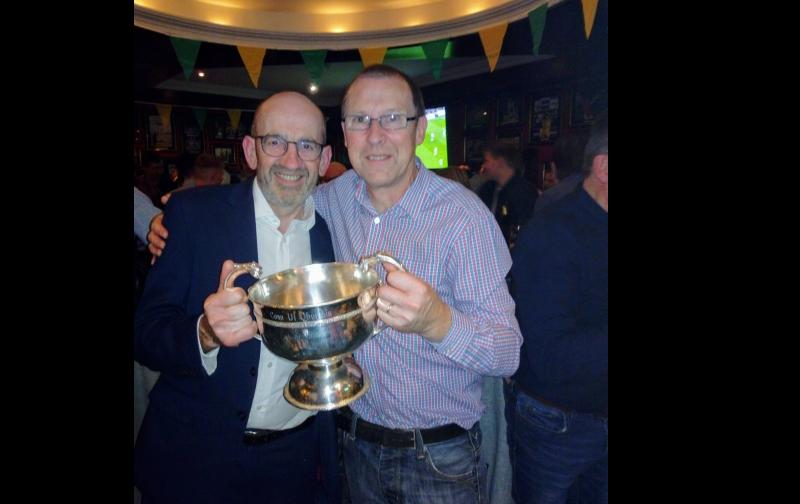 Clonmel and the sporting community of Tipperary is in mourning this week following the tragic death of Donal O’Keeffe.
The former Tipperary football captain and a stalwart of Clonmel Commercials, who won five county medals during a glittering playing career, died in a freak cycling accident in county Wexford where he lived with his family.
The accident which claimed Donal’s life happened on on Wednesday evening of last week  near Wexford town on the N25.
Donal spent two days on life support in intensive care before eventually passing away on Friday surrounded by his loving and heartbroken family.
Donal’s funeral Mass was held on Tuesday in Clonard, and was followed by cremation in Mount Jerome Crematorium.

Donal O’Keeffe worked with AIB for many years and lived in Hayestown with his beloved wife Karen.
Donal was a beloved husband and devoted father. He is survived by his heartbroken children Donal, Bobby and Aoife, brothers Tom, Sean, Diarmuid, his sister Noreen, his late brother Patrick brothers-in- law, sisters-in-law, aunts, nephews, nieces, extended family and his many friends.
Anthony O’Dwyer, Chairman of Clonmel, Commercials paid tribute to his friend and fellow clubman this week on behalf of the club.
“The club was in a state of shock over the weekend, when news broke of the tragic death of former player Donal O’Keeffe.
“Donal was a prolific player for club from under age level right up to senior. On the field of play Donal gave everything for the jersey of Clonmel Commercials. He won a county minor medal in 1981, county U21 medals in 1983 and 84 and county senior medals in 1982, 86, 89, 90 and 94. Donal also played minor, U21 and senior for Tipperary winning a McGrath Cup medal in 1989.

“He was south footballer of the year in 1987. And captained Tipperary in 1990.
“And that historic day in Mallow in 2015 winning the Munster club, meeting Donal and that smile on his face meant so much.
“Donal was a gentleman, a son, a husband, a father, a brother and a friend to all that knew him.
“Listening to comments over the last few days about Donal from players who played with him and against him Donal was held in high esteem. I personally grew up with Donal and he was someone I looked up to. Clonmel Commercials has lost a son and he will never be forgotten.
“All at Clonmel Commercials send their deepest sympathies to the O’Keeffe family.”
ADVERTISEMENT - CONTINUE READING BELOW