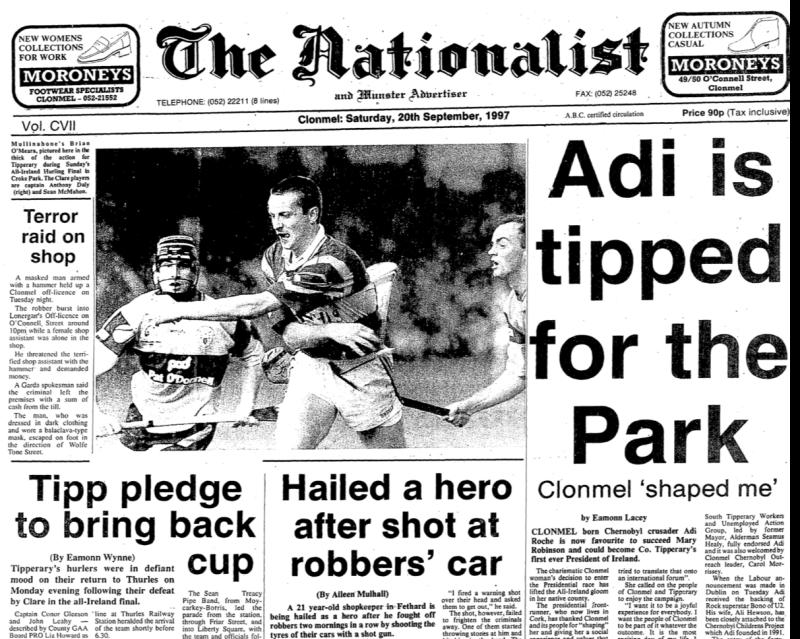 The front page of The Nationalist from September 20, 1997

Our Yesteryears feature this week takes us back a full quarter of a century to September 1997. Our lead story that week, written by Eamon Lacey, informed readers that Adi Roche was, at that point in time, favourite to win the race to become the eighth President of Ireland.

The entry of the 42-year-old Clonmel-born woman, fêted as a humanitarian heroine, had electrified the Presidential race.

The charismatic Chernobyl crusader had started her campaign very well to succeed Mary Robinson, and in her interview with The Nationalist thanked Clonmel and its people for “shaping” her and giving her a social conscience and values that have sustained her throughout her life.

Adi promised that her visit to Clonmel during her six-week long Presidential campaign would be a “special event, a celebration”.

In her interview, Cork-based Adi said:

“I want to go back to my home town because the town of Clonmel made me the person I am. I was educated there, my neighbours and friends live there. All of that has been a great strength to me. It has sustained me. Clonmel shaped me and gave me the sense of values I have.”

YESTERYEARS: Plane emergency landing in a field in Tipperary

In another story from our edition dated September 20, 1997, a 21-year-old shopkeeper in Fethard was being hailed as a hero after he fought off robbers two mornings in a row by shooting the tyres of their car with a shotgun.

Courageous Tommy Hennessy sent the criminals running in all directions in the early hours of two consecutive mornings when they tried to break into his recently-opened corner store, “The Cross Stop Shop” located at the Cashel Road Junction in Fethard town.

Also that week, a decision by South Tipp County Council to refuse planning permission for a controversial pig factory in Golden was to be appealed to An Bord Pleanála by the Glen the Aherlow Pig Producers Co-Op who hoped to convert an existing 100-sow breeding unit into a 550-sow integrated unit at Ardobireen, Golden.

Mary O’Connor, PRO for the Golden/Kilfeacle Environmental Protection Group, said that they intended to fight the proposed development “every inch of the way”.