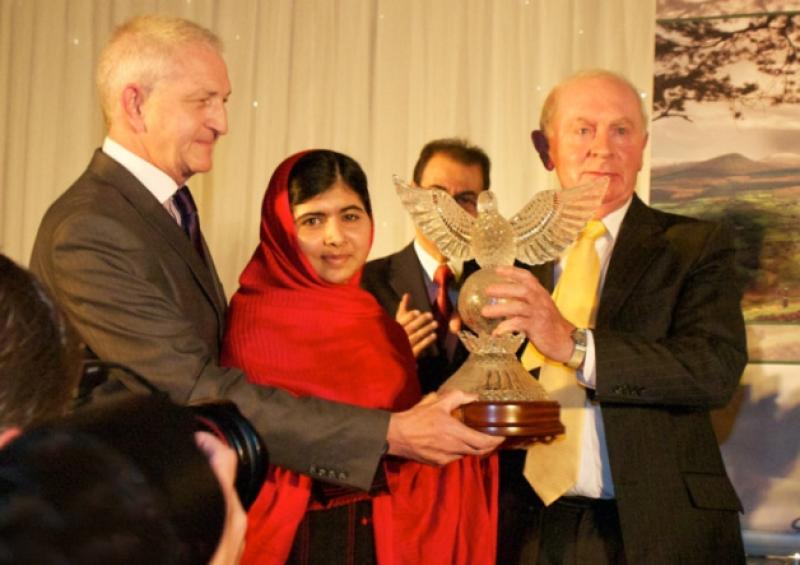 The courage of a teenager who was shot in the head by the Taliban for campaigning for girls rights and education has been recognised by the Tipperary Peace Convention.

The courage of a teenager who was shot in the head by the Taliban for campaigning for girls rights and education has been recognised by the Tipperary Peace Convention.

Malala Yousafzai travelled to Tipperary town to accept the 2012 Peace Award on Tuesday night and in a powerful address to invited guests spoke of her horrific ordeal and her determination to continue speak out for the rights of children all over the world.

Because she campaigned for the rights of girls to go to school Taliban gunmen boarded her school bus last October.They called out her name and shot her in the head at point blank range in front of her friends.

At the prize giving ceremony at Ballykisteen Hotel , Malala appealed to governments all over the world to change their laws that discriminate against women and children.

She said she would like to return to the Swat Valley in her native country and would continue her work to ensure that children and young girls all over the world should be given proper education.

Minister for Trade and Development Joe Costello said: “I applaud her singular bravery and I am delighted her efforts to champion human rights in the face of intimidation and adversity have been honoured this evening.”

Malala, while eleven years old had been secretly writing a blog for the BBC, which described the struggles faced by girls trying to receive an education under the Taliban.

Malala, was hit just above her left eye by a bullet that grazed the edge of her brain.

She was airlifted to Britain and treated at Birmingham’s Queen Elizabeth Hospital, where she had a titanium plate and cochlear implant fitted.

Malala, who has been called the world’s most influential teenager, is a nominee for this year’s Nobel Peace Prize.

Malala, who celebrated her 16th birthday a month ago,said terrorists had destroyed the paradise where she lived in the Swat Valley and turned it into a hell.

She vowed that violence would never triumph over human rights and appealed to everybody to speak for for justice and equality.