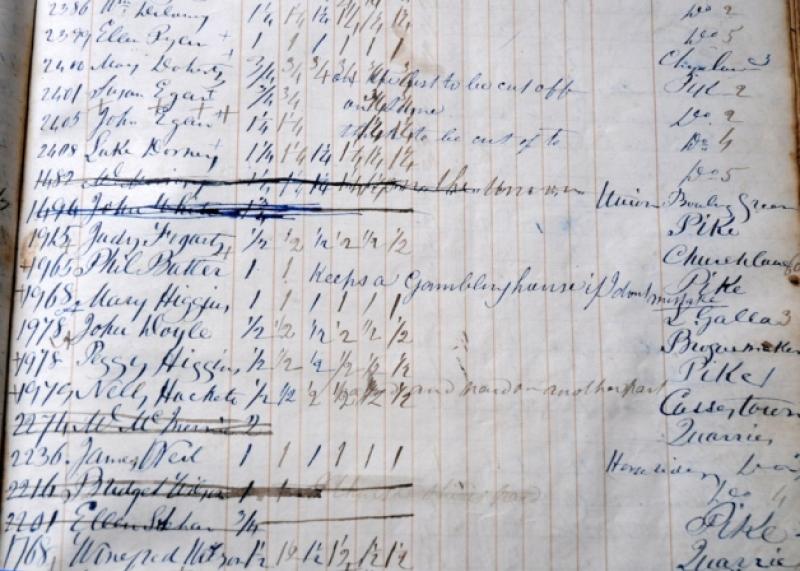 The recently discovered ‘Gratuitious Relief Ration Record Book,’ (or the ‘Distribution Book,’ as it was also called,) for the electoral divisions of Holycross, Thurles and Ballycahill in 1847, has now been digitised, allowing an instant search facility for those anxious to trace their family roots.

The recently discovered ‘Gratuitious Relief Ration Record Book,’ (or the ‘Distribution Book,’ as it was also called,) for the electoral divisions of Holycross, Thurles and Ballycahill in 1847, has now been digitised, allowing an instant search facility for those anxious to trace their family roots.

This extremely rare book, found in a private collection, is now on public display at St. Mary’s Famine Museum in Thurles and will be available to be viewed by all those attending the forthcoming Thurles Sarsfields International Festival Of Gaelic Sport (July 4th – 12th 2014), and all visitors to Thurles.

This book, which is of huge interest locally, contains the names of those who were classed as paupers in the hinterland / townslands of these areas, during that most harrowing period of the Great Irish Famine, referred to as ‘Black ‘47’.

Just over 3 million Irish people were being supported by outdoor relief in July 1847. To those it supported, covering the electoral divisions of Holycross, Thurles and Ballycahill while providing records of the food rations distributed in the period May – Sept. `47 and part of `48, it was a very humiliating and an insufficient system. Nevertheless it did keep starvation at bay for a very sizeable portion of Tipperary people at that crucial time in Black ’47.

Meanwhile four other ancient manuscripts, one found close to Thurles here in Co Tipperary are to undergo special preservation work and to be digitised and put on show beside the Book of Kells, in Trinity College, Dublin.

These priceless manuscripts, going back to the fifth and eighth century, will include the eighth century” Book of Dimma,” possibly written originally at St. Cronan’s Monastery, Roscrea, Co Tipperary.

In 1789, the Book of Dimma was supposedly discovered in a small cave on “The Devils Bit” near Thurles. The little known Book of Dimma, was preserved by Thady O’Carroll, Prince of Ely, and later during possibly the mid-twelfth century was encased in a rich gilt case. The book is a copy of the four Gospels written in Old Latin and is representative of Irish ‘Pocket Gospel’ manuscripts.

The book, which had a blessing to the sick and dying added in the 10th or 11th century, can be viewed in Trinity College, Dublin, together with many other articles of Ireland’s rich historical treasures found in Tipperary, now bringing prosperity to our capital city’s economy at the expense of Tipperary and indeed mid rural Ireland’s expense.