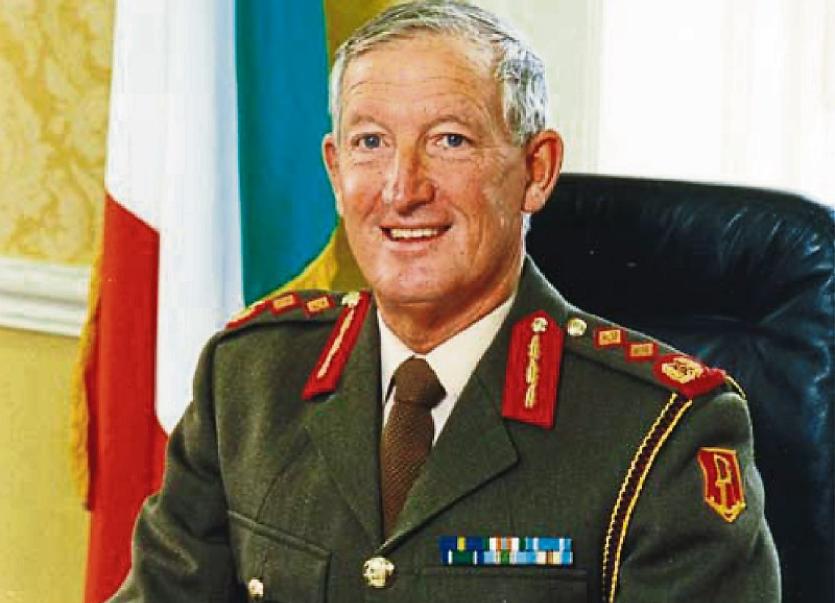 The death occurred on Monday of last week of Lieutenant General David Stapleton, late of Anne Street, Clonmel, who was a former Chief of Staff of the Defence Forces.

Lieut. General Stapleton, who was in his late 70s, died peacefully at his home at River Court, Newbridge, Co. Kildare, surrounded by all his family.

He joined the army as a member of 30th Cadet Class in 1955 and was commissioned as a Second Lieutenant in the Supply and Transport Corps on November 25 1957.

Lieut. General Stapleton served with the United Nations (UN) in the Congo and as a UN military observer in Syria in 1972-73 throughout the Yom Kippur War. As a major general in the mid to late 1990s he returned to Damascus as Force Commander of UNDOF, the UN Disengagement Observer Force, before his appointment as Chief of Staff in August 1998, a position that he occupied until September 2000.

During his last tour of duty in Damascus he liaised between the Israeli and Syrian governments through their military liaison officers, as well as briefing foreign delegations and ambassadors. He had right of passage across the border, the only person with such a right guaranteed by both sides.

He held a number of significant appointments throughout his career and was awarded a Distinguished Service Medal (DSM) for his outstanding service.

He was promoted to full colonel in September 1991 and became a brigadier general in 1995. He was moved up another rank to major general to become Quartermaster General.

He completed two tours of duty in The Lebanon and also served in Namibia.

He also made a considerable contribution to the formation and development of the Representative Association of Commissioned Officers (RACO) in its formative years as the association’s first president.

A proud Clonmel man, Lieut. General Stapleton never lost touch with his roots and was a regular visitor to his home town.

He was credited with playing a key role in keeping the former Kickham Barracks open during his tenure as Chief of Staff and following his appointment was delighted to receive a civic reception from Clonmel Corporation.

While serving abroad he was said to have had a particular affinity with Clonmel troops who were also serving overseas.

He was a talented Gaelic footballer with Clonmel Commercials in his younger years, lining out with the club's Minor teams that won the South championship in 1954 and the South and County championships the following year.

He also played Minor and Senior Football for Tipperary and was on the Minor team that defeated Kerry in the 1955 Munster Championship final, after a replay. The team went on to beat Mayo in the All-Ireland semi-final before losing to Dublin in the All-Ireland final.

He was actively involved in the community in Newbridge and served with local charitable organisations.

Lieut. General Stapleton was buried with full military honours at

He is survived by his wife Maureen, son David, daughters Jennifer, Barbara and Aimee, sons-in-law Eamonn, Seamus and Brendan, daughter-in-law Regina, ten grandchildren, his sister Nessa, nephews, nieces and other relatives, to whom sincere sympathy is extended.