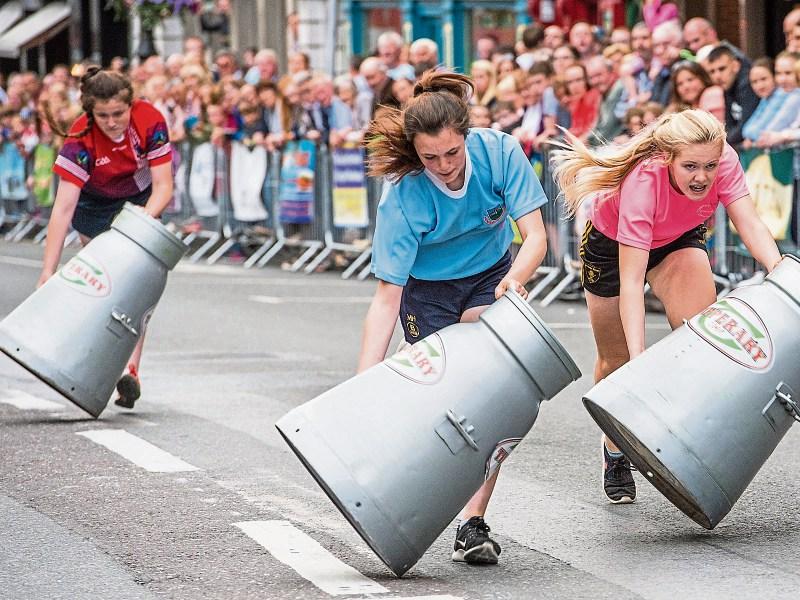 This weekend was a compelling one in Tipperary town as some of the finest local athletes took to the town’s Main Street to entertain thousands of onlookers with the 2017 All-Ireland Churn Rolling Championships.

The sport was designed by workers at Tipperary Co-op for the 1964 Tipperary town festival. The Co-op revived the sport in recent years and it has once again become the key feature of the annual ‘It’s a Long Way To Tipperary’ festival’.

This year’s championships took place on the evenings of Friday and Saturday and included athletes of all ages.

Friday’s event were opened by the youngest participants – the Milk Maids – whose task it was to run the length of Main St balancing a glass of milk on a tray, without spilling a drop.

Then the main event began, with boys’ and girls’ junior heats giving the crowds a sample of what it takes to run at speed while in control of a traditional 44kg milk churn in front of roaring crowds. But the evening culminated in the Ladies’ Senior Championship.

The Ladies’ Senior Championship is usually held on the final evening of the event, but this year it was held on Friday evening to coincide with the crowning of the 2017 Pride of Tipperary.

The only certainty here was that a new champion would lift the coveted cup, as the reigning title holder - two-in-a-row winner Geraldine Kinane - was unavailable for this year’s contest.

So it was only a question of who would gain the right to hold the tile until next year’s challenge.

As every keen observer predicted, the semi-final was a nail-biter, with Violet Ryan crossing the finishing line in just 15.36 seconds.

But when it came to the final, the pace increased further as Violet broke that record in a time of 14.82 seconds. Close behind her was Denise Ryan, followed by Eileen Ryan and Mairead Eviston.

The Junior Championships got the following evening’s proceedings started with some incredible displays of skill, strength and speed.

But the main event was yet to come – the Mens’ Senior Championships. This was always going to be a hotly-contested and eagerly-anticipated race, as reigning champion Brian Roche was defending his title and aiming to take a place among the select few athletes who have achieved a ‘three-in-a-row’.

But Churn Rolling is a sport that can change the fortunes of a contestant in the blink of an eye. Despite having won his semi-final, Brian found himself challenged by Kevin Kinane, from Lattin, in a final which turned out to be a race of inches. Ultimately, Kevin Kinane won the contest with a spectacular time of 12.66 secs.

This year’s All-Ireland Churn Rolling Championship once again attracted thousands of people to the streets of Tipperary.

Neither this great sport nor the Tipperary Festival would have been as successful as they are without the hard work of the many volunteers whose commitment over the last number of months cannot be overstated.

But the backing of Tipperary Co-op was also vital, for both the festival and the sport of Churn Rolling.

The Co-op’s policy of contributing to the community continues to benefit the town and strengthen the links between Tipperary Co-op as the largest employer in the area, and the town that supports it so well.

Churn Rolling was developed at Tipperary Co-op more than 50 years ago, and to this day it has continued to sponsor and promote the sport.