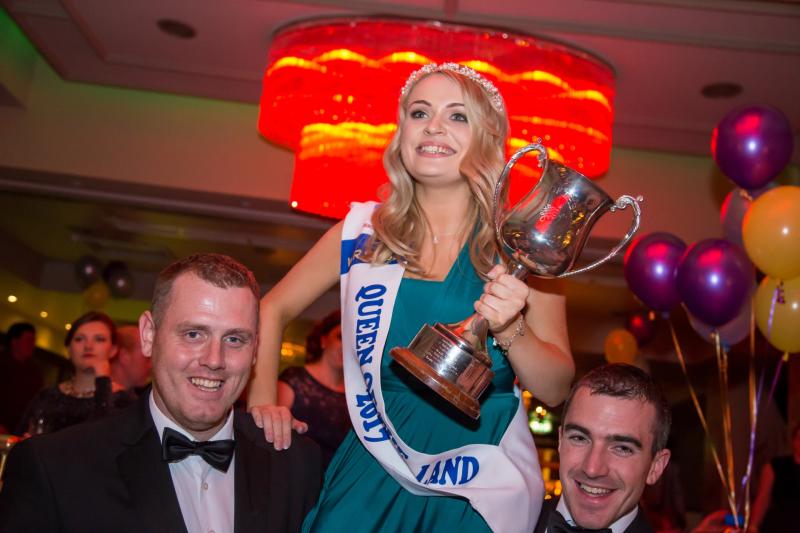 Emma Birchall from Kildare was crowned the W.R. Shaw Queen of the Land for 2017 with Head Escorts Fergal Leonard and Ronan Phelan. Photography by Paul Moore

Emma Birchall from Kilcullen in Kildare was crowned the 53rd W.R. Shaw Queen of the Land Festival winner for 2017 in the Bridge House Hotel, Tullamore on the Sunday night of the Festival. The 2nd runner-up was Melissa Glynn from Cranmore outside Athlone in Roscommon and 3rd runner up was Lucy McClymont from Dumfries in the Dumfries and Galloway region in Scotland.

Contestants were judged on a range of attributes including for appearance, dress sense, rural knowledge and elocution. The festival, which has grown from humble beginnings and is now one of the most prestigious events on the Offaly social calendar. Huge crowds attended this year’s festival from all over Ireland due, in no small part, to the fantastic line up of entertainment and 31 entries from all four corners of the country along with our English, Scottish and Northern Ireland Queen.

The weekend saw 31 Queens descend on the Bridge House Hotel, Tullamore from early Friday morning before they headed off on a tour to Clonmacnoise and to Tullamore Dew Heritage Centre. After the official opening, the Queens were treated to a cocktail making class on Friday evening and afterwards, to the Palace Nightclub for a 90’s classic night with DJ Dave Pearse.

On Saturday morning, the girls were up early for interviews with our esteemed judging panel after which they were beautified by Olivia’s Beauty Boutique and treated like royalty by Ritzy’s Hairdressing, Tullamore. Each Queen was then greeted by their escorts in Hugh Lynches and were interviewed on-stage by Rock on Paddy. On Saturday night, after the Queens’ on-stage interviews, the crowd was entertained by Transmitter, Legacy and Joe Wynne until late. Sunday saw the Queens’ and their escorts head to Cosmic Bowl, Tullamore before going onto Mass and the Old Harbour Bar for refreshments afterwards. On Sunday evening, the highlight of the weekend, the gala banquet with music from White Diamond and dancing continued until late into the early morning.

The Escort of the Year was Fergus O’Rourke who was selected by the Queens’ after they were dazzled by his charm. Fergus received a weekend stay for two in the Bridge House Hotel and a €300 clothing voucher from Guy Clothing.

Announcing the winners, judge and reigning Queen Karen Elliffe complimented the Queens for being excellent ambassadors for their clubs and counties and wished the incoming 2017 Queen the very best of luck for the coming year. Gerard Mahon, chairperson of the committee, paid tribute to the 31 girls who took part and said, “The committee is very much looking forward to working with Emma during the year. She will make an excellent ambassador for the W.R. Shaw Queen of the Land Festival.”  According to Gerard, “We have had another successful Queen of the Land festival, thanks in no small part to our main sponsors W.R. Shaw, the associate sponsors, committee and the travelling supporters that came from all over the country and beyond to Tullamore for the weekend.”