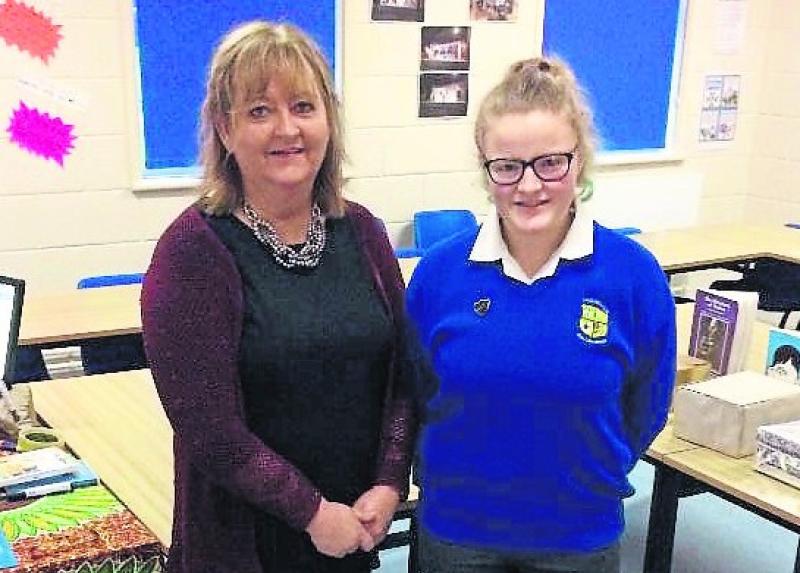 Mary Kate Cronin, 1st year has successfully competed in the semi-final of the ninth annual Poetry Aloud competition, organised by the National Library of Ireland (NLI) and Poetry Ireland.

Mary Kate, who is from Cloneen and her classmate Claire O’Brien from Killenaule represented the school in the semi-finals which were held in the National library on the 16th and 17th of November. While both girls were fantastic Mary Kate will now proceed to the national final, which will take place in the National Library of Ireland in Dublin on 1st December. The event will see 31 students from across the country compete in the junior, intermediate and senior categories for the Seamus Heaney Poetry Aloud Award.

According to the girls English Teacher Mrs Teresa Regan “we had a fantastic open night at the school last Wednesday with a massive turn out. Both girls performed and were amazing. People were just in awe of their delivery and confidence.”

Poetry Aloud is an annual poetry speaking competition for post-primary school students across the island of Ireland and was launched in 2006 as Yeats Aloud, becoming Poetry Aloud in 2007. Since then, it has grown enormously from just a few hundred entries to 1,800 entries in 2017.

The late Seamus Heaney was a significant supporter of Poetry Aloud. In 2009, he was presented by the British Library with the David Cohen Prize for Literature.

In addition to the main award, the winner each year nominates the recipient of a subsidiary prize. In nominating Poetry Aloud for the award, Seamus Heaney cited the extraordinary way in which the competition seeks to celebrate the joy of speaking and listening to poetry as well as the fact that there is a strong North-South dimension to the competition.