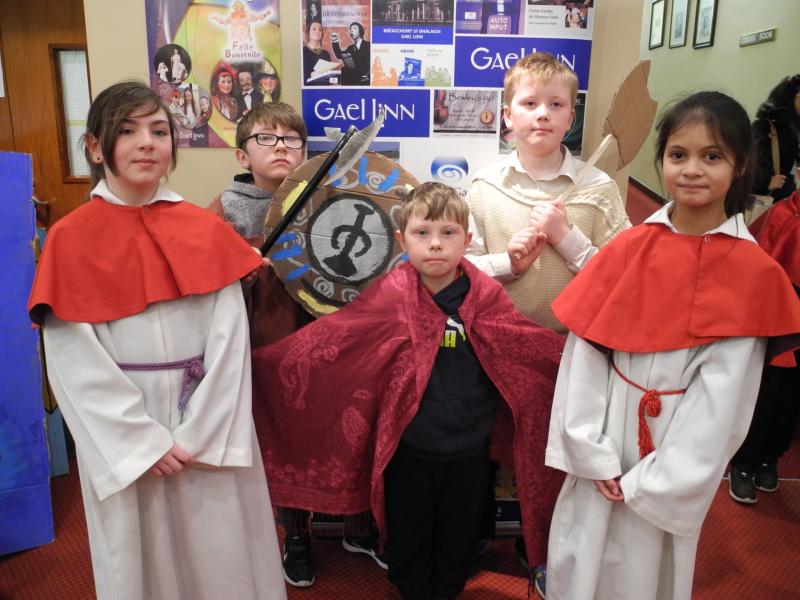 Ballinure National School were among the award-winners at the recent Coirm Gael Linn festival held in the Fermoy Youth Centre/Palace Theatre on Wednesday last, 7 February 2018.

Almost  300 exhuberant young performers from counties Cork and Tipperary  tread the boards of the theatre at this annual celebration of music and drama.  The schools staged variety shows  incorporating music, singing, dancing, story-telling and acting – all  ‘as Gaeilge’ – on a theme of their own choice, with pupils from first to sixth class involved.   The auditorium was filled to capacity and the appreciative audience, comprising schoolchildren, parents and teachers, were treated to a great display.  They were also entertained before and after each show by the popular entertainer, Giggles the clown!

While Coirm Gael Linn is  not a competition, each show is reviewed by a guest adjudicator and a written critique is given to each teacher.  At the adjudicator’s discretion, special merit awards or ‘gradaim’, are also presented for outstanding performances by individuals or ensembles. Such was the standard of shows in Fermoy that Liam Mac a’Mhaoir presented ‘gongs’ galore to the participants.  He complimented teacher Mairéad Ní Ghliasáin and young cast of Ballinure National School and presented them with two awards for their imaginative, musical and polished production of ‘Taisce sa Phortach’ ( or ‘Treasure in the Bog’).

Funded by Foras na Gaeilge, Coirm Gael Linn is a popular event on the school calendar, and a total of nine festivals will be held at various venues nationwide before the end of March. ‘Gael Linn is this year celebrating its 65th anniversary, and the organization has a long tradition of using the arts as a medium for promoting the Irish language among young people’, Seán Ó Ceallaigh, National Schemes Manager, Gael Linn comments.  ‘And as 2018 has been designated as Bliain na Gaeilge, we hope in particular that the Coirm festivals will provide a positive and fun experience through Irish for hundreds of primary school pupils’.