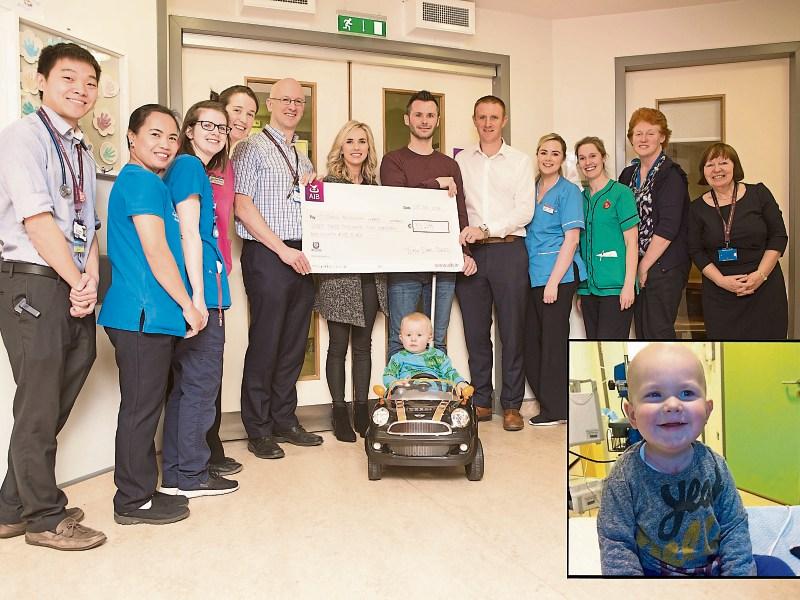 The family of toddler Evan Jones, who passed away in 2017 following an eight month battle with a rare form of cancer, have raised a total of €33, 285 for the St. Johns Oncology Ward in Our Lady's Children's Hospital Crumlin.

The Newport family, who raised the money through a sponsored fun run last year, say they have been blown away by the unwavering support they received. Over 1,400 people lined out last October to remember the little toddler and raise money for the hospital unit that had lovingly cared for Evan throughout his treatment after he was diagnosed with a malignant Rhabdoid Tumour in the summer of 2016.

“Every single cent raised by Team Evan Jones will go towards the St. John’s Ward in Crumlin for frontline care. We were very conscious that the money would be put to the best possible use and the staff in St. John’s are an amazing group of people who know exactly what is needed in the unit,” Evan’s father, Paddy, told the Tipperary Star.

Following the toddler’s diagnosis with a rare form of cancer in mid 2016 he was placed on an intensive round of chemotherapy and radiation treatment as well as undergoing a nine hour operation to remove a tumour. But despite every obstacle in the brave toddler’s path, he remained a bright and cheerful “ray of light” which helped inspire people the length and breath of the country.

“We had so many people following Evan’s story and even today people who had never met him come up to us and tell us how much he encouraged and inspired them,” says proud dad Paddy who adds it was Evan’s cheeky, cherub smile that helped to capture the hearts of so many in his native hometown of Newport and further afield.

Central to the success of the fun run was the ‘Team Evan Jones’ committee, made up of nearly 40 volunteers, and who Paddy describes as the “hardest working group” he’s ever met, who worked tirelessly to get as many joggers, walkers and runners out pounding the pavement in October.

“We want to make the Team Evan Jones Fun Run an annual event and we are determined to run it again this year. Evan was an inspiring little boy and although he was only here for a short time, he made a huge impact on everyone he met and we feel it very important to continue his legacy,” he adds.