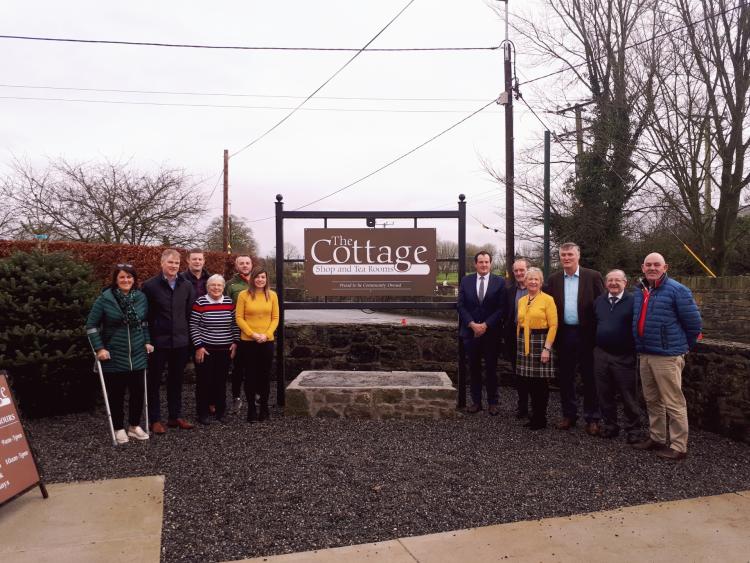 When Loughmore Cottage first opened its doors in 2012, few could have predicted the impact the small, community run tearoom would have in the challenging battle against rural isolation.

Now seven years on, and with a slew of awards under its belt, the famed cottage, which has inspired countless communities across the world, has begun its latest chapter by moving to a new premises - albeit only a mere stones throw from its original home.

Located in one of Loughmore’s oldest buildings, the newly opened tearoom and shop is a bright, welcoming centre which retains all of the former cottages old world charm and character while meeting the needs of a growing customer base.

On December 22, the tight knit parish was presented with an early Christmas present when the new Loughmore Cottage, located in a renovated farmhouse dating back to the 19th Century, opened its doors to the public.

A tearoom with a twist

The success of Loughmore Cottage is a remarkable story, made all the more incredible given that it was launched during a recession.

Since its inception the Cottage has provided support and revenue to over 50 local food and craft suppliers, acted as a meeting place for several clubs, associations and crafting groups as well as providing a lifeline and welcoming place for many of those that live alone in rural Ireland.

Its story has been told on countless occasions and over the last seven years, co-founder Mary Fogarty has perfected the art of sharing the tale of the tearooms origin.

Faced with a lack of basic services and amenities in the area, Mary, along with neighbour Maeve O’Hair, decided to take action into their own hands, and inspired by the work of UK based organisation the Plunkett Foundation which helps rural communities establish co-operatives, researched the possibility of setting up their own tearoom and adjoining shop to serve the needs of the wider Loughmore community.

The idea was an immediate success and the not-for-profit co-operative quickly placed the one-time declining village of Loughmore firmly back on the map by providing a source of local employment, a thriving tourism business and a much needed lifeline for those suffering from rural isolation. 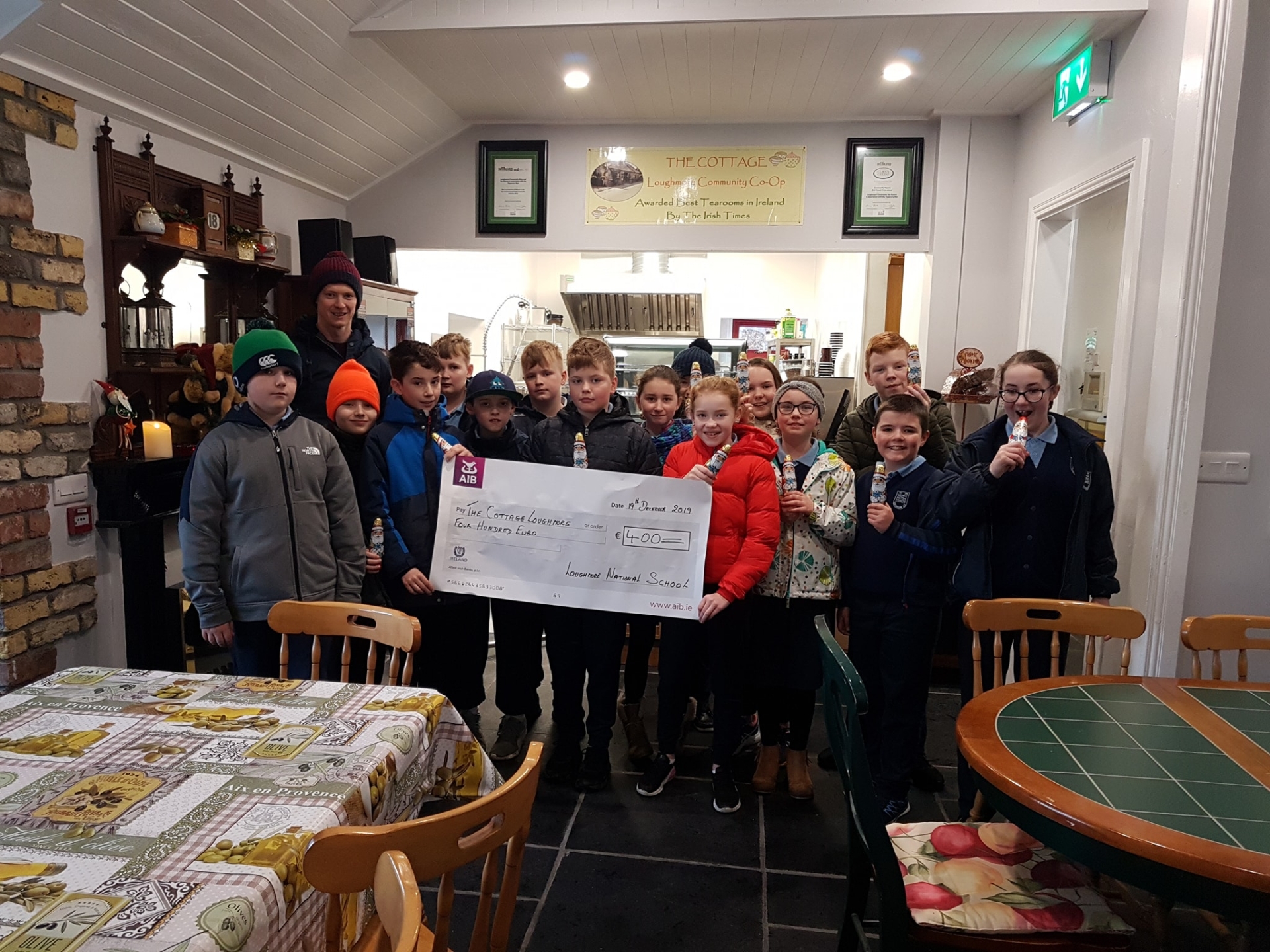 For the best part of a decade, the cottage has acted as a meeting spot for the county’s Diaspora who seek out a comforting place to catch up with family and friends during return visits home, a well worn right of passage for teens eager to gain work experience for their CV’s and a beacon of light for those looking to meet a friendly face.

Central to the tearooms success was integrating the local community at the core of the project from the outset. When the project was in its infancy, the entire community was invited to purchase shares in the cottage costing €10 per share. By 2015, the cottage had over 300 shareholders in the business.

In mid 2019 the Loughmore team undertook a monumental challenge by moving to a new premises which would allow them to cater for bigger visitor numbers, ensuring the tearooms continued survival.

While the ambitious project would be generously supported by North Tipperary Leader, Tipperary County Council and Clann Credo, the Cottage was also required to secure a portion of the associated costs itself through fundraising efforts.

Therefore when the call rang out looking for local support to raise the necessary €30,000, there was only one response from the wider community.

A meeting in the local hall to launch the initial fundraising campaign required extra chairs being set up to cope with the unexpected turn out of locals eager to help keep the vibrant heartbeat of the community alive.

Locals and first time visitors to the cottage quickly rowed in behind the aptly named ‘Tip the Teapot’ campaign, pledging their donations in person and via an online GoFundMe account. Local community groups also joined forces to give back to the centre that had become their meeting hub while pupils from the nearby national school also got stuck in coming up with innovative ways of raising the much needed cash.

In just six short months the campaign has raised nearly €18,000 of its target with donations continuing to flow in from far and wide. 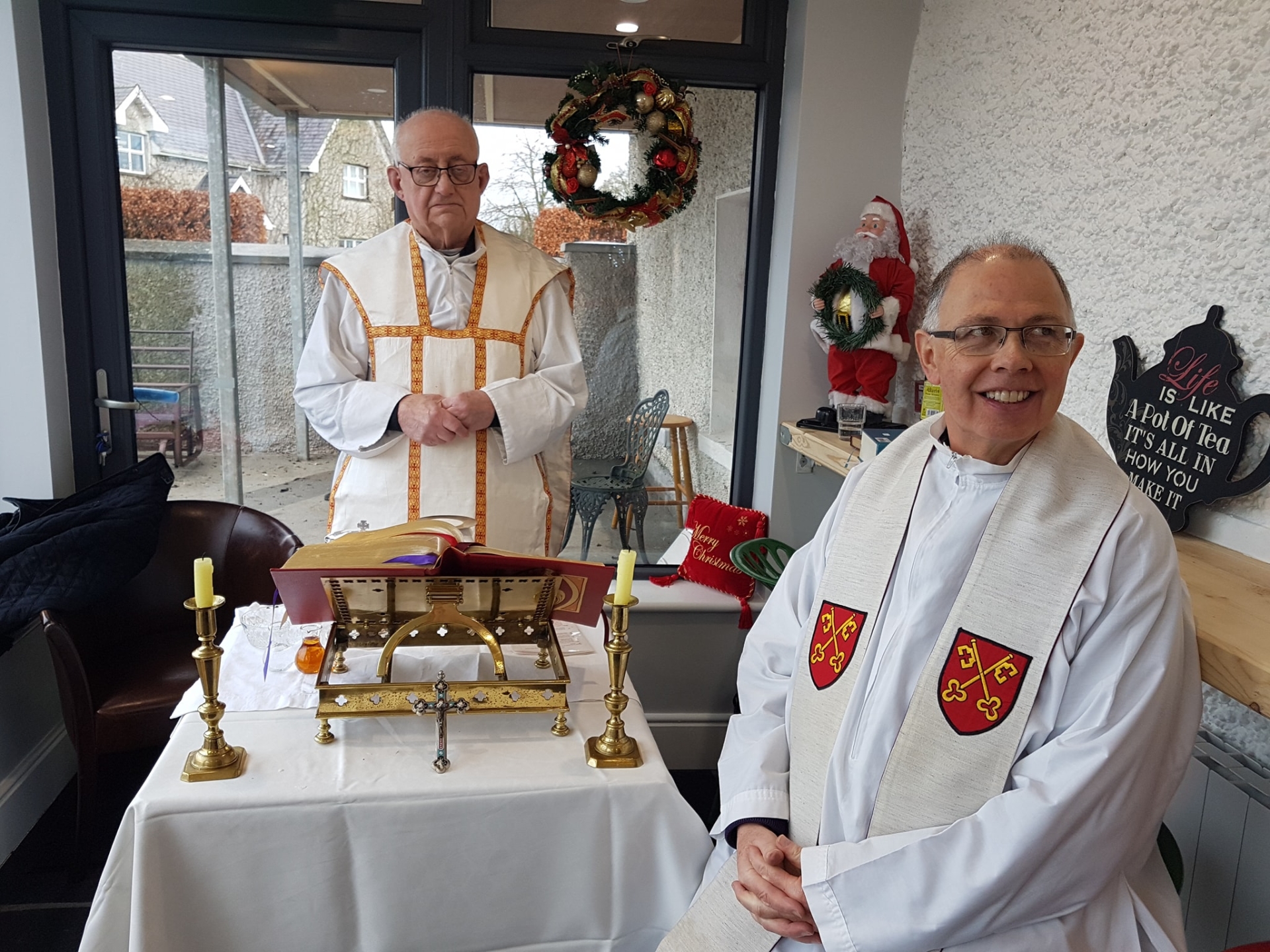 Monsignor Maurice Dooley and Fr. Tomás O'Connell blessing the cottage on December 21 before it opens to the public

For Loughmore Cottage the art of old school hospitality is a central aspect to what makes the tearoom so unique. First time visitors are given the same genuine, warm welcome as those reserved for daily customers.

For many visitors, entering through the famed half door of the cottage is akin to taking a trip back in time. The shop’s compact store stocks a mix of cupboard essentials, such as bread and milk alongside a mix of artisan products supplied by local producers and the all important bags of penny sweets.

Freshly baked cakes and buns greet customers upon arrival while the heady aroma of the Cottage’s hearty homemade soup is served up alongside brown bread and lashings of real butter which diners can enjoy in the new sun room area or seek out a quieter spot in the much sought after ‘snug corner.’

Today the new tearoom can accommodate up to 40 guests and Mary says inclusivity was key when planning the various elements of the new cottage including the provision for wheelchair access, off street parking and state of the art accessible toilet facilities.

According to Mary, every member of the community are an important piece of the puzzle that helps make the tearooms a true home away from home.

From young musicians performing an impromptu jig and reel set, to the friendly banter from the local knitting or cycling clubs, everyone immediately feels at home the moment they walk through the Cottage’s doors.

“There’s something very special about what we have here in Loughmore and I really think we have captured that sense of belonging and togetherness again in our new tearoom,” she says, a sentiment echoed by the projects building contractor Tony McCormack who astutely remarked that while he may have “put the body” into the new tearoom, it will be the Loughmore team who will “bring the soul.” 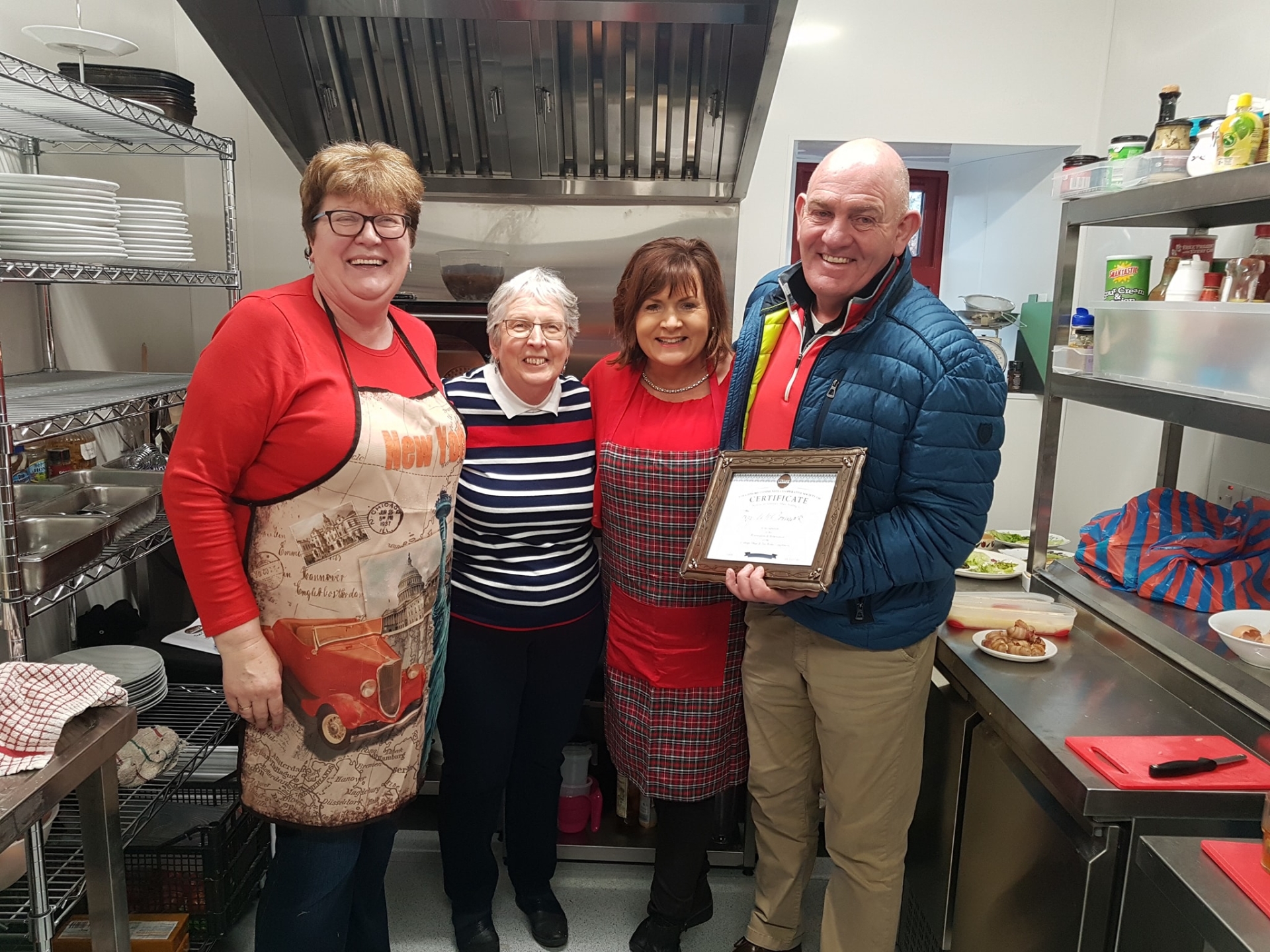 Since opening its doors, Mary and the Loughmore team have welcomed thousands of visitors from community groups across Ireland eager to replicate the tearoom’s success in their own declining towns and villages. In 2018, the Cottage team were heralded as pioneers in helping to combat rural isolation culminating with Mary representing Tipperary County Council at a social innovation workshop in Hungary.

As an added bonus for the Loughmore team, the Cottage was also heralded as one of the most important community led projects to emerge from Ireland in the last 10 years by Dr Senan Cooke who documented the value of the co-operative in his book The Enterprising Community.

“We are so thrilled by what we have achieved. Our new tearoom retains all the best bits of the old cottage while also meeting the needs of our growing customer base. I can't thank people enough,” smiles Mary - a woman on a mission to ensure every village retains its heartbeat, one cup of tea at a time. 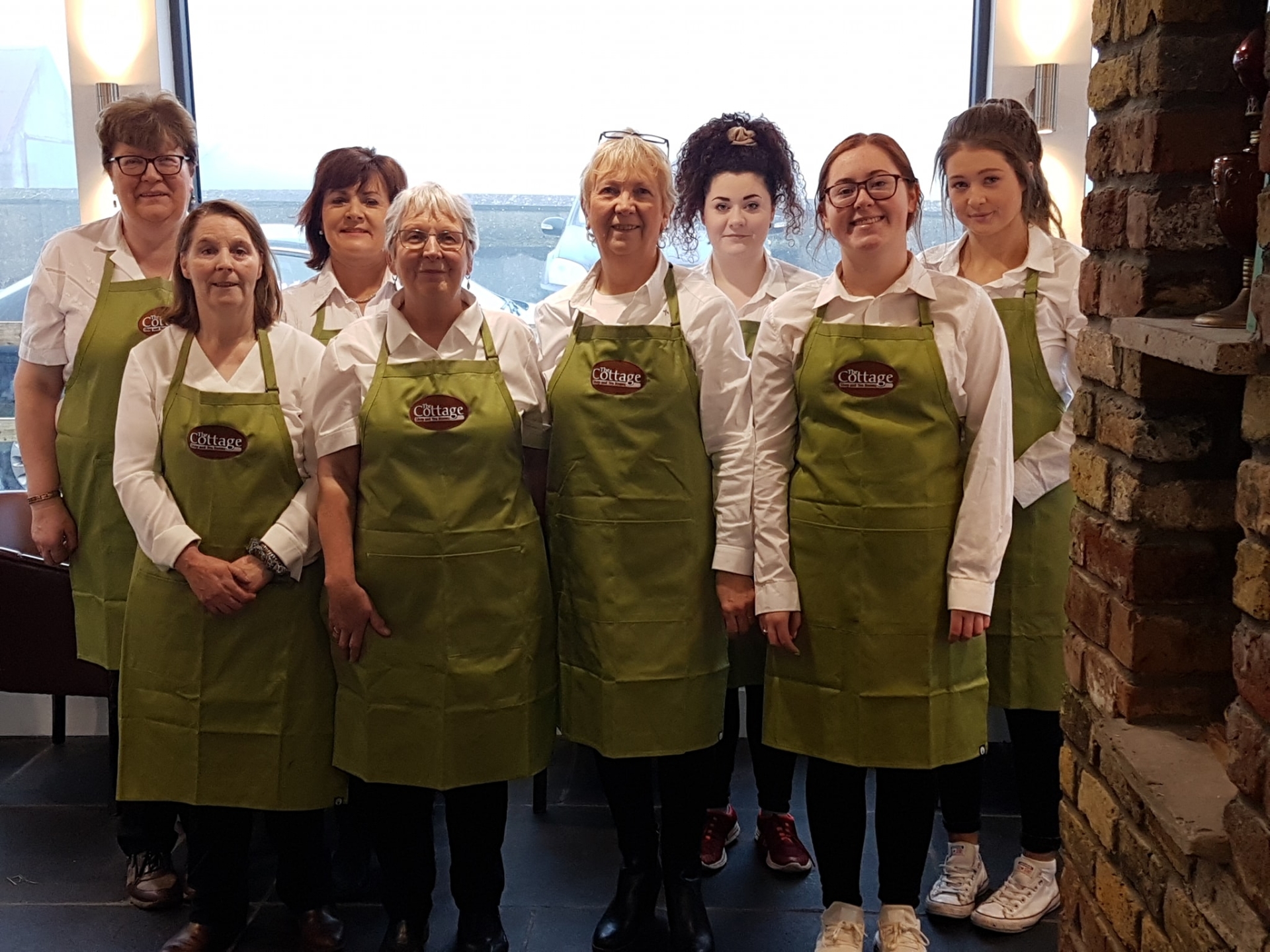 A sincere thank you

Loughmore Cottage wishes to sincerely thank all those who have supported the tearoom and shop since it launched in 2012, its staff, volunteers, producers, suppliers and valued customers.

A special thanks also to Maureen Cullen, Loughmore who recognised that the new building was vacant and pointed out that it would be an ideal location for our new premises, David and Mary Ryan for agreeing to lease the building to Loughmore Community Co-op. Soc. Ltd, North Tipperary Leader who funded the project by 75 percent, Tipperary County Council who funded the project by 15 percent, Clann Credo who financed our bridging and loan facilities, Tony McCormack, building contractor, Birr and his team of workers, Gareth McHugh, project manager, McHugh Glynn Associates Templemore, the amazing staff, volunteers and food producers at The Cottage and the hardworking and dedicated Loughmore Community Co-op Soc Ltd management team.