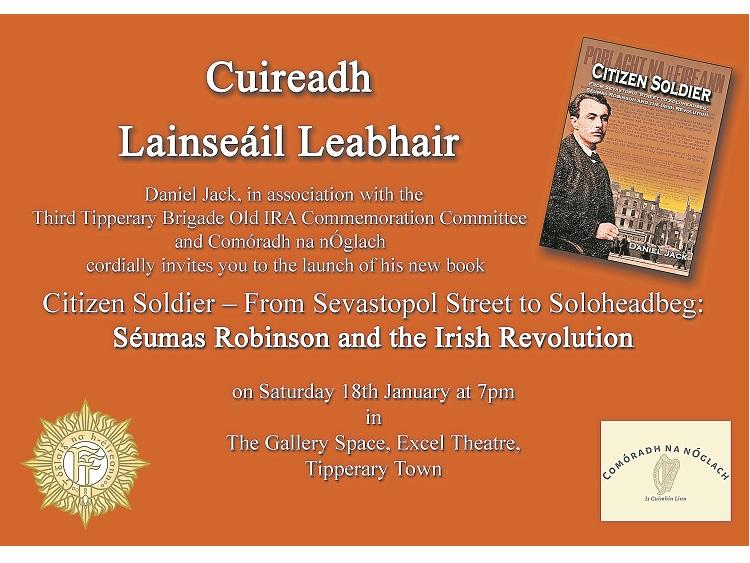 The Third Tipperary Brigade Old IRA Commemoration Committee are delighted to co-host the launch of his book, Citizen Soldier, in the Excel, Tipperary, on Saturday next at 7.00pm

The Irish War of Independence produced many outstanding characters, some of whom became household names.
In the cases of some, like Dan Breen, Ernie O Malley, Liam Deasy, and Tom Barry, to name a few, their enduring fame was perpetuated by the fact that they left vivid memoirs detailing their exploits.
Yet few achieved as much as Brigadier Seumas Robinson, OC of the Third Tipperary Brigade, the IRA's most elite fighting unit during that war. Indeed, to a large extent he, and his achievements, have been largely overlooked or ignored by historians and commetators. Yet he moulded the Third Brigade into a lethal freedom-fighting force.
In January 1919 he re-ignited the War of Independence at Soloheadbeg. The following month he issued the "Nodstown Proclamation". The philosophy of war enunciated in it explained the principles by which he intended to fight the war. No such document was issued by any other IRA Brigadier. And he achieved the goals he set himself.
Unfortunately he didn't write his memoirs. That lack has now been largely rectified by his kinsman and fellow Belfast native, Daniel Jack. The Third Tipperary Brigade Old IRA Commemoration Committee are delighted to co-host the launch of his book, Citizen Soldier, in the Excel, Tipperary, on Saturday next, January 18, 2020 at 7.00pm.