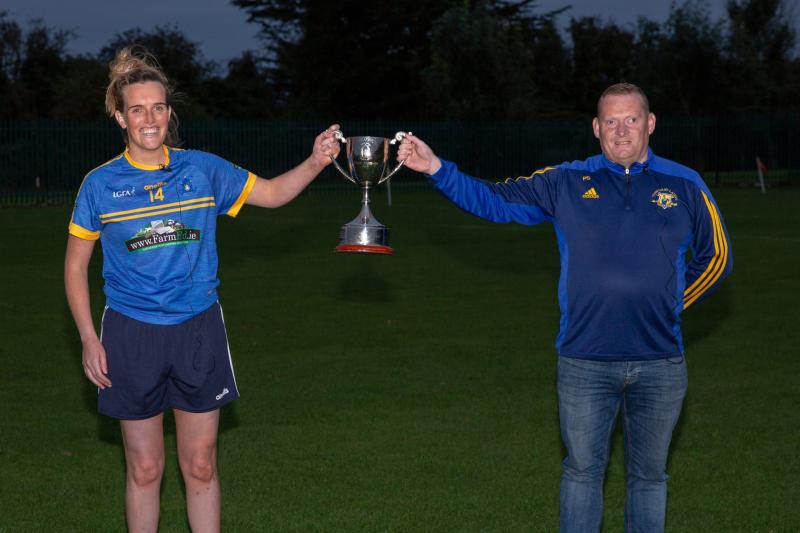 Brian Boru’s claimed the Frank O’Brien Cup as they defeated Aherlow in an exciting Division 1 Final played in Dr. Morris Park, Thurles on August 30th last.
An exciting affair it had all spills and thrills that come with two great rivals meeting. Aherlow were at a disadvantage from the outset with three of their inter county stars out injured including Caitlin and Anna Rose Kennedy and also Emma Morrissey. However Brian Boru’s were deserving winners and were as captain Tricia Hickey accepted the Cup which as she pointed out was named after one of the founding members of Brian Boru’s Ladies Football Club,
Aherlow opened the scoring with a point from Grainne Condon putting them into an early lead. Eimear Myles levelled the scores before Eimear Looby put Aherlow back in front and it was nip tuck as the sides scores up until mid-way through the half. However as the first water break beckoned Brian Boru’s notched up three unanswered points to put Borus 0-7 to 0-3 before Keith Delahunty signalled the break. On the resumption Brian Boru’s got into their stride putting Aherlow goalie Emer McCarthy to the test. The Aherlow Keeper pulling off a magnificent save from Mairead Morrissey before Eimear Myles finally goaled in the 20th minute. followed quickly by a point from Mairead Morrissey. Aherlow struggled against the wind for scores and only managed to tag on a single point from Una Carew in the run up to half time. Eimear McCarthy keeping her side in it as she saved a penalty from Jennifer Grant who replaced Tricia Hickey just before the waterbreak.The score at the break reading Brian Boru’s 1-9 Aherlow 0-4.
Aherlow again got off to a good start after the break scoring two points one each from Ciara McCarthy and Sara Morrissey. An Alanna English goal in the 37th minute though pushed Brian Boru’s however widened the gap again. Aherlow fought on and were rewarded with a goal in the 45th minute from Sara Morrissey when Brid Condon soloed through the Brian Boru’s setting up Morrissey for their much-needed goal. However, it was the last of the score of the game for Aherlow as Brian Boru’s quickly responded with a point from Cliona O’Dwyer and the game was finally killed off when Alanna English got her second goal of the game just before the second water break to leave the score at Brian Boru’s 3-11 Aherlow 1-6.
On the resumption Shona Lang put Brian Boru’s further out of reach with a well taken point to wrap up the scoring for the evening. Aherlow were reduced to thirteen players as first Maire Condon was red carded for an off the ball incident. Minutes later frustration seemed to get the better of Aherlow when Siobhan Condon received her marching orders with a straight red card after a late tackle on Boru’s Sinead O’Farrell in the dying minutes of the game.