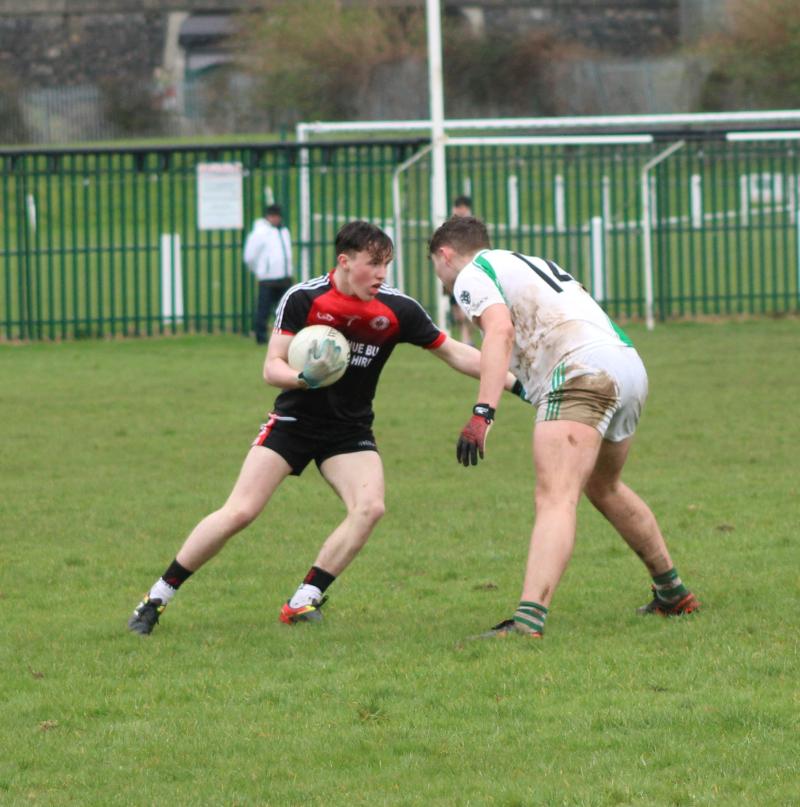 There was a return to football action for Tipperary secondary schools last Wednesday as the MacGabhann Cup (Senior County A Championship) began. It featured a repeat of last year’s final as Clonmel High School faced the Abbey CBS, Tipperary town, this time a quarter-final tie, at Sean Treacy Park on Wednesday.

Both schools were playing their first competitive senior games since the County Final on March 11,  2020, just prior to Covid restrictions but there was no signs of rustiness as both sides gave their all for the full 60 minutes.

It took a late Emmet Butler goal for the Clonmel side to settle this thoroughly entertaining battle in which both teams showed great heart and determination with no little skill in what was a fine advertisement for school’s football in Tipperary.

A bright opening from the Tipperary Town side put them ahead but the High School replied with scores of their own before Chris Ryan scored an opportunistic goal to ignite the Clonmel challenge. The Abbey hit back with some great scores as exchanges were tight throughout the opening period and the sides couldn’t be separated going to the break on level terms, 1-4 to 0-7.

In what was to prove an absorbing second half, High School started the stronger and opened up a three points gap with a series of fine scores but the Abbey refused to lie down and responded with a point of their own. A swift counter attack by the Abbey split the High School defence wide open and the moved was expertly finished to the bottom corner just on the water break. It was just the tonic for the Tipperary men who now had a one point advantage with 15 minutes to play.

With the game on a knife edge, the High School pulled level before both sides exchanged the lead on different occasions in trading points on two occasions as the battle for supremacy entered the last 10 minutes.

The game flowed from end to end but with 6 minutes to go, it was High School substitute Senan Butler who unlocked the Tipp town rearguard to set up his older brother Emmet who stuck the ball in the top right corner giving the Abbey goalkeeper no chance.

The High School tagged on another point but Abbey refused to lie down and a further pointed free left a goal between the sides as the game entered injury-time as they bombarded the Clonmel defence, which managed to hold firm until referee Richard O’Connor’s final whistle with the scoreline at 2-10 to 1-10.

The High School will be happy to have gotten over the stiff challenge and now go on to face Thurles CBS in the county semi-final before facing Kerry kingpins St Brendan’s of Killarney in Clonmel in their opening Corn Uí Mhuirí tie on November 3.

For the Abbey CBS, they will be disappointed to be defeated but showed that they are in fine fettle heading into their Munster campaign as they face a trip to Cork to face Coachford College on the same date in what is a straight knockout game in the Corn Donnacha Uí Nuanáin.