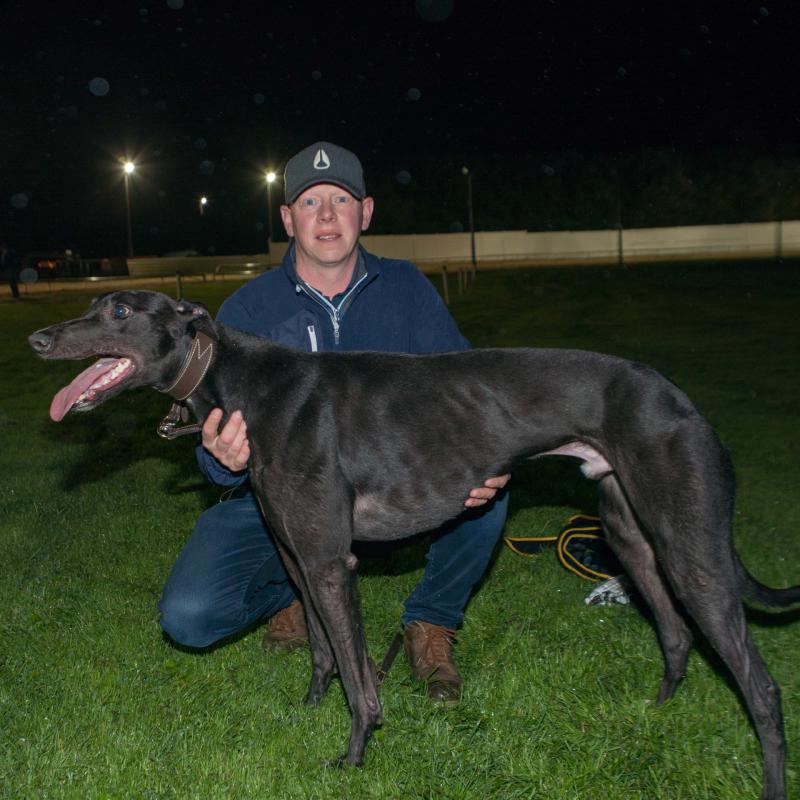 Kilfeacle-based trainer Thomas O’Donovan was a happy man leaving Cork on Saturday night as he guided two greyhounds into the final of the Friends & Supporters of Cork Greyhound Racing Irish Greyhound Laurels which will take place next Saturday night at Curraheen Park Greyhound Stadium. He will be joined in the final line-up by not one by four other Tipperary based trainers, all vying for the first place prize pot of €30,000.
One Time Only, trained by Thomas O’Donovan for owners Paul Horig and John Woodford, caused a 12-1 upset in the second semi-final.
There was no fluke about the winning run, quickest down the back straight, One Time Only kicked a length and a half clear to the third corner as Droopys Good came alongside Skywalker Barry in behind. Maintaining the strong gallop, One Time Only kept on powerfully to land the spoils, three and a half lengths clear of Skywalker Barry, who himself was a length and a half clear of Droopys Good, in 28.33.
The opening semi-final was a messy affair and Ballymac Wild went down as a very unlucky loser.
One of Ireland's quickest, he looked in total control heading into the opening corner, but it all changed when Romeo Magico charged up the inside, taking a small step to the right, he caused plenty of early trouble.
Sweep The Yard led soon after, but it was Liam Dowling’s Ballymac Fairone who took over before the third corner. In a great battle up the home straight, Fairone just got the verdict, holding the rallying Sweep The Yard, by a neck in 28.58. Thomas O’Donovan’s Epic Hero, last year's Leger winner, a length and a half back in third.
laurels final dray
(Final takes place on Saturday, October 23 at Curraheen Park Greyhound Stadium, Cork)
1 One Time Only (Thomas O’Donovan, Kilfeacle)
2 Droopys Gold (Owen McKenna New Inn)
3 Ballymac Fairone (Liam Dowling, Kerry)
4 Epic Hero (Thomas O’Donovan, Kilfeacle)
5 Skywalker Barry (Mark O’Donovan Tipperary Town)
6 Sweep The Yard (Graham Holland. Golden).