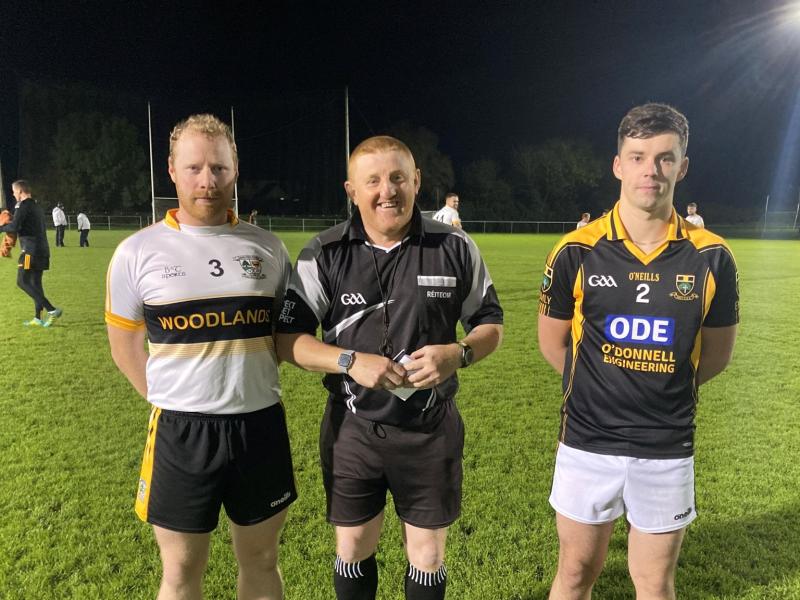 The referee calls the two captains together before the start of last Friday night's game at Cappawhite. From left to right: Michael Shanahan (Knockavilla Kickhams), Seanie Peters and Cian Quish (Emly)

Knockavilla Donaskeigh Kickhams are back in the AIB West Junior A Football Championship Final for the first time since 2017, after accounting for Emly in Cappawhite on Friday evening in the semi-final.
Played in dry crisp conditions it was ideal for football. While Kickhams pulled clear in the final ten minutes it didn’t always look as rosy for them. When Conor Phibbs goaled in the eighteenth minute Emly were five up and in control. Few would have imagined at that stage that Kickhams would outscore their opponents 2-10 to 0-3 for the remainder of the game.
The opening exchanges were fairly even though the pace of the Kickhams attackers was evident. Dean Thompson got Kickhams off the mark in the fourth minute but this was quickly cancelled out by a Jason Ryan effort at the other end.
Kickhams were enjoying the better of the possession stakes but their wides tally was building. Elliot Thompson made a huge run virtually unchallenged into the Emly danger area only for his goal bound shot to rebound off the post.
With scores hard to come by it seven minutes before the scoreboard clicked again, this time Conor Horgan from a placed ball. Michael O’Donnell quickly restored parity. Paul O’Heney and Shane Carroll were now getting on top in midfield and the latter drifting out and his pace was causing problems. Jason Ryan got in on goal only to see his shot go across the face of goal and wide.
The game’s first goal did arrive on the quarter mark when Conor Bourke finished to the net. Emly ahead at the water break 1-2 to 0-3.
It got better just after the water break, starting with a run from Paul O’Heney and finished to the net by Conor Phibbs. Emly ahead 2-2 to 0-3. Kickhams came more on top, Jamie Duncan named at fifteen but playing further out the field, Shane Morrissey getting on more ball as was Elliot Thompson around midfield.
Points from Elliot Thompson and Shane Morrissey reduced the gap. Four minutes to the break and a good move from Shane Morrissey saw him get a pass away, as he was falling, to the unmarked Jamie Duncan who had come in behind the defence. Duncan slotting the ball low past the goalie’s right hand side to tie the game. Duncan almost had a second when he intercepted a ball ahead of the Emly keeper but his effort went the wrong side of the post.
Dean Thompson who was lively and always a threat pointed again before the break. Kickhams ahead by the minimum 1-6 to 2-2.
Jason Ryan pointed for Emly in the sixth minute following the resumption their first score in around eighteen minutes of play. Emly had chances but struggled in front of the posts.
It was the 12th minute before Kickhams raised a flag in the half. Dean Thompson finished to the net for a vital score and a huge cushion for Kickhams. A Jason Ryan pointed free left the tie nicely poised at the water break with Kickhams leading 2-6 to 2-4.
Elliot Thompson got in for his second point but Aidan O’Heney kept Emly in touch. It was to be their last score of the game though. Emly weren’t helped by losing the influence Shane Carroll through injury for the last ten minutes or so.
Kickhams though finished stronger and always looked more of a threat while well able to control possession. Six unanswered points with their substitutes getting in on the act with Eddie Daly and Davy Butler both kicking two each in this period as Kickhams pushed clear.
Kickhams will now face Sean Treacy’s in a repeat of the 2017 decider.