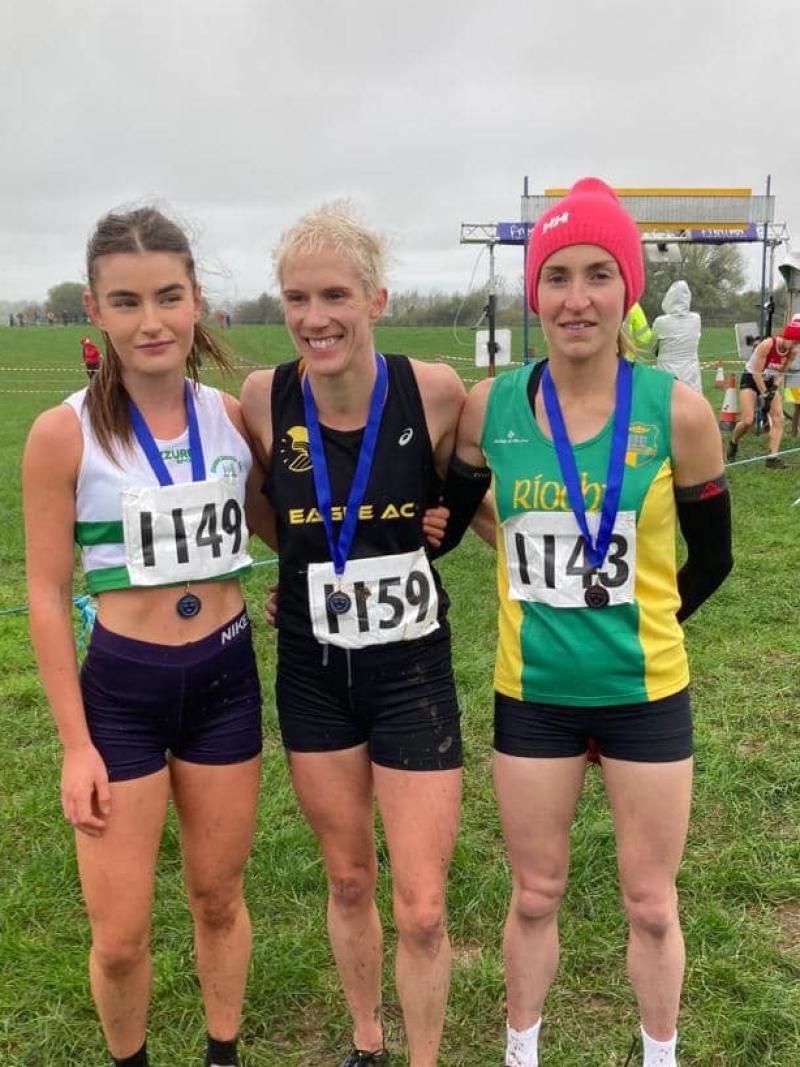 The Munster Senior ladies went to the start at 1.30pm on a wet and windy day at the Turnpike Two Mile Borris, Thurles. They had 3 laps of the 3k circuit to complete on fairly good ground considering the awful conditions.
Two Clonmel AC athletes made themselves known in the initial stages with both Ciara O’Neill and Caroline Goddard in the top 10 throughout the first lap in a very hot pace. Also prominent in the pack was Suzanne Shine holding onto the main pack of runners. Sareen Walsh, Jennifer Quinlan, Brid Hearne and Marina Quinlan meanwhile were working hard as a team together picking off runners one by one.
Into the 2nd lap and there was a clear breakaway with Olympian Aoife Cooke, Shona Heaslip and our own Ciara O’Neill batting it out for the individual medals and what a battle it turned out to be.
All three girls put in a fantastic exhibition of cross country running and heading into the final lap it looked like the medals had been decided with Aoife Cooke and Shona Heaslip getting a 10-yard gap on Ciara O’Neill. Cooke then made a strike for gold pulling away from Heaslip and that is the way it stayed until the final 500m. At this point it became clear that Ciara O’Neill was making a tremendous charge finding reserves of speed from somewhere she turned into the final 200m straight and literally cut through Shona Heaslip’s 30m gap, pipping her on the line for the silver medal. It was an amazing fighting effort from this young Clonmel Athlete and a performance that will give her great confidence for future championships.
Ciara created a piece of Club history when winning the Club’s first Munster Senior women’s Cross Country Individual Silver medal.
Our second lady home was Caroline Goddard in 18th making her debut for the club at senior level and has really hit the ground running (excuse the pun). We look forward to more from Caroline. Both Ciara and Caroline were scorers on the Tipperary team that won silver medals. We next had Suzanne Shine in the heart of the team who battled all day and picked off some terrific club athletes when finishing 22nd. Our fourth lady home was Sareen Walsh had a key role to play for the team picking off athletes to help her team win the Munster Senior Bronze medals when finishing 29th.
Fitting that Sareen gets her medal as she put a lot of work into the club’s cross-country program for both the juveniles and the Senior.
Well, done also to Jennifer Quinlan finishing really strong, to Brid Hearne and Marina Quinlan all in their first season running for the club and first time competing at this level brilliant performances all round.

Three founding members of a Tipperary athletic club are honoured