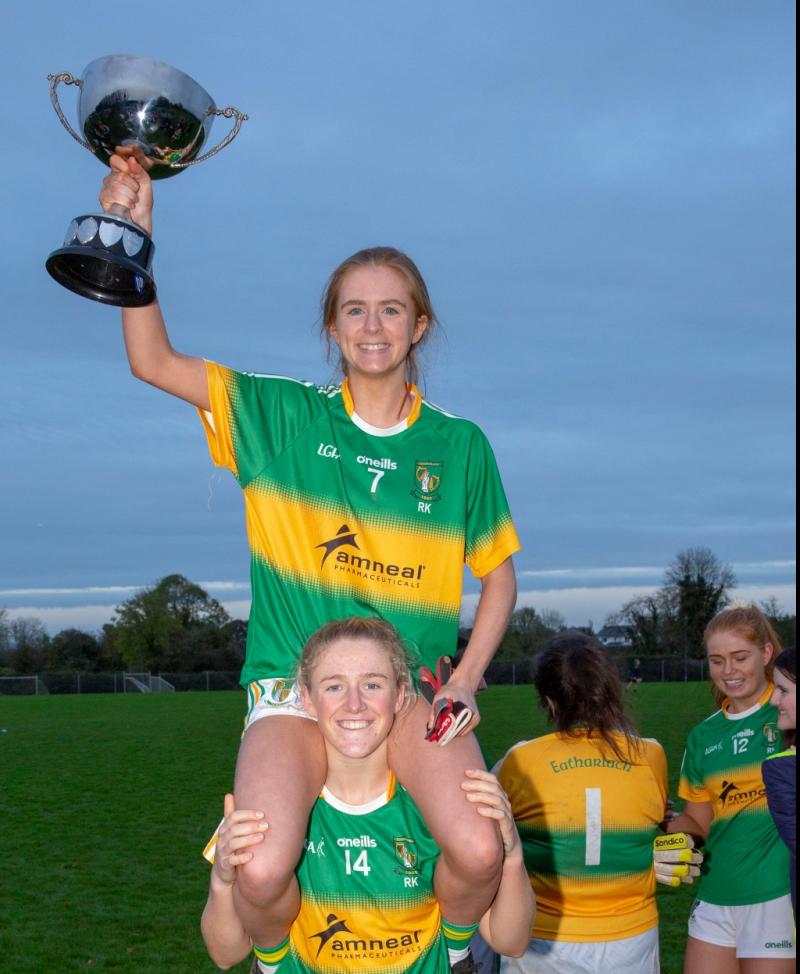 Aherlow's Kate O'Meara on the shoulders of Emma Morrissey holds aloft the Joe McGrath Cup after their side defeated Brian Borus in the Camida County Senior A final at Lattin. Pics: Cahir Media

Aherlow are back at the summit of Tipperary ladies football following their win over Brian Borus in the county showpiece at Lattin on Sunday afternoon, even if the manner of that victory came somewhat fortuitously to them in the end.

With the clock two minutes into the red they trailed by a point and needed Emma Morrissey’s 30m free to go over to force extra-time. However, that attempt at an equalizer fell short and somehow crept under the crossbar and into the net for what ultimately proved the match-winner. A minute later John Murphy’s final whistle meant a crestfallen Brian Borus would have no chance to recover from the heartbreak of conceding that softish goal.

In what was a tense, low-scoring final all through, the sides were level on six occasions over the hour, with no team able to get any real stranglehold at any stage of the game. Extra-time looked highly likely throughout the second half, but Brian Borus may have thought the cup was heading for Clogheen for the first time since 2016 when the superb Mairead Morrissey pointed them ahead a minute from the end of normal time.

And then after the attacking Anna Rose Kennedy had been fouled Emma Morrissey stepped up to take the game-defining free from 30 metres out, having missed a similar attempt just two minutes earlier. Lacking the required legs to carry it over the crossbar, the ball fell above the outstretched arms of a goalline defender and into the goal. It was agony and ecstasy mixed in one kick of a ball and the Joe McGrath Cup decided upon it.

The early stages of the game were even with both sides trying to gain the initiative. After 10 minutes it was 0-2 apiece, Sara Morrissey opening the scoring after 30 seconds for Aherlow and Cliona O’Dwyer also scoring a first quarter point from play for Borus; the other two scores in that opening period, a free each to Cliona O’Dwyer and Emma Morrissey of Aherlow.

The game’s first goal arrived on 13 minutes with Mairead Morrissey and Jennifer Grant combining to set up Helen Burke who gave Emer McCarthy no chance with her thunderbolt shot.

Aherlow replied with a hard-earned point three minutes later by wing-back Kate O’Meara and the sides went to the first half water break with Borus leading 1-2 to 0-3.

Within two minutes of the resumption the sides were level for the third time following a pair of frees by Emma Morrissey, both won by her own probing of the Borus defence.

Shannon Morrissey edged Clogheen ahead again pointing after a slow build-up but once more another Emma Morrissey free restored parity for the fourth time in the 29th minute of the first half.

Brian Borus had the better finish of the opening period with Shannon Morrissey again scoring after a great move that linked Jennifer Grant, Cliona O’Dwyer and Mairead Morrissey before Shannon pointed. And when Cliona O’Dwyer put over a free two minutes into time added-on Borus were going in at half-time two points ahead, 1-5 to 0-6, and fully deserving of it. 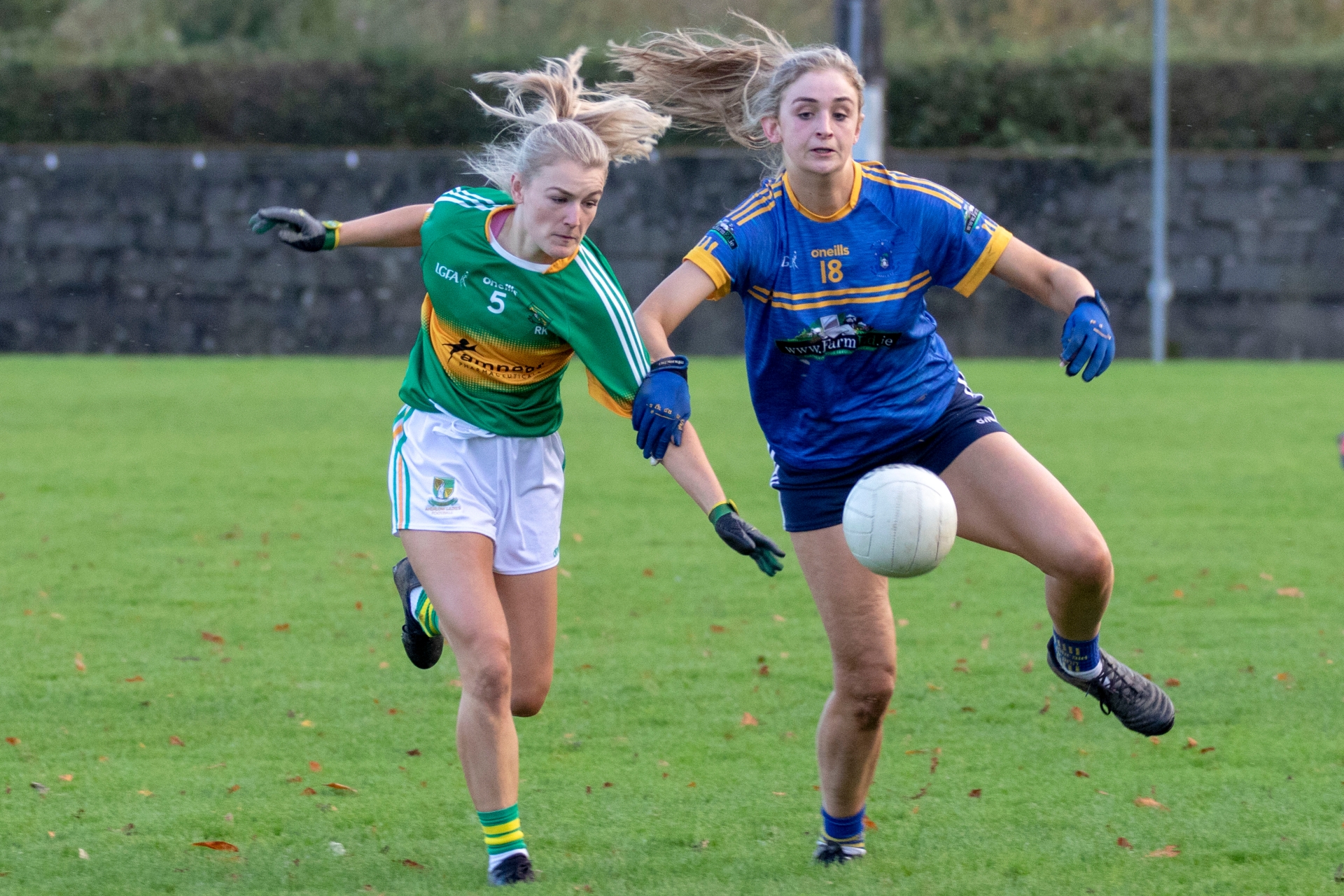 The second half opened in blazing fashion with a goal apiece within three minutes.

In the opening minute a fine move that combined Marie Condon and Aisling Ryan put Emma Morrissey clear and she finished clinically to edge Aherlow a point ahead. However that advantage was wiped clean almost immediately with the move of the game.

Maureen Murphy twice linked up with Mairead Morrissey and then Jennifer Grant to free up Cliona Morrissey who rattled the Aherlow net to swing the pendulum Borus way once more.

It was a slow scoring third quarter thereafter though, the only other scores going the way of Aherlow, a Siobhan Condon point from play and an Emma Morrissey free to leave the sides all square at the second half water break, Aherlow 1-8 Brian Borus 2-5.

After Borus midfielder Eimear Myles was fouled Cliona O’Dwyer put her side ahead again with 10 minutes to go, but within two minutes Emma Morrissey had it level for the sixth time with a fine point from play. It was all to play for now down the stretch with all 30 players giving every ounce of energy in pursuit of the county title.

Eight minutes passed before the next real chance arose when Emma Morrissey had a 30m free for Aherlow but her effort drifted left and wide. From the kick-out Borus broke upfield and hero-like Mairead Morrissey, who had been outstanding all day, took on the Aherlow defence and sent over a rousing point for the lead.

Still Aherlow wouldn’t give up and when Anna Rose Kennedy was fouled Emma Morrissey stood up to try and do what she had failed to do two minutes earlier. This time she got more than the point she was hoping for and Aherlow were county senior champions once again. 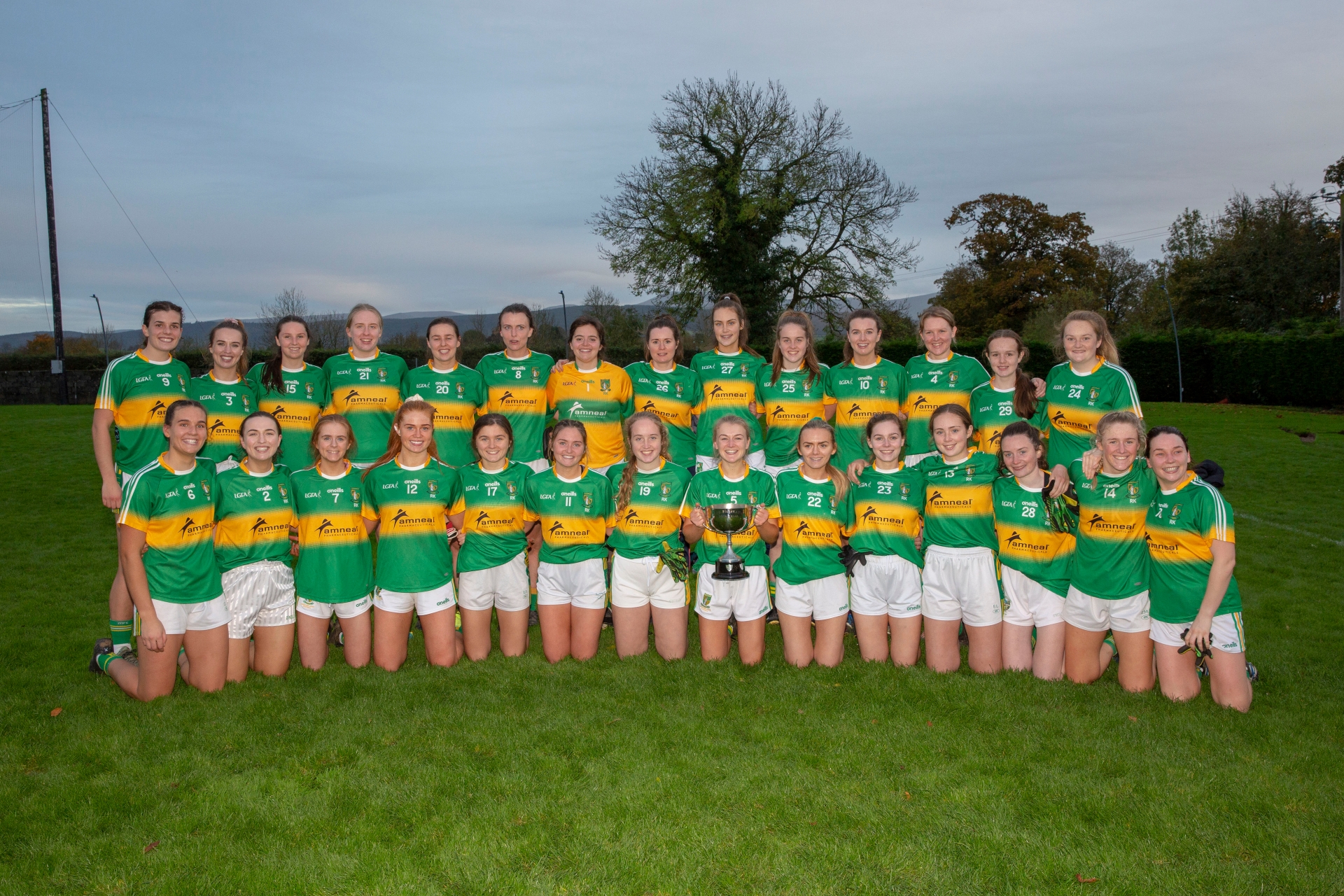