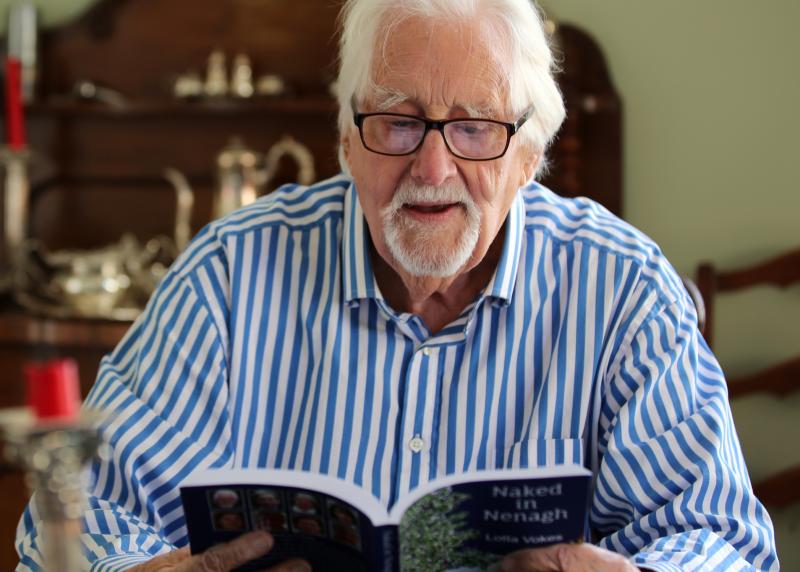 Author Alan Grainger, who, with the help of 15 other writers, has written a murder mystery called Naked in Nenagh, which is now on sale

There are many things that happen in the town of Nenagh but being naked and dead is probably not one of them.

However, a new book by a group of authors based in Dublin and led by crime writer Alan Grainger have put together a plot that could have come straight from the pen of Raymond Chandler or Agatha Christie.

Naked in Nenagh is the second murder mystery from a 16-strong group of south Dublin neighbours led by 93-year-old Alan.

Alan, who previously published more than a dozen detective novels, came up with the idea of a first novel in January 2021 as a way to beat boredom during lockdown.

He wrote the first chapter before passing the baton to each of his neighbours. The novel, The Secrets of Beacon Court, was published in March and was so successful that Alan embarked upon a second.

Work on Naked In Nenagh began just two weeks later. More neighbours got involved and members of a book club asked to join, increasing the number of writers from 10 to 16. Each author wrote a 1,500 word chapter which was edited by Alan before being passed along to the next participant.

Alan says €1 from each book, after costs have been covered, will be going to The Simon Community.

“We never anticipated that our first novel would sell many copies. We started it as a way of filling time and providing entertainment for ourselves. It was so much fun that I had to ask my neighbours, friends and family to join me for a second. The first book came together in just eight weeks. This one took longer because people were going back to work so we gave everyone additional time to complete their chapter. It was important for us to maintain the community spirit that emerged during the pandemic,” he said.

Naked In Nenagh, centres around two incidents in Tipperary. A newspaper delivery boy spots an elderly unclothed woman sitting slumped on a garden seat; she appears to be dead. A day later, a man is found battered to death at a stud farm 20 miles away. Are the two deaths linked?

“There is hardly a serious crime that isn’t introduced somewhere in the book. There’s skulduggery of many kinds, murder, robbery, drug smuggling, horse doping and murder. We also have the added element of a thriving colony of nudists which I hope will give people a good laugh,” he said.

Alan, who was born in Darlington in England, revealed that he loves Nenagh and that was why he chose it as the location.

“Although I married a girl from Nenagh who I met at Dublin Airport many years ago, most of the geography and characters for Naked In Nenagh are made up, we are not trying to vilify anyone, we just want to entertain.”

He wanted to emphasise that the book was a work of fiction and he only wrote the first chapter with the rest being done by the other 15 people, just in case anyone thought it was based on any incident in this locality.

Naked in Nenagh is available through www.oldconnaughthouse.ie or directly from Amazon and Kindle.

Alan, who has been living in Dublin since 1954, has now recruited his neighbours and friends to take part in a third book, a collection of short stories from each person’s childhood. That one will have 19 contributors who have written 27 stories.