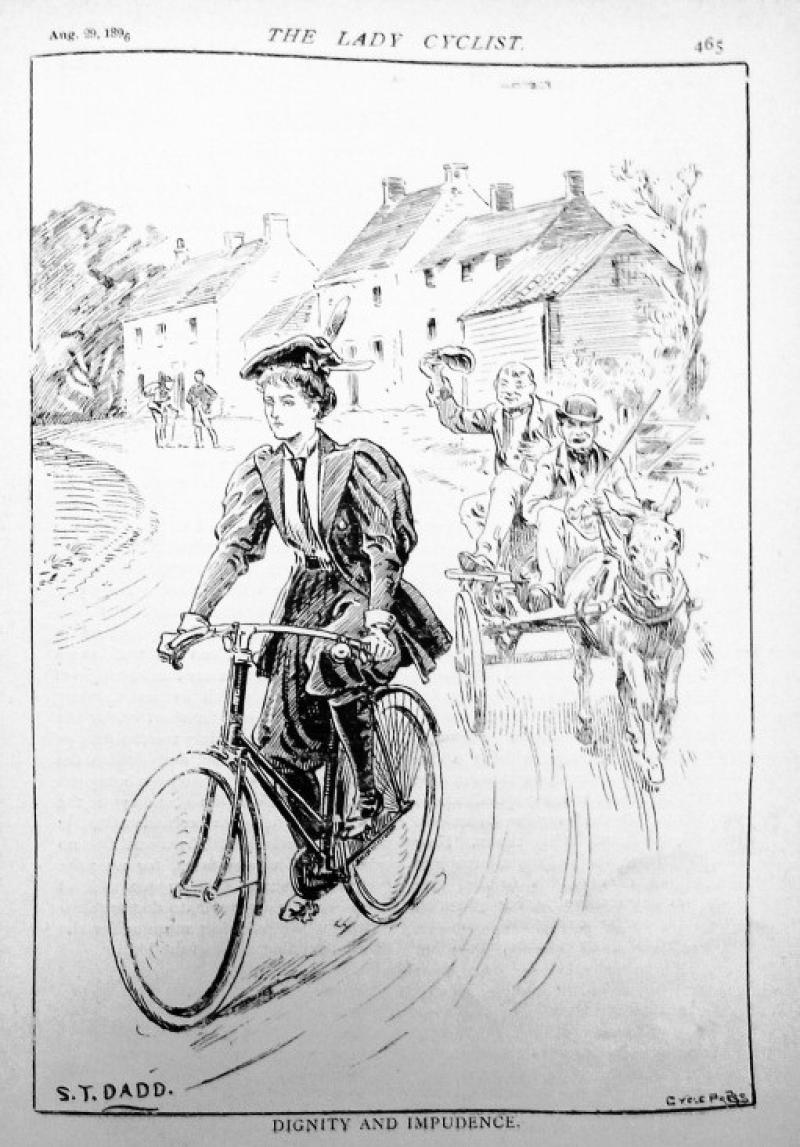 A ‘dignified’ woman wearing bloomers riding a safety bicycle in the face of ‘impudence’, The Lady Cyclist, 1896

Let me hastily add before I get a belt of a bicycle pump from some irate woman cyclist that the words in the title of this article are not mine! They were written in the 1890s by a John Petersen and reflected the widespread prejudice of the time against women cyclists.

This prejudice - largely found among men, it must be said - was fuelled by the belief that the female cyclist was not acting and dressing as a proper Victorian lady should - demure, home orientated, and deferential to fathers, brothers or husbands on important matters - who of course always knew best!

The 1890s have been described as the golden age a cycling. It became a great leisure activity during that decade, particularly for young middleclass men. Some of their female counterparts also grasped the opportunity for greater freedom and mobility the bicycle presented. The American feminist Susan B Anthony claimed in 1896 that “the bicycle has done more for the emancipation of women than anything else in the world”.

Before the mid-1880s only daring and independent-minded women cycled. The standard bicycle of the time – known as the “Ordinary” or “Penny-farthing” - was high, dangerous and unstable, with the ever-present danger of a serious toss. The female cyclist was also likely to meet with lewd jeers and barbed insults, never mind the constant hazards of steep hills, rutted roads and straying animals. Some brave women who did take to the roads usually did so on tricycles. But these were heavy and cumbersome machines with their solid tyres and difficult to pedal and manoeuvre.

Two developments revolutionised cycling, particularly cycling for women. In 1885 John K Starley of Coventry invented his Rover “safety” bicycle. This machine had two equal-sized wheels, the front one steerable, and a drive chain on the back one. It was essentially the same as our modern bicycle and infinitely safer than the old “penny-farthing” model. Starley failed to patent his new design and several other manufacturers were soon copying it. By the early 1890s the intending cyclist in Nenagh could choose from a selection of brands on offer from several cycle agents in the town.

The second game-changing invention was John Boyd Dunlop’s pneumatic tyre in 1888. This quickly replaced the solid rubber tyre - especially on more expensive models - and made bicycle riding both safer and less bone-shaking. The new “safety” bicycle with pneumatic tyres was especially suited to women, even if opinion was still sharply divided on whether they should be cycling at all.

The Nenagh Guardian noted in 1894 that none of the Nenagh cycle agents “appears to be making any effort to induce the fair sex to take to cycling, a practice which is becoming very common on the other side of the Channel”. This would suggest that there were few women cyclists in Nenagh and District at that time. This is perhaps surprising considering that there had been a Ladies’ Cycling Club in Nenagh six years previously. The club is reputed to have been the first all-female cycling club in Ireland and was perhaps among the earliest in the entire United Kingdom.

We only know of the Nenagh club’s existence from two letters that appeared in the Nenagh Guardian in May 1888. These letters - written by a club member - describe in detail two runs or outings the club undertook that month. The letters make clear that the ladies were riding tricycles, not the new “safety” bicycles.

The letters are interesting because they capture the great sense of fun and camaraderie, together with the new-found freedom and physical exhilaration, these young women experienced in cycling. The writer also made a telling remark: “There is a general belief that ladies can never thoroughly enjoy themselves when together without the society of the sterner sex. But anyone listening to the peals of laughter and the witticisms of our party would change their minds at once and forever. It may not be ‘good for man to be alone’, but the same thing does not hold good for his sisters, his cousins, and his aunts.”

The first run was from Nenagh to Dromineer and back for a picnic on the shore. The second was to Johnstown, probably to Poulavie, the small lake lying behind Killodiernan Church of Ireland church, a short distance below the village of Puckaun.

The convoy of women cyclists created a mini-sensation passing through the village. But they never actually reached their destination because they met the local parish priest, Fr Patrick Flannery, below the village and he kindly invited them to his house for tea.

The journey back to Nenagh was, said the letter writer, punctuated with “jokes and laughter”, not least when one of the ladies lost control of her machine and careered down a steep hill, frantically ringing her bell to scatter some wandering donkeys from her path.

A man hiding under the non-de-plume “Max O’Dell”, sent a letter to the Guardian ridiculing the girls’ descriptions of their outings. “It would’, he mocked, ‘forcibly remind one of a crack cavalry corps bent on foraging or skirmishing duty’. He even slyly suggested that the loud laughter at the Dromineer picnic had been caused by “French colouring” (wine) in the tea.

A stout rejoinder came swiftly, perhaps from an unexpected quarter. Fr John Gleeson, CC Templederry, wrote to the Guardian severely chiding the anonymous writer for his “vulgar and ungentlemanly” letter. The writer, he pointed out, must have been motivated by that “ugly vice called envy”. The priest was particularly annoyed at the slur of semi-intoxication the writer had cast on the respectable young women of Nenagh. But, unfortunately, we hear no more of the Nenagh Ladies’ Cycling Club. One wonders if they had been driven into silence by the male ridicule heaped on them.

The woman cyclist who abandoned her long dress and restrictive corset for more “rational” clothing - knickerbocker trousers, topped off with a short jacket - was considered by some at best “masculine” in appearance or at worst “a brazen hussy” of doubtful morals.

The well-known local versifier, the Nenagh RIC Sgt Jack Kiely, reflected the prevailing chauvinistic attitudes of the period in a poem published in the Nenagh News of 14th September 1895. The poem, titled Our Lady Cyclist, mocks “Mary”, the “new woman” with her modern notions of independence and equality, her “rational” dress and her scorching about on a bicycle.

The final three verses give a flavour:

Of course she wears the ‘Rational’
And Knickerbocker clothes,
Her pretty ankles to display,
Her calves and little toes!
For ‘winning points’ she has no wish
To cover or to screen,
And she can smoke a cigarette
Upon her new machine!

‘New woman’ mustn’t be controlled
As we controlled the old,
For Independence, Mary says,
Is life’s bewitching gold;
On parents’ or on husband’s help,
What need has she to lean,
Who now asserts equality
Upon her new machine?

Now Mary’s mother used a wheel,
But t’was for spinning flax,
And when we tell her daughter this,
Oh, Lor! How fierce she’ll wax;
It’s from the present not the past
Her knowledge she will glean,
And soon she’ll enter Parliament
Upon her new machine!

But ‘Mary’ was having none of it and two weeks later a clever and sarcastic poetic reply appeared in the same newspaper. Sergeant Kiely was basically told he would be better employed minding his own business:

If Mary is a dressy lass,
What’s it to you J.K.?
I’m sure she has not on a stitch
For which she does not pay.

The poem goes on to chastise Kiely for acting like the Censor of ancient Rome and the Pharisee who condemns things as scandalous just because they are new. It ends with the jibe that Sergeant Kiely might be better employed attending to his police duties rather than discussing women’s clothes.

Of course J.K. is ‘rational’
In everything he does,
But surely he could draw the line
At touching women’s clothes,
And as he is officious,
He might keep the highway clean
Of such things of pigs and donkeys,
When she’s out on her machine.

We have plenty of information on male cycling locally largely due to the saturation press coverage given to the activities of the Nenagh Ormond Cycling Club. This all-male preserve - founded in February 1894 - was no way shy of trumpeting the many runs and races it organised for its members. Women went on cycling quietly and eschewed the hullabaloo created by their male counterparts.

But the number of women cyclists grew steadily and the Guardian noted in 1901 that the bicycle was now popular in country districts with “ladies, clergy and the police”.

A major change was also coming about in the attitude to the bicycle. Previously it had been seen as an instrument of leisure for the comfortable middle class; but it was now becoming just another mode of transport to get one from A to B.

Danny Grace is an author and local historian. This article is taken from his latest book, Glimpses Of The Past, People, Places and Events in North Tipperary, which is available in bookshops, price €15.