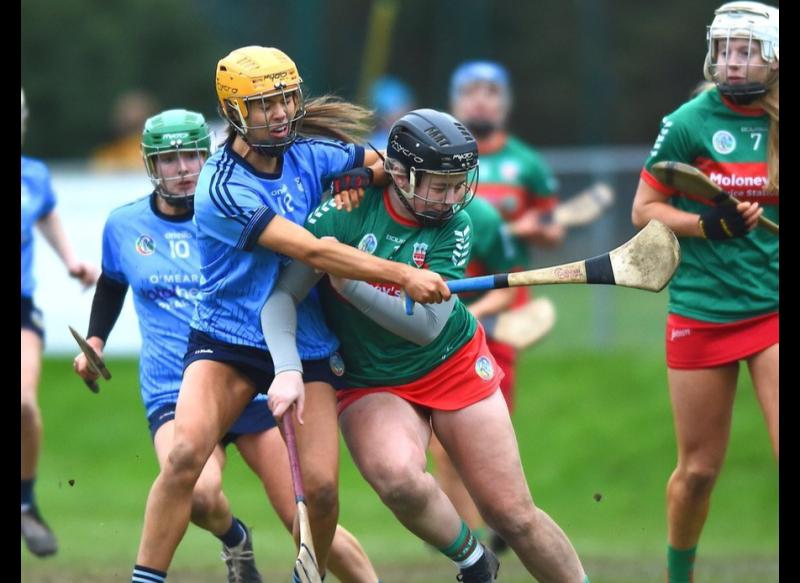 There was heartbreak for Drom & Inch in Mallow earlier this afternoon as they lost by a single point after Mairead Scanlon goaled five minutes into added time as they held a 1-8 to 0-9 lead.

A long, looping ball caused a big fight for the ball amongst a pile of bodies, but unfortunately from a Drom point of view, it broke out the Scanlon on the outside where she gathered the ball and lashed it to the net to give the Clare champions a late lead.

Time was quickly running out, but Drom fashioned a late chance after Niamh Treacy broke free from midfield in what was the last play and she found a hand pass to Miriam Campion who was checked by a high tackle and gave Drom a very scorable free to equalise.

However, the usually ultra reliable Eimear McGrath pulled her effort to the left of the post from more or less straight in from of the posts from inside the '45 which led to Diarmuid Kirwan blowing the final whistle, which signaled devastation for the Tipperary champions.

This was not a game for the faint hearted and despite its low scoring nature, it was a breathless encounter with the teams putting in a gargantuan effort over the course of the game, and it started in that fashion with McGrath pointing a free within three minutes.

The Clare combo got into an early groove though and had a 0-3 to 0-1 lead after ten minutes with their free taker Aisling Corbett pointing three frees in a row, but Drom finished the quarter well with a Maureen Ryan point from play and another McGrath free levelling the tie at the first water break.

The second quarter left a lot to be desired from a quality viewpoint, but the defensive effort of both teams was outstanding, and from Drom's perspective, they were well aided by Caoimhe Bourke in goal who made two top quality saves in either quarter; both shots coming from Alva Rodgers who was operating at corner forward, as the Tipperary goalie showed her class.

It was 0-4 all at half time and the second half promised much more in terms of scoring fare, but the game didn't materialise in this way, as the dogfight continued, with numerous stoppages breaking any fluid passages of play.

However, you got the sense that Scarriff were making their as they opened a two-point lead by the 44th minute, with Mairead Scanlon pointing a nice close range effort, which was added to by another Corbett free from distance.

Drom were living off scraps and were been given no quarter in the forward line, but a McGrath '45 just before the end of the third quarter kept the distance to a minimum as the Clare outfit led 0-6 to 0-5 with 15 minutes to go.

It was frantic in the final quarter as both teams were fighting tooth and nail for every single ball, but Scarriff were having the better of it, winning more of the battles around the field and extended their lead to three points, with Alva Rodgers and Corbett (free) both finding the target with just eight or nine minutes left to go.

In the context of this game, that was a big lead and represented the biggest gap between the teams in the whole contest, but a seemingly huge moment came for Drom a minute later, when a mis-hit Eimear McGrath free was deflected high into the air around the Scarriff square, and waiting for it to drop was Miriam Campion who showed pure class to bat the ball over her head into the bottom corner and send the Drom sideline into raptures.

It seemed like the winning moment, and when Joanne Ryan kept her composure close to goal a minute later, pointing off her right on the second attempt, it looked as though Drom were going to steal the win at the death.

The drama wasn't over though. Eimear Cahill gave away a needless free with just two minutes left, which was delivered in around the Drom goalmouth, and in a frantic scramble for possession, Mairead Scanlon kept her cool to lash home the goal.

Drom have been around the block in these big games in the last few years, and somehow eeked out another chance with powerful runs from Niamh Treacy and Miriam Campion carving the chance for Eimear McGrath to level, but she couldn't find the target as Drom lost out in the most cruel way possible.