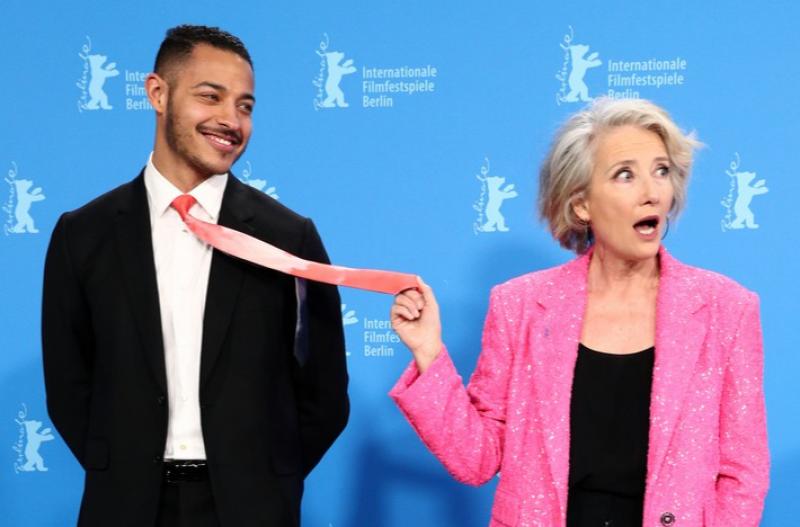 Tipperary actor Daryl McCormack shared the red carpet with A-lister Emma Thompson at the Berlin Film Festival at the weekend.

The young Nenagh actor, who has already starred in Fair City, as well as having a major roe in the hugely successful Peaky Blinders, was at the festival for the movie Good Luck to You, Leo Grande, which stars Ms Thompson.

Directed by Sophie Hyde, Good Luck to You, Leo Grande follows Emma, 62, playing a teach who hires a male escort (Daryl) in hopes to experience an orgasm for the first time.

The two shared a lighthearted moment on the red carpet when Ms Thompson pulled 29-year-old Daryl along by his tie.

In a recent online interview with Variety, Daryl, a former pupil at Gaelscoil Urmhumhan, agreed with presenter Marc Malkin that he was "fairly new to the game".

Mr Malkin asked him that when reading the script was he saying in his head: "Give me a few years."

"Absolutely," replied Daryl. "Obviously I knew entering this project our vast difference of experience. Just because I deeply cared about the story and what Katy Brand I could feel a passion from everyone in the project so someone who is starting off relatively knew in his career, I just felt like a lot of pressure to hold the film with Emma. The intensity of it all actually helped me manage my own authority within the film and we literally stepped through the film bit by bit holding each other hand. I think that is something so amazing about Emma. She has this incredible stature with everything that she done but yet I could feel her warmth and relatability. We were able to speak to each other as actors and as people."

Daryl's mother, Theresa, posted to Facebook: "Life beyond your wildest dreams. What an inspiration you are to anyone who has a dream that doesn't fit the norm."