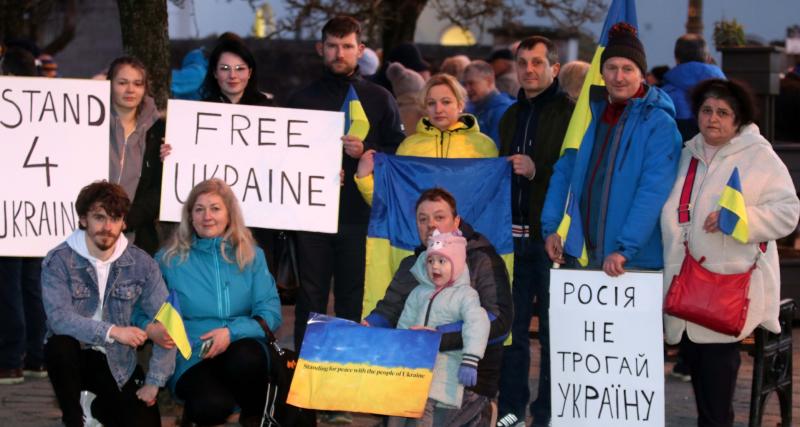 Over 100 people gathered on a cold and chilly evening last Friday on Nenagh's Banba Square to show their solidarity with the people of Ukraine following Russia’s invasion of the independent and sovereign state.

Many donned the Tipperary colours, which match those of the Ukrainian flag, while others carried flags and posters decrying the war and Russian president Vladimir Putin.

Fifteen-year-old Nenagh CBS student Daniel Zamotsnyy told the gathering that his grandparents were still in Ukraine near Kyiv and that he and his mother phone them every morning to see how they are getting on.

“I have a lot of memories of visiting Ukraine,” he said.

Daniel said the support from Ireland for his country had been “immeasurable” and he expressed his gratitude for that.

“The support from Ireland brings a tear to my eye,” said an emotional Daniel. “I hope Putin gets what he deserves and that the people of Russia keep protesting.”

Another Ukrainian living in Nenagh, Oleksandr Buydenko, said that Ukrainians appreciated the support for the “bad days we have had”.

“No words can tell what is happening in Ukraine but our government is strong, our people are strong. They will survive this bad moment,” he said.

Mr Buydenko thanked he people of Ireland for supporting Ukrainian refugees coming into the country.

Rally organiser and local Labour Party TD Alan Kelly, in his first public appearance since stepping down as leader of the party, pointed out that Daniel was “as Irish as I am”, and pointed to their Irish accents as an indication of how Ukrainians were living among us.

Earlier, Deputy Kelly, who organised the rally with the aid of a local group, said the gathering was to show solidarity with the people of Ukraine in the face of the “horrendous and disgusting behaviour of Vladamir Putin”.

Deputy Kelly highlighted that over the past 14 years, some €118bn had passed through the International Financial Services Centre in Dublin and that now needed to be stopped.

“We must make sure our country is not washing dirty oligarchy money that has been taken from the Russian people,” he said.

He emphasised that the rally was not about the Russian people, but about Vladimir Putin.

“It is important to acknowledge that there are many Russian people who are against this war,” he said.

The Labour TD said that in the coming days and weeks, Irish people will be asked to open their homes to those fleeing the war and that anyone who wished to get involved can contact him to see what they can do.

“Nenagh will not be found wanting and we will take them in,” he declared.

As the rally was starting, Deputy Kelly revealed that a truck full of supplies had left Loreto House in Kenyon Street bound for the Polish border.

There is a collection facility available at Tyone for those who would like to make donations of non-perishable goods.

The group organised a bucket collection at the rally on behalf of the Irish Red Cross and later revealed that €2,677 had been raised. They thanked all those who supported the collection.