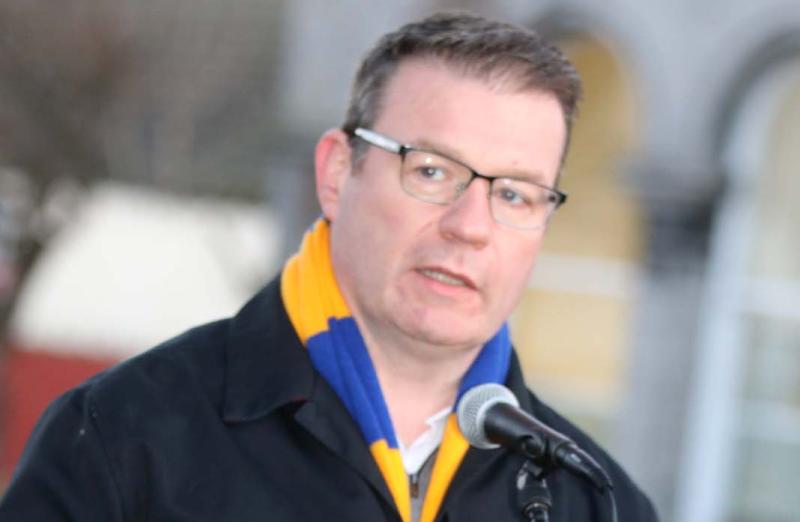 Deputy Alan Kelly: 'The bread and butter of my life will always be Tipperary'

Tipperary TD Alan Kelly, who last week stepped down as leader of his party, has said that despite losing the top job, there were “upsides to this”.

The Portroe man said that he will now have more family time - including the opportunity to take his young daughter, an avid Manchester Utd fan, to Old Trafford later in the year.

“Although,” he added with a laugh, “things are quite depressing there.”

It will also give him more time to focus on his native Tipperary.

“All politics is local. The bread and butter of my life will always be Tipperary,” said Deputy Kelly.

He said that since he had resigned, he had got through an amount of local work and he wanted to continue to do that.

As well as being party leader for the past two years, he said that he had been a public representative as well.

So will he go quietly on to the backbenches?

"I don't think I've ever done anything quietly," he said. "I will work with whoever is there. I will do whatever I am asked to do, but Tipperary will be my priority."

In relation to being leader, Deputy Kelly said that he had led the party at a difficult time, but despite this they had won a by-election in Dublin Bay South, and he had left the party with more seats that they had when he took over. Ironically, the person who won that seat, Ivana Bacik, is now tipped to be the next party leader.

“Ivana will be a brilliant leader and I wish her well,” he said.

He was also proud of the way the party had conducted itself in the Dáil during his tenure.

He said he had received “thousands of messages of support” since his resignation from friends and the general public, and he went on to acknowledge the friendships he had made with politicians from other political backgrounds.

He said he had three immediate priorities that he wanted to focus on, health being the major one.

“Health is a mess in the Mid West,” he declared.

And while he welcomed the expansion of care in Nenagh, he was “totally opposed to a private hospital being built in Limerick”.

Deputy Kelly called for an elective surgery hospital in Nenagh, or, at the very least, an elective wing at the local hospital.

“There must also be better pathways to Nenagh, Ennis and St John’s in Limerick,” he said.

Another health issue he highlighted was the “huge crisis in home help”.

His passion for health manifests itself especially when talking about women’s health and how Vicki Phelan changed his life in every way.

“I'll always do work in health,” he said. “I don’t like the way the health system works.”

Another priority is spatial planning and looking at where the country is going to put investment and housing.

“Covid-19 changed everything. Families are moving to Tipperary because their priorities changed and we need to plan for that,” he said.

To do that we needed more houses and more infill in towns.

“I see lots of empty houses and we need to fill them in to make our towns and villages vibrant,” he said.

In 2011, when Irish Water published its proposals to take water from the Shannon and pump it to Dublin, Deputy Kelly was part of that Government.

However, he said that project now needed to be looked at because other things had changed.

“Dublin is a nightmare for traffic. That is why we need to look at where investment and housing is going,” he said.

“I think I have a good track record on jobs and I want to continue that,” he said. “You need to try things. It took me four visits to New York to being Fiserv to Nenagh.”

“Tourism has a huge potential for Tipperary,” he said. “I want to promote tourism and bring more of that business in.”

Labour’s local council numbers dropped when Tipperary County Council was established in 2014 to one councillor, Cllr Fiona Bonfield, who retained her seat in 2019, and Deputy Kelly is looking to increase that in 2024.

“There are a number of candidates we are talking to. I want us to grow and increase that number,” he said.