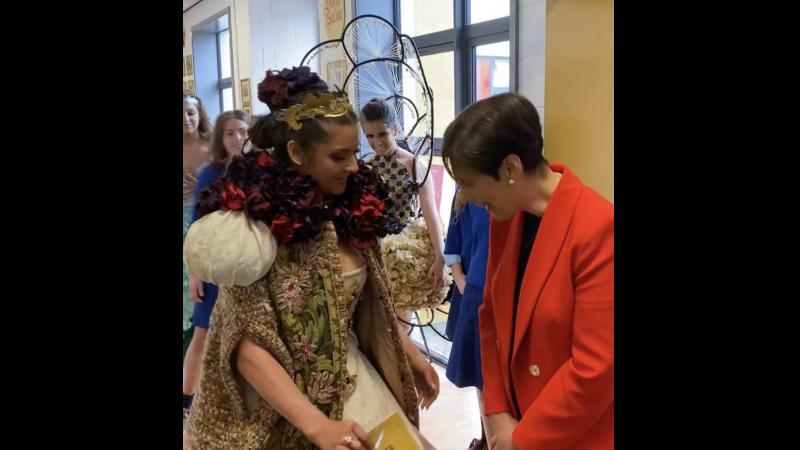 On Friday, May 6, Minister for Education Norma Foley paid a visit to Ursuline Secondary School to survey the proposed site of the new extension announced earlier in the year. She was accompanied by Jackie Cahill TD and Michael Lowry TD.

She was greeted by Principal Ms Mary Butler, members of the Board of Management, members of the School Council, Deputy Principals Tríona Gleeson and Dan Kirby, the Principal of Scoil Angela Brídann Molony and Sisters from the Ursuline Community.

Two very special guests from First Year, Clodagh and Lauren O’Dwyer from the same part of Kerry as the Minister, were on hand to present her with a bouquet of flowers when she arrived. She was shown a flavour of the extra-curricular activities on offer in the School, including an upbeat, jazzy rendition of I’ve Got Rhythm sung by Chamber Choir, one of their Cork Choral Festival winning pieces.

She was introduced to Junk Kouture Grand Finalist Genevieve Keane, TY, who had stormed the stage at the 3Arena the previous night with her design Acantha to be picked to represent Ireland at Junk Kouture World Final to be held in Abu Dhabi in June.

Minister Foley also met the other Junk Kouture 2022 National Finalist Green with Envy and the team who designed this dress, Hannah and Katie O’Mahoney and model Mary Ryan.

The Southern Regional Winner of the competition in 2020, Givin it Welly, was also modelled for the Minister, and she met the students who created this winning entry made from milk filter socks and old Wellington boots, Laura Hally, Emma Ryan and Cathy Hogan.

She met with the Irish Certified Angus Beef Schools Competition finalists, who won five calves at this year’s National Ploughing Championship and who will rear them for the next two years with the hope of winning the overall prize. Louise Creagh, Gráinne O’Donnell, Louise Hickey and Karen Campion spoke passionately about the competition and their interest in Ag Science, and the Minister was delighted to hear that it was offered as a Leaving Cert subject in the School.

She was also introduced to this Ursuline team of Rebekah Smith, Evie Smyth, Kaitlyn Ryan and Gráinne Callanan, who reached the National Final in Croke Park held at the beginning of April and who have also been told that they are among the top six schools in the country that will be receiving their Angus calves in September. This is the first time in the history of the competition that the same School has won the top prize two years in a row.

The Gael Linn Debating team of Mairéad O’Brien, Ava Collins, Róisín Duffy, and Jane Hennerby, who placed second in this year’s All Ireland Final, exchanged a few words ás Gaeilge with the Minister. She spoke with the Chairperson of the Amber Flag Committee, Caoimhe Howley, who told the Minister they just got word of their fourth Amber Flag for promoting positive mental health in the School.

She spoke to Natalie Gillman of the Green Schools Committee, who explained the many initiatives undertaken by the group to raise awareness of environmental issues among the wider school community, and she informed the Minister that they too were delighted to be awarded a ninth Green Flag recently after an assessment by An Taisce.

She spoke with the Chairperson of the School Council, Michelle Flanagan, who explained the role of the School Council in being a voice for the student body, teasing out issues at Council meetings and that they see it as part of their agenda to support well-being and foster harmony with in the School. Co-captains of the All Ireland Junior A Camogie team, Sarah Corcoran and Dervla Naughton, showed the Minister the Corn Naomh Gobnait Cup and spoke about their pride in bringing it back to the School for the first time.

She also met with some of the International students from Italy, Spain and Germany and asked them about their experience in Secondary School in Ireland.

Finally, she was treated to a musical recital by Anna Grace on piano, accompanied by two violinists from Senior Orchestra. Minister Foley was thankful for the warm welcome she received from the students and said she was impressed by the richness of the tradition and the excellence of educational achievement on offer in the School.

She told the girls that they are enriched and emboldened by all they receive in the School and that she, as Minister for Education, was very proud of all that is achieved in the School every day.