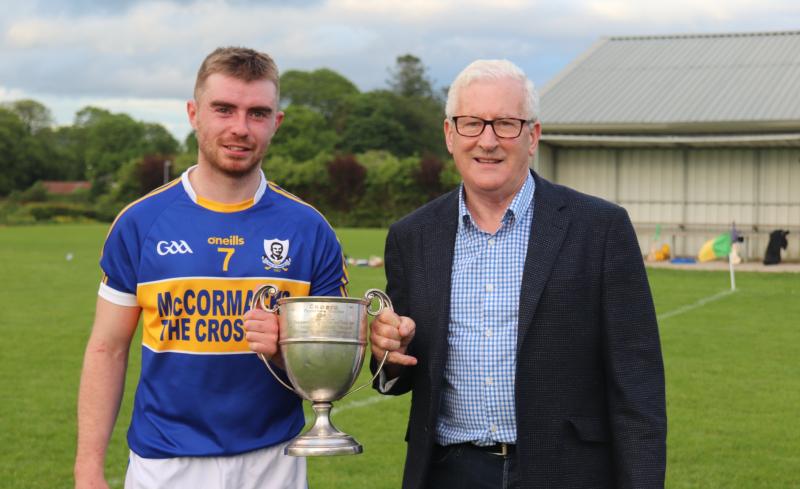 Sean Treacys are Bertie’s Bar Crosco Cup champions for the fourth time following their victory over the holders, Cashel King Cormacs, at Clonoulty on Wednesday evening last. This victory bridged a forty-four-year gap, their previous victory being 1978, and avenged their 1976 final defeat to the same opposition.

The final ten minutes of this pulsating contest was the difference between the sides, with Sean Treacys outscoring Cashel by 1.5 to 1.1, the Cashel goal coming from a free by Eoghan Connolly, four minutes into time added on. This period belonged to Treacys full forward, Darragh Kennedy, who hit a goal and two points, while Pat Deegan chipped in with three points also from open play.

The opening half was dictated by Cashel for long periods, and especially by Eoghan Connolly in the hearth of their defence. Connolly was a colossus from both open play and long range free taking during this period. The town side hit two goals in the open ten minutes, the first from Dylan Fitzelle at the far end, when he rose to a Ger Browne side line cut from out under the stand to keep the ball in play and then finishing to the net when the Treacys defence failed to clear.

The second goal, on ten minutes by Ger Browne, was as good a goal as has been scored anywhere this season. Browne picked up a ball on his own sixty-five and cut straight through the Treacys defence, before unleashing an unstoppable shot past the helpless Shane Stapleton. This goal gave Cashel a commanding seven-point lead. However Pat Deegan struck late in injury time for Treacys first goal when he netted at the road end in injury time. This cut the half time deficit to the minimum, Cashel K.C. 2.8, Sean Treacys 1.10

After the break scores were more evenly spread with Pat Deegan from placed balls and Mikey Feehan keeping Treacys ticking over. Treacys were back on level terms by the nineteenth minute and with the crowd behind them, they pushed on, with Darragh Kennedy finding new life during the final ten minutes.

Sean Treacys started this game with two points from Mikey Feehan and Seanie Ryan (Rogers) within three minutes. Cashel were back on level terms by the fifth minute, following a long range converted free from Eoghan Connolly and one from open play from Ger Browne. A Pat Carey free edged Treacys back in front, but Cashel began to exert their dominance in play onto the scoreboard. Dylan Fitzell goaled after nine minutes following a line ball from Ger Browne and a minute later Browne made all the running with the goal of the game.

Pat Carey kept Treacys in the game from placed balls, but overall Cashel kept their foot on the accelerator, with points from Dan Moloney, Aaron Browne and Eoghan Connolly. Treacys finished the half well, hitting three unanswered points and also managed to breach the Cashel defence with a good move involving Darragh Kennedy and Seanie Ryan (Rogers) before Pat Deegan netted in injury time. This goal on the brink of half time was the tonic needed by Treacys for the second half.

The second half was more even, with scores traded regularly and never more than two points between the sides during the opening twenty minutes. Aaron Browne and Pat Carey traded points early on, Eoghan Connolly hit his fifth long range effort after seventeen minutes, but Mikey Feehan replied with two on the trot to tie the game for only the third time. This set up the final ten minutes and the good crowd were not to be disappointed. Darragh Kennedy came more outfield and began to cause trouble to the Cashel defence. His goal with seven minutes of normal time remaining put

Treacys three to the good as the Cashel defence came under pressure. Kennedy added to minors in quick succession before a brace from Pat Deegan edged Treacys six clear as the game entered injury time. Cashel attacked and were rewarded with a twenty-meter free to the left of the goals. Eoghan Connolly’s low shot found the net but from the resulting puck out Pat Deegan put over the insurance point. Treacys ran out winners 2.23 to 3.16, in what was a hugely entertaining hard-fought game.

The Nenagh Tourist Office has been officially opened