Clonmel Commercials and Moyle Rovers will do battle in Cahir 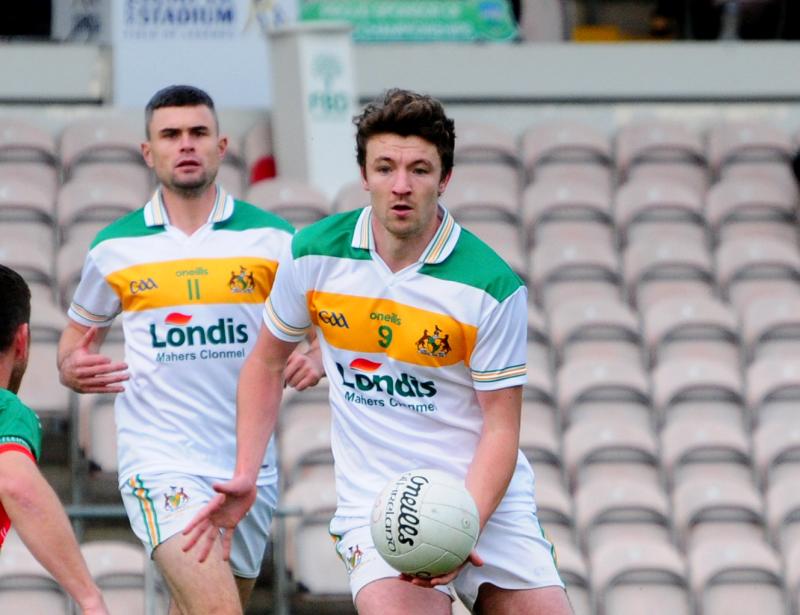 Clonmel Commercials’ comfortable victory over Ardfinnan in last Wednesday’s Clonmel Oil south Tipperary senior football championship semi-final has set up a meeting with their old rivals Moyle Rovers in the decider.
The final will be played at Cahir this Wednesday evening at 7.45.
Last week’s semi-final was played before a paltry attendance, with the game itself a sad reflection of the famous rivalry between these teams in days gone by.
Commercials dominated from the start, building a 10 points lead in the early stages that was extended to twelve points at the final whistle.
In the first quarter they led by 1-7 to no score, with the goal scored by Cian Smith and the seven points, all from play, coming from Kevin Fahey 0-2, Jack Kennedy 0-2, Jason Lonergan, Jamie Peters and Conal Kennedy.
It looked as if the Clonmel team could raise the standard whenever they wished, but in fairness to Ardfinnan they came back into the game in the second quarter.
In the 18th minute the team in maroon had a great goal from a counter attack when Liam Hewitt set up a one-two with James O’ Mahony, resulting in a goal.
However, in a strong response to that goal, Commercials added two points from play from Cian Smith and Sean O’Connor in the next three minutes.
The game was 25 minutes old before the first score came from a free, when Ardfinnan’s Liam Hewitt scored a point from 40 metres from his hands.
In the 26th minute Ardfinnan added another point from a free, this time from the boot of Luke O’Brien.
Clonmel Commercials bounced back before the interval with two points from frees, the first by Jason Lonergan and the second 30 metres out from Sean O’Connor to put Commercials 10 up at the break, 1-12 to Ardfinnan’s 1-2.
On the resumption, on what was a lovely evening for open football we had more of the same. Ardfinnan were first off the mark with a point from a free by Liam Hewitt.
Within a minute Jack Kennedy pointed a 20 metres free for Commercials and in the 35th minute Liam Hewitt pointed from a free on the 13 metre mark. The next two scores came from play for Commercials, points from Cian Smith and Kevin Fahey.
In the 40th minute Luke O’ Brien hit a real piledriver of a shot for Ardfinnan that hit the crossbar and came back into play, with a point taken by Colin O’Gorman from the rebound.
Aldo Matassa was next to score a Commercials point from play, leaving the score Commercials 1-16 to Ardfinnan’s 1-5 at the end of the third quarter.
The final quarter belonged to Ardfinnan, with two points from frees from Liam Hewitt and Michael Barlow and two from play from the full back Colm O’ Shaughnessy.
Commercials added late points from Sean O’Connor’s 45 metre free and Cathal Deely from play.
Commercials’ best were Seamus Kennedy, Jamie Peters, Kevin Fahey, Conal Kennedy, Jack Kennedy and Sean O’Connor.
For a gallant Ardfinnan Colm O’Shaughnessy, Sean Nagle, Liam Hewitt, Luke O’ Brien and James O’Mahony all caught the eye.
Commercials: Michael O’Reilly, Eamon Dunphy, Ciaran Cannon, Jamie Peters 0-1, Conor Deely, Seamus Kennedy, Kevin Fahey 0-3, Conal Kennedy 0-1, Cathal Deely, 0-1, Jason Lonergan 0-1, Jack Kennedy 0-5 (3F), Aldo Matassa 0-2, Cian Smith 1-1, Sean O’Connor 0-3 (1F), Eoin Fitzgerald.
Subs: Ruairi Leahy, Tadhg Condon.
Ardfinnan: Michael Goonan, Evan Barrett, Colm O’Shaughnessy 0-2, Jack O’Neill, Aaron Lonergan, Sean Nagle, Kevin Hogan, Liam Hewitt 1-2 (2F), Colm O’Gorman 0-1, Luke O’ Brien 0-1F, Michael Barlow 0-2F, Jason Coffey, Andrew Heffernan, James O’Mahony, Mike Hogan.
Referee: Philly Keane (St Patrick’s).