Saint Mary’s Church, Templemore, was built in 1790 on land donated by the Carden family 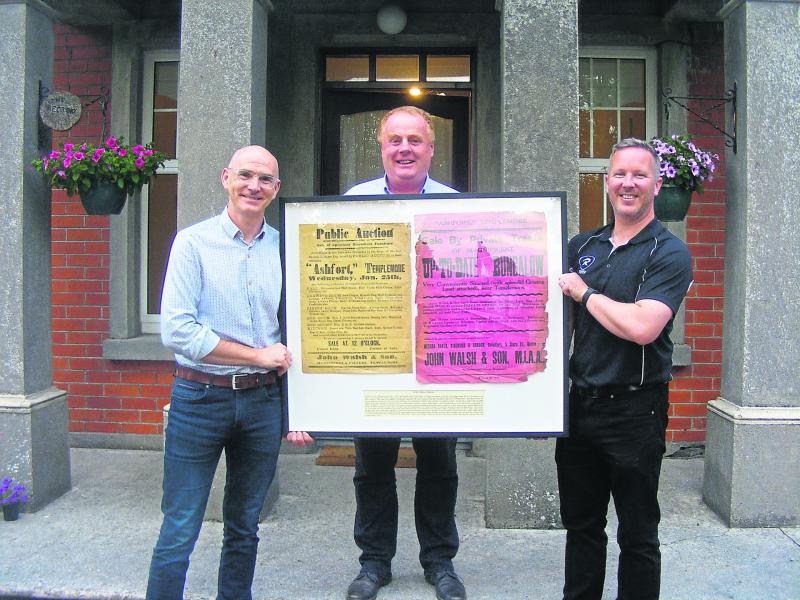 L/R: Paul Walsh, Ronan Loughnane, and Mark Cullinane, pictured with copies of the ads for the public auction of St Mary’s Rectory

Saint Mary’s Church, Templemore, was built in 1790 on land donated by the Carden family.

The project was overseen by the Reverend Harry Meggs Graves, Rector of Templemore at that time.
In conjunction with the Church, a Rectory was also built to provide living quarters for the Rectors who lived there throughout the nineteenth century.

Archdeacon McKinley arrived as Rector in 1929 following the retirement of Archdeacon White and duly took up residence at the Rectory. White decided to live out his retirement in Templemore and Duggan Brothers began the construction of this house in late 1928.

White took up residence in 1929 and called the house Ut Hagraturus Habita - My final resting place.
It was the second house built by Duggan Brothers and the only house on the Roscrea Road at the time. Following White’s death in 1932 the property was put up for public auction and advertised as Ashfort, Templemore. The origin of this title for the house is unknown. Archdeacon McKinley purchased the house and used it as a rental property.

Major General Wakeley who is buried in St Mary’s lived here for some years. In the early 1960’s the Representative Church Body purchased the house from McKinley for use as the “New Rectory. The Old Rectory and its lands were sold.

As McKinley was still the serving Rector he moved in and lived here until his retirement in 1965.
A gala fashion show was held in 1988 to raise funds for the repair of the rectory.

New fittings, alterations, carpets and curtains were added with all the work undertaken by local contractors. Thomas Greed, Percy Wallace, Philip Brennan, John McCarthy and Abbey Furniture were all involved under the supervision of the Diocesan architect, Mr Brady.

Since McKinley’s retirement Canon Johnstone, Reverend Leinster, Canon Young, Reverend Sherlock and Canon Cole-Baker have all resided here. The Reverend Alison Seymour-Whitely was the last serving Rector to reside here before the house was sold to the Cullinane family in 2022.