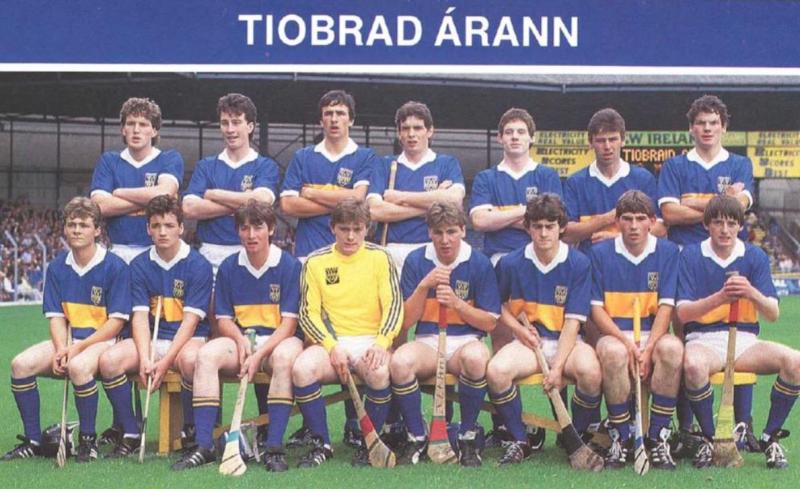 No minor compensation for senior disappointment, but at least the high credit of participating in a final that has won warm praise, much of it drawing favourable comparison with the clogged-up dourness of the rugged Galway - Kilkenny struggle.

It's a big let-down to the youngsters themselves, above all, but Offaly deserve our' sincere congratulations on their retention of the Irish Press Gup, the endless grit they showed in twice recovering , 'from deficits— and the lesson in elementary ground hurling they handed out in the process.

Divisional finals in Mid and West, plus an important replay in North, give plenty of choice for next Sunday. - It's tough to lose what could so easily have been won but the excellent minor game in the worst of Sunday's unlucky conditions was always going to leave somebody bitterly regretful of chances missed and errors made. The poor lads were not to be envied at the refs final and just a little hurried whistle.

A scenario, imaginatively equipped in hopeful prospect, with a lap of honour, trophy and captain hoisted, delighted congrats from the followers and happy receptions at home all dashed by a few meagre points; the delight was all Offaly and we must admit, deservedly on the day.

With such a large quota of previous winners, a year stronger, they were bound to be good and unafraid to win again, to leave our fellows as depressed as I recall minors being in 1945 and 1946 after loses to Dublin. The hurt will bite deep in youngsters memories but they played an honourable part on a day that revealed considerable lack of balance through the team, with uneven contribution to the cause.

The eventual fact of defeat was all the harder to take because hopes had been quite high. Maybe a bit flatteringly, one suspects in the light of Sunday's acid test, though there had been some unease in informed-circles about several positions. But how close Tipp came to building a decisive early iead - I think we lost it through not getting a minimum of one goal and several points more when we were going great.

Egan; at number fourteen may not have, in the final reckoning, scored at all — an unlooked for  possibility — but the others around him, apart from the brilliant Leahy, wasted some of the nicest, best placed, passes ever seen, in the first quarter. We were not well served at corner-forward, then or later, with two beautiful promptings by Egan deserving a finish to the net which Troy guarded superbly when shots did arrive. Leahy began like a personal, individual match runner and hurled well but had to forage further out when Offaly's determined ground hurling pinned us back within the last twenty minutes.

Tipp's early three point lead encouraged a brief illusion of a possible easy path but our midfield started to struggle and pressure came on Bonnar and Ryan at half-back, while O'Meara and Keane were called on inside rather too often for comfort. Traffic started to flow through the halves and then Offaly's couple of points were crucially buttressed with a goal that banished all' presumption. A decidedly bad goal, too, in its _prigin. An anxious ruck outside the square appeared to have ended safely with a clearance to left wing, where too slow a swing by a Tipp defender let in a forward to send the ball back whence it had come.

The crossing low shot by Morkan beat Reams to his right. A pre-interval recovery restored a Tipp lead of two points but did not wipe out the uneasiness generated by that Offaly goal, a breakthrough that certainly encouraged our rivals.

Though Deeley's fine points gave Tipp a healthy looking lead of four it wasn't the prelude to anything like control of the game. Offaly's ground play became a feature, also their strength in the clashes and the ground devouring dashes of their left flank forwards grew more ominous — only their bad, or luckless, shooting saved us several times from the consequences of midfield and halfback looseness.: Our lead was gradually eroded to parity at ten-all and the trend -was marginally adverse.

In the. anxiety, there appeared some confusion in our forward division, with Egan unsure as to whether to stay in or come out— he might profitably have been switched with Bohan earlier. Long deliveries from downfield led to several tame, wasteful wides — there didn't seem to be anyone back to save these. A long, hard spell without scores followed, with all to play for. O'Meara and Keane performed rescues near our goal. Young Quinn's run up. to the right ended with a narrow wide for the sub. Soon after then, came the fatal episode. Errity's long free struck the post, the rebound was transferred to the loose Morkan dead in front and he gave Kearns no hope at all.

From this out it became a desperate battle for Tipp. Deeley and Quinn brought us hope of perhaps a draw but the younger Pilkington, endorsing . pre-game worries about his potential, shot the final point. We frantically prayed for  time and opportunity for a winning goal but we had neither, only the sorrow of going down.