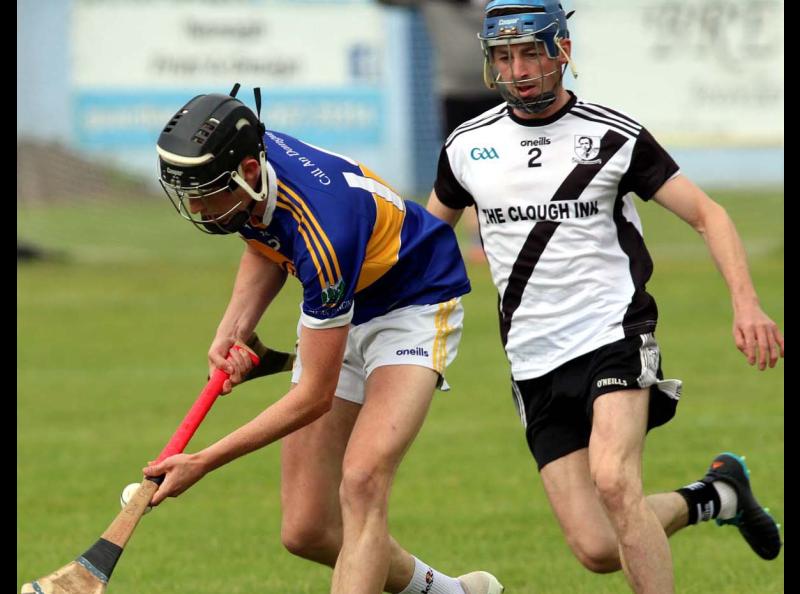 In a repeat of last year’s North final which Kiladangan won by five this seven goal thriller only came to life in the last quarter of normal time when Kiladangan let a nine point slip from their grasp with Jack Peters goal in the fourth minute of injury time saved the day for Kilruane momentarily.

When the teams returned for the twenty minutes of extra time the champions gradually increased the lead and after Barry Hogan blasted home a penalty in the 14th minute to make it 3-22 to 3-16 there was no way back for the challengers who refused to give up as Seamus Hennessy scored his second goal from a close in free but by that time, Kiladangan were looking forward to their clash with Toomevara in the North semi final next weekend.

Much was expected from this game and in the lead up to the tie there was much talk about the makeup of the champions fifteen as four of the North final winning team were absent as American bound Darragh Flannery, Declan McGrath, Billy Seymour and Willie Connors (recovering from a leg injury received in the Munster League game against Kerry last January) were replaced by championship debutants John O’Meara, Darragh Butler and Mathew Cleary plus the experienced Darren Moran.

Kilruane had their absentees also as goalkeeper Conor Doheny was replaced by Tipperary under 21 keeper Paudi Williams while their leading freetaker Conor Cleary was away on holidays.

No fault could be laid at the feet of Williams who produced a number of fine saves especially the one from Sean Hayes in the 47th minute but he didn’t expect to be called into action so soon in the opening nineteen seconds after Dan O’Meara prized home a goal.

Led by James Quigley, Alan Flynn and Joe Gallagher wind assisted Kiladangan were in splendid form all through the first half and after the excellent Sean Hayes made it 1-9 to 0-3 in the 25th minute they received a setback when Aaron Morgan prized home a well taken goal after strong work by Thomas Cleary in the lead up.

However, the umpires at the other end were in action after Hayes was called into action once again by scoring a great goal and reaching half time Kiladangan led 2-11 to 1-4.

The opening ten minutes of the second half were pretty much the same with Kiladangan maintaining their strong lead with Jack Loughnane pointing from halfway to make it 2-15 to 1-9 after forty three minutes.

However, Kilruane dominated the next ten minutes in terms of scores as they scored four in the trot including two Craig Morgan frees. Niall O’Meara was denied by Barry Hogan in the same period but after Joe Gallagher made it 2-17 to 1-14 in the 57th minute the champions must have felt their game was safe.

However, Kilruane never give up. With Eoin Hogan very much to the fore they continued to set up an attack and when the hard working Niall O’Meara was fouled on the edge of the large square.

Seamus Hennessey went low and sent one past Hogan. Sean Hayes moved Kiladangan four in front but Eoin Hogan matched him and as Kilruane maintained the attack another Hennessey free was saved but Jack Peters was in the right place to raise a green flag and force extra time at 2-18 to 3-15.

Kiladangan regained the lead in extra time but they only knew they were safe when Barry Hogan goaled from a penalty in the 14th minute before Paul Flynn picked up his fifth point a minute later.