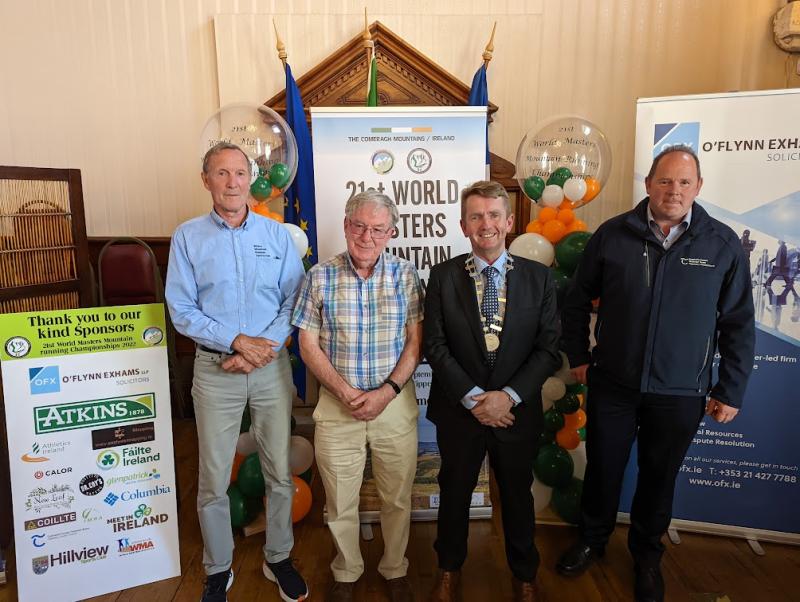 Above: At the launch of the World Masters Mountain Running Championship to be held in Clonmel from September 2-4 were, from left, Wolfgang Munzel, World Mountain Running Association; Seamus O’Doherty, Hillview Sports Club president; Mayor of Clonmel Michael Murphy and Cllr Andy Moloney

The 21st World Masters Mountain Running Championship, which will be held in Clonmel on the weekend of September 2-4, moved a step closer recently when the event was launched at the Town Hall in Clonmel.

Speaking at the event launch Mayor Michael Murphy stated “Clonmel is the perfect location to host these championships, it has a lot to offer.
“There isn’t a better place to experience a taste of Ireland’s great outdoors including the great Slievenamon (mountain), the Suir Blueway connecting Clonmel and Carrick-on-Suir and of course our Comeragh mountains.”

World Mountain Running Association (WMRA) technical delegate Wolfgang Münzel from Germany stated “this year the Irish Mountain Running Association is celebrating its 40th anniversary and there isn’t anything more important than honouring this anniversary than by staging the World Masters here in Clonmel.”
John Lenihan from Kerry, the only Irishman to win this championship in its 35-year history (in 1991) said “there’s something very special about the camaraderie of mountain running, so having the World Masters here is massive for Ireland and massive for the sport in the country.”

Veteran participants in past World Masters Mountain Running Championship, Tricha Blackburn and Tom Blackburn of the Galbally-based Mooreabbey Milers Athletic Club, came up with the idea to bring the championship to Ireland and they now lead the local organising committee.