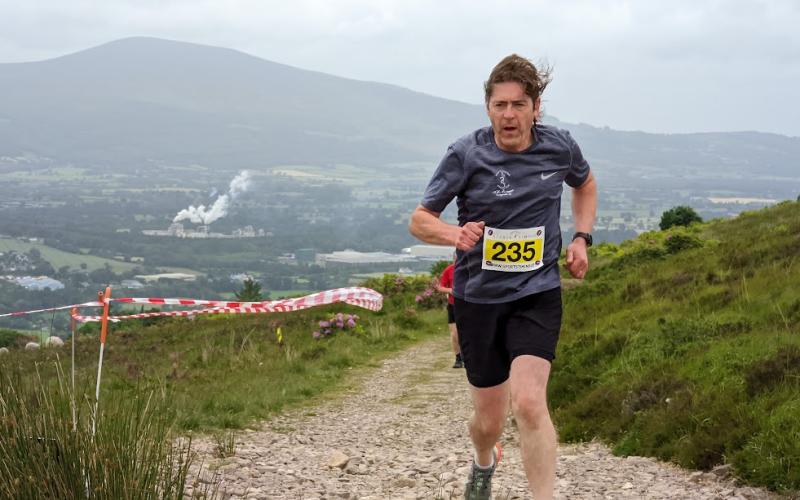 The Great Irish Trail Run, a test race on the same courses that will be run in early September by the top masters mountain runners in the world at the 21st World Masters Mountain Running Championship, was held on the day following the event launch in Clonmel.
This test race not only challenged runners from around the country but also provided an opportunity for the organisers to test their logistics and procedures prior to the world masters event itself in a couple of months’ time.
Runners started in age group waves beginning at Hillview Sports Club, which will be the championship headquarters, before heading up to the hills, trails and pastures on the foothills of the Comeraghs overlooking Clonmel.
Just as will happen in September, the test event featured two races; an 8.4kms with 510 metres of climbing for athletes over the age of 55, and a 10.6kms with a 602 metres climb for athletes aged 35 to 54.
Both courses started with a brutal two kilometres road climb, ascending over 200 metres. From there both courses turned off road over a mix of rough open sheep pasture, rolling forest roads and single-track trails.
Near the end of the course the younger age groups ran an extra two kilometres to Knockingadotha Peak before returning to the finish line at the Holy Year Cross overlooking Clonmel.
The fastest time of the day for the 10.6kms course was 48 minutes and 25 seconds run by John Kinsella (in the men aged 40-44 category) representing Bilboa AC from County Limerick.
The top female time was 57 minutes and 55 seconds run by Lorraine Bolster (aged 40-44 category) representing Mallow AC from County Cork.
84 runners finished the 10.6kms long course and 31 runners finished the 8.4kms short course. The oldest finishers were Jim Patterson (men aged 75-79) from County Down and Hazel Stapleton (female aged 75-79) from County Waterford.
“The course is unbelievable,” said William O’Donoghue, County Tipperary, who won the 60-64 age category.
“Clonmel’s hospitality is second to none and the Irish people are friendly. Putting on your country’s singlet to me is the most important thing, it’s a privilege to represent your country”, he stated.
“It was a lovely race,” said Majella Diskin, County Kerry, who won the female 65-69 age category.
“I thought it was a great chance to race the (world masters) course. I’m not mad on roads but I love the mountains, the hills and I love going downhill.
“I find with the mountain running there is great camaraderie, the people are friendly and the views are fabulous,” she said.