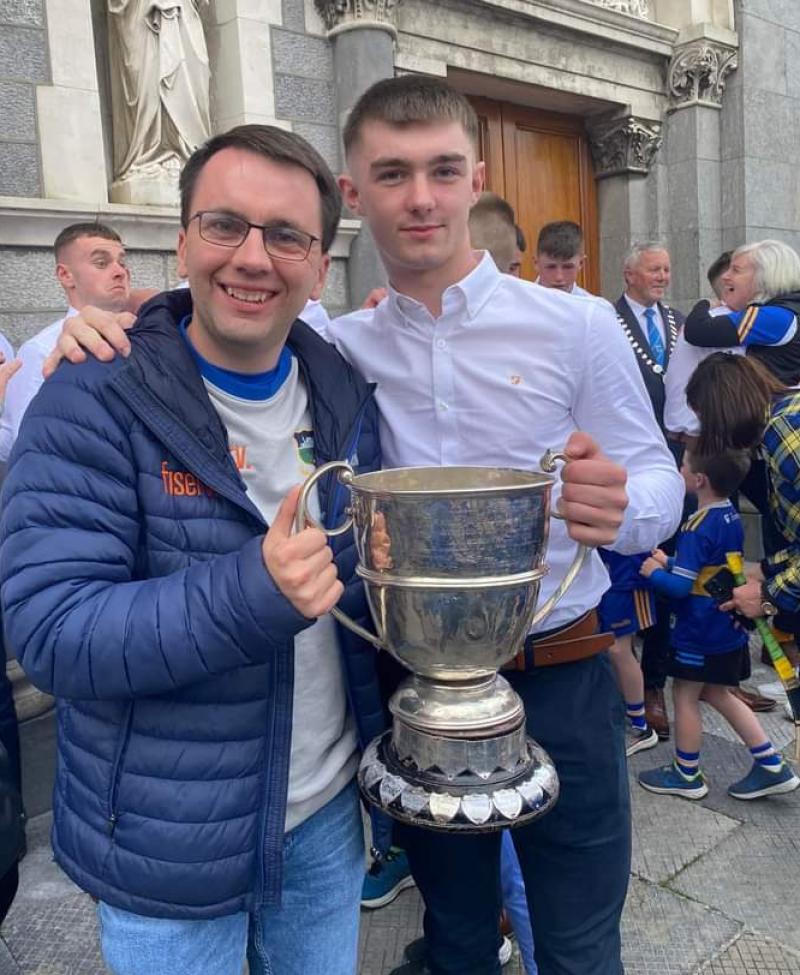 Sologhead’s Kevin Hanly and Cappawhite clubman and Tipp centre forward Conor Martin with the Irish Press Cup at the All Ireland winning homecoming at the Cathedral in Thurles on Sunday evening.

On Thursday evening last in Dundrum Sologhead and the Kickhams served up a thrilling Round 2 of the West Junior A football championship which ended level after sixty minutes of end to end football on a score line of, Sologhead  2-9 Kickhams 0-15. Twelve minutes into the game it was three points each with Eoin Riordan accounting for Sologhead three as both sets of defences were laying down markers on keeping scores to a minimum.

Sologhead made the breakthrough with the first of two goals that came their way with Paul Ryan at the end of a high ball on the edge of the square before turning and finishing to the net to go three points clear. Davy Butler, Conor Horgan and Dean Thompson were all on target for the Kickhams with well taken points and with the clock heading towards half time Tommy O’Mahoney was quickest off the mark to fire in Sologheads second goal as the Kickhams keeper failed to deal with a well directed Aaron Ryan ball into the square.

Holding a one point advantage at the break Sologhead went two up three minutes into the second half with an Aaron Ryan point and from here to the finish we had an array of points and near misses as both sides went in search of the winner. An Eoin Riordan pointed free and three converted frees by substitute Declan Riordan completed Sologheads tally of 2-9 but Davy Butler and Conor Horgans free taking for the Kickhams were proving a real twin threat in the Sologhead defence and indeed only for a brilliant save by Christopher Ryan from the boot of Horgan the end result may well have been a lot different.

Congratulations to Ciara O’Hora who captained Tipperary ladies in their All Ireland U16B Football Semi Final 4-14 to 2-8 victory over Donegal which was played in Roscommon on Wednesday evening last. They now go on to meet Kildare in the All Ireland Final on Wednesday July 13.(Throw in 7.30pm / venue to be confirmed)