The minor hurlers season has been characterised by an attitude of stay in the game; keep faithful to the plan; never give up; fight to the bitter end. 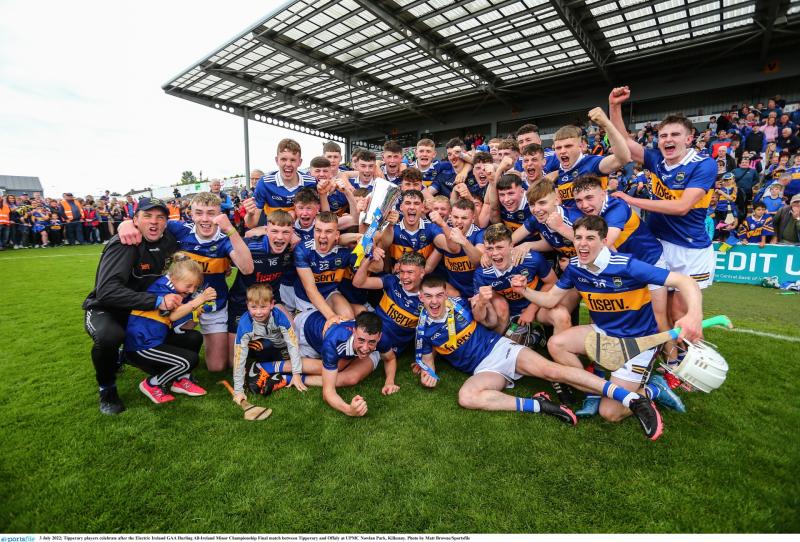 The victorious Tipperary minor hurling team celebrate with the silverware

Rarely, if ever, do Tipperary folk manage to depart Nowlan Park in such a state of elation.

A snatch-and-grab in such a manner as the Premier minors managed to capture the All-Ireland crown does not happen too often, especially across the border in 'Catland' – it just seems to happen with this particular bunch of resilient young men more often than most.

Their season has been characterised by an attitude of stay in the game; keep faithful to the plan; never give up; fight to the bitter end. A bitter end was certainly in sight on Sunday but somehow Tipperary managed to win the game. Who would have believed that winning the All-Ireland could possibly be done in a more dramatic manner than the Munster crown after that penalty shootout in Limerick against Clare. On that night, all agreed that penalties is an awful way for a team to lose a final- on the balance it seems as though Offaly, on Sunday, discovered an even more heartbreaking way to lose a final.

They were the team. Playing with purpose, passion, precision and pace, Tipperary couldn't match them. They had all the answers and the swagger was there in abundance as they looked to be on course for a famous win over their neighbours. But, the neighbours wouldn't go home. They kept coming back. Kept the scoreboard moving. Ultimately, Tipperary were to hit 1-5 of the last 1-6 of the game, despite being down to fourteen men following Damien Corbett’s straight red card dismissal.

Isn't it curious that with all the modern coaching; drilling; playing to plans etc. that it was a good old fashioned route one ball into the square which did the trick and helped seal the victory – Paddy McCormack's overhead pull being reminiscent of Sean McLoughlin back in the 1960's; Tommy or Donie O'Connell in the '80's; or Declan Ryan in the '90's. Declan Carr scored a brilliant overhead goal against Cork in the replay of the 1991 Munster Final in Semple Stadium to breath new life back into Tipperary, but even Carr's goal couldn't top McCormack's swipe which pilfered a Premier victory from the very jaws of defeat.

The atmosphere was electric for this clash – an appropriate description perhaps considering the Electric Ireland title sponsor. And, the only hikes being spoken of at this game was the long trip back home for whichever side happened to be travelling without the silverware -thankfully for Tipp, they had an extra passenger on the Glasheen's bus as they faced for Urlingford and they got to walk the Irish Press Cup over the border from Kilkenny in keeping with tradition what a memory that will be for these young men.

It had been a lengthy campaign for both sides but that didn't stop them displaying an enormous reservoir of energy from the moment the ball was thrown in. This game had it all – superb scores; wonderful tackling; thrills and spills aplenty; speed; skill and hard hitting.

And, by the halfway mark, Tipperary were coming out second best on most counts. Offaly had left nobody at home it seemed and each tackle, turnover and score was greeted with an almighty roar – a roar which was considerably higher on the decibel counter than the Tipperary ones.

Whether the crowd acted like a sixteenth man is debatable but Offaly certainly hurled with an abandon and drive which left Tipperary floundering at times. Indeed, the interval deficit could have been a lot more had they not hit eight wides and left a few goal chances after them.

The Leinster lads were hunting in packs and driving into Tipperary with power and strength – James Woodlock's men had faced big tests on their journey so far, but this was the biggest one yet, and considering that Offaly had hit 1-4 without reply before the interval to create the six point advantage - against the breeze – the Tipp boys were really up against it and facing a mountain.

The interval gave a chance to draw breath and reflect on what had been a pulsating game of hurling – it was hard to believe that these guys were all under seventeen years of age.

Tipperary got very little by way of breaks in this game – goal chances went abegging when green flags were badly needed and when Corbett was dismissed for throwing the hurley and almost certainly preventing a second Offaly goal, it seemed as though, that would be that – Offaly now had a sweeper and an extra man in defence.

A few switches made a difference though and Paddy McCormack moving to the edge of the square was one of them. His big hand was sought on more that once occasion, but Tipp were also electing to take their points – O'Callaghan, O'Farrell and McCormack obliging as they showed maturity and no sense of panic.

Offaly retreated and Aaron O'Halloran and Senan Butler cut it to two points as the fourth minute of injury time slipped by. Surely it was up? Not so, a last throw of the dice saw McCormack overhead on the square-bound sliothar – cue elation; ecstasy; delirium; madness; heartbreak, sickness and desolation. So many emotions in a few short seconds – the joy of sport.

One could only feel sorry for Offaly – what a horrible way to lose an All-Ireland final. But, they will know that they had this game in the bag and failed to close it out. A hard hard lesson for these young men to learn then – if they are the men they look to be, they will take it on the chin and come back stronger for it. The Faithful County needs to remain faithful to these boys now to help rehabilitate the fortunes of the green, white and gold.

Tipperary were behind in every department in this game, except the final score – the one, and only one, which counts. They got the break which had eluded them all game long and they took it.

What a boost this victory has been to the county – a first since 2016 and a twenty first title in total, to bring us level with the Cats. The joy on the faces of the well out-numbered supporters on the pitch after the game, coupled with the excitement of the players and management team was surreal. Did that just happen? Did we actually just snatch that game from the bowels of hell?

They did – again. What a team – a team which displayed the kind of resilience needed in Tipperary going forward.