Success follows Success
The Ladies of Cahir Park enjoyed a brilliant week of golf following the success of Lady Captain's Prize Day on Saturday, July 9.
On Monday, July 11, the Mary McKenna Diamond Trophy team welcomed Newcastle West Ladies for Round 3 of the Trophy competition. Cahir Park Team of Margaret Gill & Susan Carey, Kathleen Alton & Noreen Hally, Miriam Halley & Pauline Mulcahy, Mary Lyons & Kathleen Lonergan, Norma O'Brien & Chris Noonan, were the victors on the day playing excellent competitive golf against a very formidable Newcastle West team.
Excitement abounded around the clubhouse as the Ladies of Cahir Park celebrated.
Team Managers, Ger Lyons and Margaret Costello began planning for the Munster Final v Tralee Ladies. The Final has to be played out by August 24 and involves Home and Away matches.
A visit to the Kingdom is on after the Ladies of Tralee have stepped into the Premier County. A very exciting Munster Final is on the cards for the coveted Mary McKenna Diamond Trophy.

Ladies Junior Foursomes team are East Munster Winners
Saturday, July 16 was the day for Tramore, but not to the beach. Golfers headed to Tramore Golf Club which was resplendent on the day as the Club hosted numerous East Munster Finals sponsored by AIG Insurance.
Cahir Park Ladies Junior Foursomes Team were well prepared for the Ladies of Lee Valley G.C. (Cork) and played impressive golf in very warm conditions. The pairings of Caitlin Fitzgerald and Susie Burke, Michelle Keating and Joanne Quaid, Caroline Maher and Kathleen Alton were winners by the 14th Hole to the thrill of team managers Mary Lyons and Susan Carey.
Ladies Captain Margaret Gill was delighted to accept the East Munster Pennant on behalf of the Team and the Club and complimented and thanked everyone involved in the success of the event. Cahir Park are through to the All-Ireland Final of AIG Women’s Junior Foursomes to be played in Tramore G.C on the first week of September together with seven other Regional Finalist teams from the four provinces.
Cahir Park also play Tralee Women’s Junior Foursomes Team who are West Munster winners in a Munster Final to be played at Muskerry by mid-August. 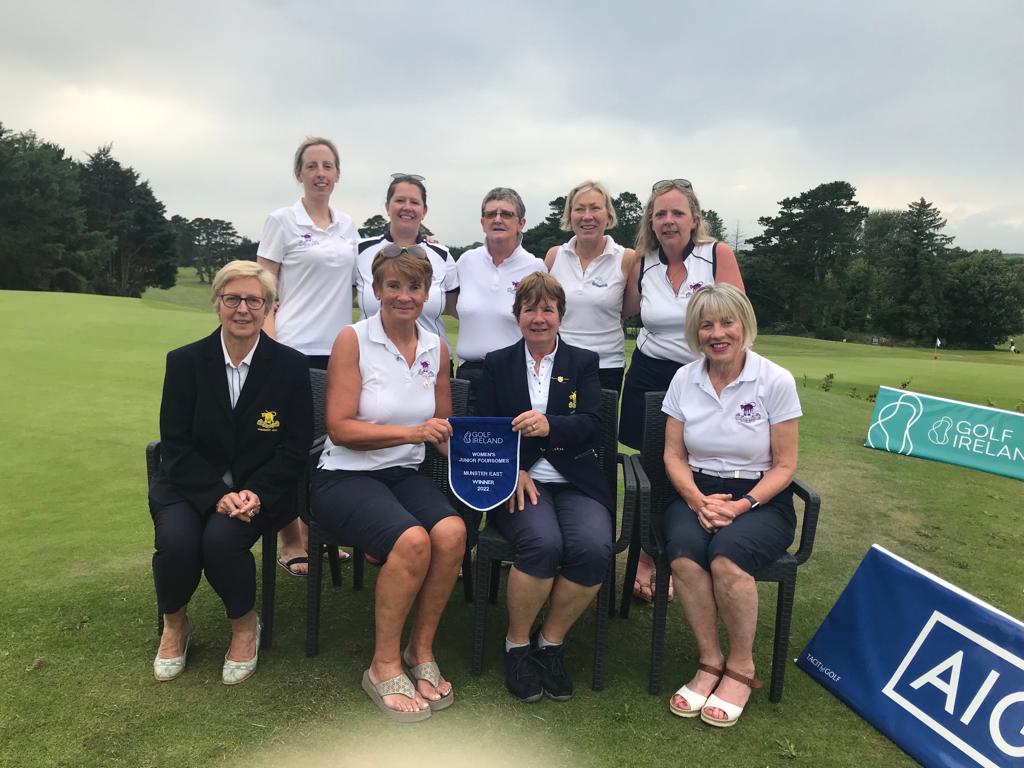 AIG Women’s Intermediate Cup quarter-final win
No time to recover for the Cahir Park Ladies!
Sunday, July 17 quickly dawned and the Intermediate team were on the tee box by 2pm to greet the challenge of Templemore Ladies in the East Munster Quarter Final of the Intermediate Cup.
The All-Ireland hurling final was clashing as was the great 150th British Open at St. Andrews, but all eyes were on Cahir Park Course which was in great condition despite sweltering sunshine.
A very strong Templemore team arrived and the matches were tight and hard fought throughout the afternoon.
The Ladies of Cahir Park were not out for defeat and pulled energy and strength together to enjoy fantastic success. Caitlin Fitzgerald, Joanne Quaid and Caroline Maher duplicated success over the two days. Kathleen Lonergan and Susan Carey added to the victory with Kathleen winning on the 18th and Susan called in after the 15th dormy 3.
The team managers Cathy O’Gorman and Mary Lyons were ecstatic with joy and now await word of opposition for the East Munster semi-final round.