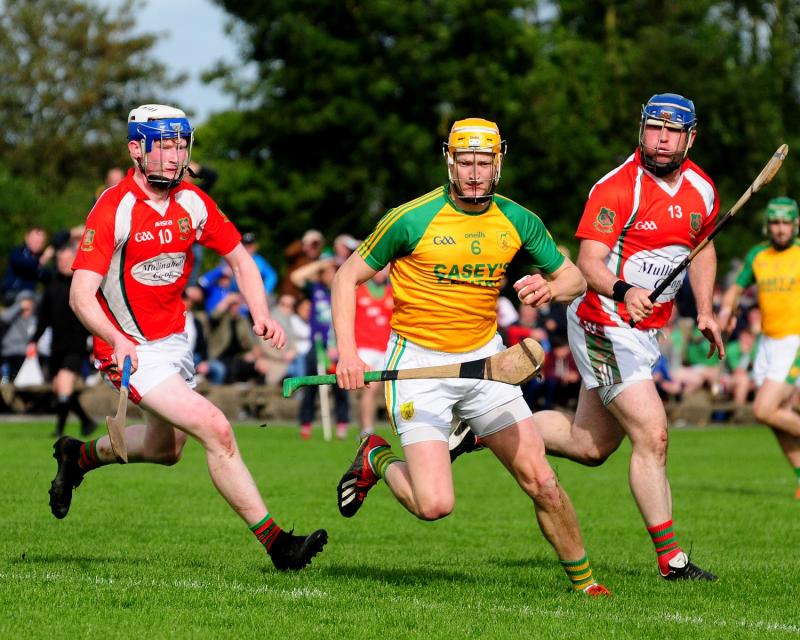 The Semi Finals of The Watch Centre sponsored North Junior ‘A’ Hurling Championship will take place this coming Friday 29th July at 7.15 pm .

Borris Ileigh and Kilruane MacDonaghs face each other in Toomevara with Conor Doyle refereeing. The other Semi Final sees Roscrea taking on Toomevara in Dolla with Alan Tierney officiating.

The top two teams in each group progress to the knock out stages. Two out of the three first placed teams progress straight to the Semi Finals whilst the remaining top placed team joins the three second placed teams in the Quarter Finals.

The fourth round of games in Group 2 took place last week. Silvermines had an impressive 7-18 to 2-14 win over Newport last Wednesday 20th July. It was a tight first half with Silvermines leading 1-9 to 0-8 at half time but the second half was a goal fest with eight scored in the half. Niall Curran scored a hat trick for Silvermines with Ciaran Timmons (2), Sean Spillane and Adam Steed also finding the back of the net for the Mines. Portroe had a 1-14 to 0-12 win over neighbours Burgess in the other game in the group. This win secures top spot in the group for Portroe with six points with Silvermines finishing second (also on six points). Portroe defeated Silvermines in the group stages so they top the group on head to head. There is still a round of games to take place in this group this coming Saturday with both games throwing in at 7.30 pm. Burgess host Templederry Kenyons in Kilcolman whilst Newport host Portroe.

In Group 3 – Shannon Rovers host Moneygall in Ballinderry this Saturday at 7.30 whilst on Sunday morning at 11 am – Ballina host Kiladangan. Ballina are currently top of the group with four points, Kiladangan second with three points, Moneygall third on one point with Shannon Rovers bottom with zero points.

Under 19 ‘A’ Hurling Championships:

The top placed team in each group progresses to the Semi Final. The second placed team will have home advantage in the Quarter Final against the third placed team from the opposite group.

In Group 2,  Roscrea will take on Kiladangan in the final game of the group on Wednesday 27th July at 7.45 pm in Roscrea with the victorious team securing home advantage in the Quarter Finals. Toomevara have already topped the group with two wins from two

Under 19 ‘B’ Hurling Championships:

In the ‘B’, the top two teams from the group progress to the knock out stages.

In Group 1 – Burgess host Newport whilst Lorrha Dorrha have a bye.

The first round of the County Hurling Championships took place last weekend.

In the Senior, Kiladangan had a 0-18 each draw with Loughmore Castleiney, Templederry Kenyons lost out to Drom Inch on a 2-19 to 2-30 scoreline, Borris Ileigh lost to Thurles Sarsfields by 1-14 to 2-23, Toomevara had a 3-12 to 2-15 draw with Mullinahone, Nenagh Eire Og drew with Clonoulty Rossmore 3-10 to 0-19 whilst Kilruane MacDonaghs had a comprehensive 4-22 to 0-10 win over Moycarkey Borris.