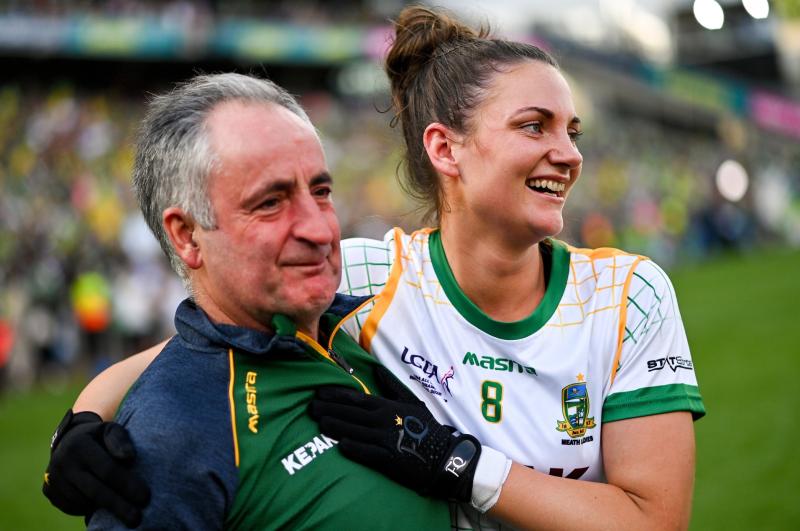 Meath midfielder Máire O'Shaughnessy whose mother hails from the parish of Drangan/Cloneen celebrates with manager Eamon Murray at Croke Park.

Well done to Máire O’Shaughnessy who played a big part in helping Meath to two in-a-row All Ireland Senior final victories on Sunday last in Croke Park when the Royallettes defeated Kerry in the final.

Máire is a daughter of Mary Ryan, originally from Drangan. Máire is also a niece of the current chairman of St Patrick's GAA Club in the parish of Drangan/Cloneen, James Ryan.

Also in action in Croke Park on Sunday last was Máire’s first cousin, Caoimhe Ryan, who was a lineswoman for the Intermediate final between Laois and Wexford in which Laois came out on top.

Indeed Caoimhe, who plays for the local St Patrick's Club, was originally chosen to run the line for the senior final between Meath and Kerry, but when she informed Headquarters that her first cousin would be playing in that decider, she was allocated the intermediate final instead.

Máire and Caoimhe are both granddaughters of John Ryan; their grandmother Anne, originally from the parish of Boherlahan/Dualla, died only a few weeks ago. She would have been tremendously proud of his grandchildren in Croke Park on the biggest day of the ladies football calendar.

Well done to both girls for their achievements yesterday.