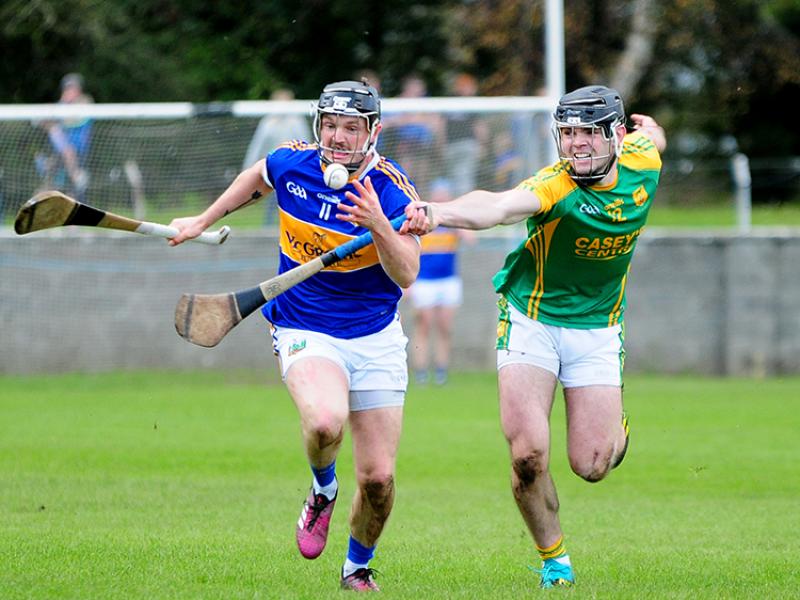 Borris Ileigh had a 1-23 to 2-12 win over Kilruane MacDonaghs in Toomevara. Borris Ileigh enjoyed a comfortable lead throughout and went into the half time break in front by 0-14 to 0-7. An Eoin Carroll goal on the 49th minute gave MacDonaghs hope as they bought the Borris lead back to five points. A Jack Fitzgerald goal five minutes later for Borris put the tie to bed with Eoin Carroll getting a consolation goal for MacDonaghs in the closing stages.

The other Semi Final between Toomevara and Roscrea was more of a tit for tat affair. Roscrea had a 0-8 to 1-4 half time lead with Shane Nolan scoring the Toomevara goal early in the half. Going into injury time , Roscrea’s three point lead was cancelled out with a Mark Grace goal for Toomevara. They then went onto snatch victory with a Conor O’Farrell point securing a 2-11 to 0-16 win for Toomevara.

The Final will take place on Friday 12th August with Borris Ileigh facing familiar foes Toomevara in Dolla. Action will throw in at 7pm with Peter Carroll officiating.

The top two teams in each group progress to the knock out stages. Two out of the three first placed teams progress straight to the Semi Finals whilst the remaining top placed team joins the three second placed teams in the Quarter Finals.

In Group 2, Burgess and Templederry Kenyons had a 2-13 to 1-16 draw in Kilcolman whilst Newport had a comfortable 3-17 to 1-10 win over Portroe. Despite the loss, Portroe finish top of the group with six points, Silvermines are second on six points, Newport third with four points, Templederry Kenyons fourth with three points whilst Burgess are fifth with one point.

In Group 3, Ballina had a slender 1-20 to 3-13 win over Kiladangan whilst Shannon Rovers conceded their game to Borrisokane. Ballina progress through as group winners with six points, Kiladangan and Moneygall are level on three points whilst Shannon Rovers are fourth on zero points. As Moneygall received a walkover, score difference is now null and void. Therefore, Moneygall and Kiladangan must have a play off to determine the Quarter Final spot. This play off will take place this Wednesday 3rd August at 7pm in Borrisokane.

The draw for the knock out stages took place last week by the North CCC. Lorrha Dorrha and Portroe have been drawn straight into the North Semi Finals. The Quarter Final line up sees Knockshegowna face Ballina this Wednesday 3rd August at 7pm in Ballina.

On Monday 8th August, Silvermines will host the winners of Moneygall/Kiladangan in Dolla at 7pm.

The Semi Finals will then take place on Saturday 13rd August with 6 pm throw ins for both games.

Under 19 ‘A’ Hurling Championships:

The group stages of the Ger Gavin sponsored North Under 19 ‘A’ Hurling Championship concluded last week.

The top placed team in each group progresses to the Semi Final. The second placed team will have home advantage in the Quarter Final against the third placed team from the opposite group.

In Group 1, Silvermines secured top spot in the group (finished with four points) after a 1-18 to 0-13 win over Nenagh Eire Og with Conor McKelvey scoring the Mines goal. Ballina finish second in the group  with two points whilst Nenagh Eire Og finish third with zero points.

In Group 2, Kiladangan conceded a walkover to Roscrea. Toomevara top group 2 with four points, Roscrea second on two points whilst Kiladangan are third with zero points.

Silvermines and Toomevara are straight into the Semi Finals which take place on Wednesday 17th August.

Under 19 ‘B’ Hurling Championships:

In the Ger Gavin sponsored North Under 19 ‘B’ Hurling Championship, the top two teams from the group progress to the knock out stages.

In Group 1, Burgess had an exciting 1-16 to 2-11 win over Newport with Micheal Ryan and Kieran Grace impressing for Burgess with the Burgess goal coming from Luke Conneely. Burgess finish top of the group whilst Lorrha Dorrha and Newport must play off for the second spot. This play off will take place this Wednesday 3rd August at 7.15 pm in Newport.

In Group 2, Kilruane MacDonaghs had a comprehensive 3-22 to 0-5 win over Borrisokane. MacDonaghs top the group on score difference over Borris Ileigh (both sides level on three points) whilst Borrisokane finish third on zero points.

In Group 3, Moneygall/Clonakenny secured top spot with a 3-14 to 0-11 win over Portroe, Ballinahinch/Templederry finished second with two points with Portroe third with zero.

The draw for the knock out stages took place last week by the North CCC. Both Quarter Finals will take place on Wednesday 10th August at 7pm. Kilruane MacDonaghs host the winners of Lorrha Dorrha v Newport in Cloughjordan whilst Borris Ileigh host Ballinahinch Templederry.

Both Burgess and Moneygall Clonakenny await in the Semi Finals which take place on Wednesday 17th August.

The North Board wish to extend sympathy to the friends and family of Paddy Mulrooney RIP (1937-2022). Paddy was a gatechecker with the North Board for many years and also played Senior,  Intermediate & Junior with Kilruane MacDonaghs, winning North Junior (1975), North & County Intermediate medals (1978). Ar dheis Dé go raibh a anam.