The settings were the Black Mills on Church Street, Roscrea Courthouse and Damer House 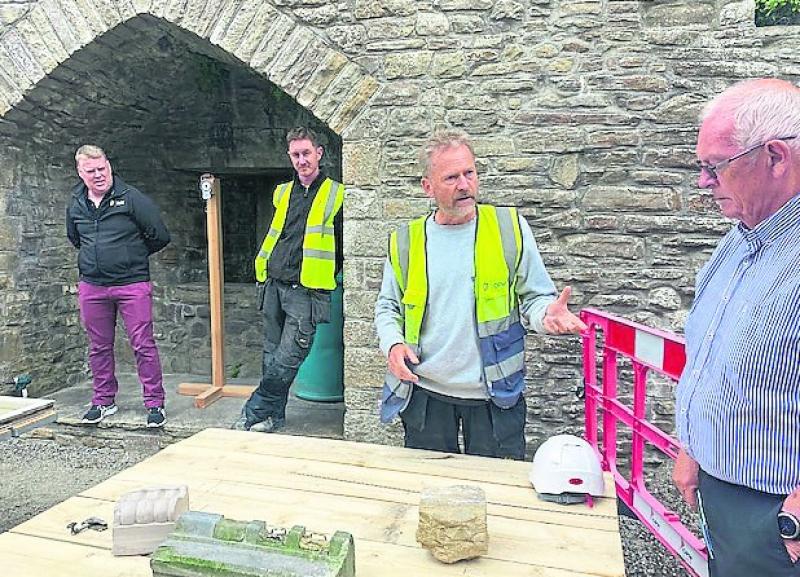 On Sunday August 14, events started with a performance by The Blue Light Smugglers, an acoustic harmony group that play bluegrass, country and Americana music.

The setting was the Black Mills on Church Street. Situated beside the Round Tower; the Black Mills is a stunning venue that is steeped in history. In 1722 The Black Mills (formerly known as the Manor Mills) was leased to Thomas Smallman, a merchant in Roscrea.

The right to hunt, hawk and fish was held by Curtis. Farmers were compelled to buy their seed in the Manor Mills. If they sourced it elsewhere, they would be charged tax of five shillings for every barrel brought in. In February 1864 the mills burned down.

Forward to 1991, the Lions Club Roscrea with help from the local community purchased the buildings. They were then handed over to the OPW for restoration. In April 2006 the Black Mills was officially opened with the 12th century High Cross taking pride of place. This year was our first to hold an event in the Black Mills and we hope to hold many more in the future.

On Tuesday 16th August we held our ‘Know Your Heritage Walking Tour’ with Dick Conroy. Starting at the Black Mills, Dick gave an interesting talk on the history of the Round Tower and the Black Mills. A short walk across the road to the graveyard led us to a headstone bearing the names James Dwyer and Bridget Hunt and onto Dick’s next topic, Daisy May Bates, CBE. Daisy (born Margaret Dwyer; 16 October 1859 – 18 April 1951) was an Irish-Australian journalist, welfare worker and student of Australian Aboriginal culture and society. Some Aboriginal people referred to Bates by the courtesy name Kabbarli "grandmother."

By the time of her death in 1951, Daisy Bates’s life had been dedicated almost exclusively to the Aboriginal tribes. After visiting Daisy’s birth place on Main St, we then went onto Market Square where we were given the history of the Market House and surrounding buildings, followed by a very interesting story on the removal of the fancy fountain from Market Square to its location on Rosemary Street.

Martin Dalton (conservation architect) gave a slideshow presentation on the works being carried out and this was followed by a visual presentation by Toby Burke (carpenter joiner), Brian Clancy (carpenter joiner) and Gunther Wolters (Master Stonemason). In 2020 there was a planned programme of work to repair some of the timber sashes scheduled to take place.

The inspection of the architraves showed that because of the decay of the detailed sandstone, there were large gaps between the face of the stone wall and the architraves, allowing significant ingress of water. Unless these gaps were addressed repair of the timber windows would be futile.

The inspection of the architraves found that many of them were in very poor repair to the point of structural failure. A decision was made that in tandem with any window repair the architraves needed urgent repair. In addition to the architraves, the lintels had also decayed. Detailed investigation of the windows indicated that the 1970’s restoration (supervised by Brian Molloy) had retained up to 80% of the original woodwork and eighteenth century glass (including spun and cylinder glass).

At present, as with the stone; the window repair strategy is to retain as much of the original fabric (including the 1970’s repair) as possible, and to splice in repair timber to replace any timber beyond repair through rot and decay.

Although we have not been informed of a completion date, we do know that the list of repairs is extensive and carrying out these works will ensure that Damer House will be visited for generations to come.

On Wednesday, August 17 , our third event led us to Roscrea Courthouse for our Rambling House. Designed by Jacob Owen, this detached three-bay double-height courthouse, dated 1820 has been in use by Age Friendly Roscrea for the last number of years and is a real hive of activity.

The Rambling Houses of long ago ensured that the music, song, dance and stories was preserved and handed down the generations. People rambled on in, no invite was needed, no guest turned away. On Wednesday evening, it did not take long for seats to be filled and the sound of music, laughter, stories and song to fill the air.

Fear an Tí Séamus Moloughney was kept busy moving the microphone around the room as there was no shortage of volunteers. The evening brought together young and old from near and far and it was great to see that the Irish Culture is well and truly alive in Roscrea.

Concluding our heritage week events we found ourselves once more in the courthouse on Sunday 21st August for our Basket Weaving Demonstration by Barry Noyce. Barry lives in North Tipperary and has been growing and using willow for the last 20 years.

He has amassed a collection of over 70 varieties and cuts his crop on an annual basis, both at his home and in outlying Sally Gardens he has established.

On Sunday, Barry demonstrated how to construct a creel and planter and encouraged all who attended to weave a few rounds.

His passion for willow and basketry was obvious on the day and he was happy to answer the many questions he was asked. We look forward to holding another event with Barry in the near future.
On behalf of the heritage society, Pamela Aitken and Brí Greene would like to thank all who attended heritage week events.

To The Blue Light Smugglers for their performance, Dick Conroy for guiding the walking tour. To OPW staff Mairtin, Toby, Brian, Gunther, Jacinta, Eileen and Sandra for a very informative presentation and the use of the Black Mills. To Fear an Tí Séamus Moloughney and all musicians, singers and storytellers for a fantastic evening.

To Anne Keevey and everyone who helped out in the courthouse. To Barry Noyce and Tipperary County Council for sponsoring the Basket Weaving Demonstration.
Without all your efforts, we would not have been able to organise these events. We look forward to organising many more!