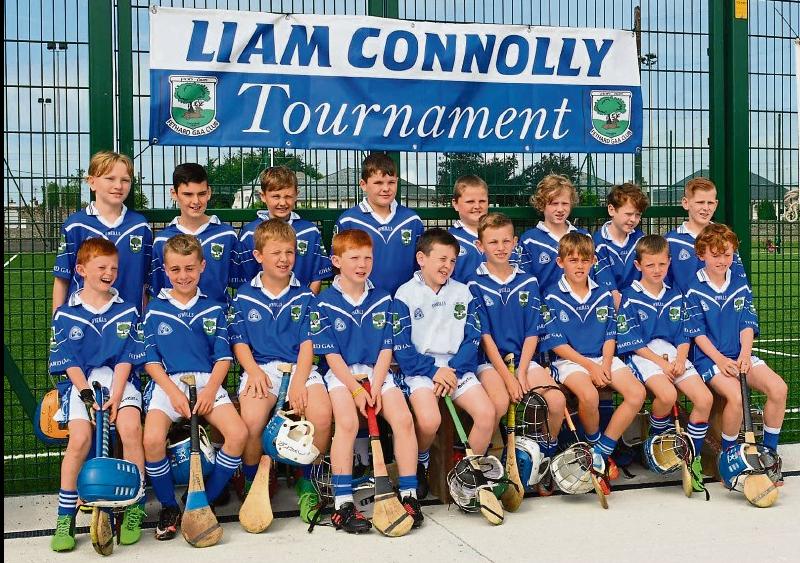 File photo: A Fethard U10 who took part in the Liam Connolly Cup in 2017

Eleven nominations are included for the Butler’s Bar (Fethard) Sports Achievement Award for the month of August
The nominations come from a wide range of sports including GAA (Mens and Ladies), Archery, Greyhound Racing, Soccer, Rugby and Horse Racing.
1. Sean Mc Garry Thompson. Gold medal winner at the S.I.F.A. (Society of Irish Field Archery) championships held in Limerick.
2. Fethard u/13 hurlers. Winners of the shield final at the Larry Hayes Memorial Tournament held at the Killenaule GAA complex.
3. Margaret Barrett, David Flanagan. Highlights of another sussessful greyhound training month for this husband and wife team were , winning the Boyle Sport 5000 in Kilkenny and the Ballymac Anton stakes in Tralee.
4. Gary Neville, Charlie Walsh, Rory O’Mahoney. Three U/15 Fethard footballers who were part of a Tipperary team who won the Humphrey Kelleher shield by beating Fermanagh in the final.
5. Charlie Walsh. Winner of the Tipperary u/16 soccer league with his club St. Kevin’s.
6. Sam Coen. All-rounder Sam gets this nomination because he has already ridden five winners on the pony racing circuit , including a double in Letterkenny Co.Donegal.
7. Aran Larkin. This MMA fighter who operates from the SBG club in Clonmel has just been picked on an Irish MMA elite squad.
8. Fethard Ladies seven-a-side Gaelic footballers. This team are the first from Tipperary to reach the final of the prestigious Naomh Mearnóg senior tournament. Narrowly beaten in the final by Galway side Kilkerrin that contained mostly Galway county players.
9. Michael Long. Young Fethard rugby player competed with Munster u/19s, narrowly beaten by Leinster in the Interprovincial final.
10. Jenna Coen, Kelly Ryan, Carrie Davey, Rose O’Donnell. Four Fethard ladies who were members of the Killenaule and Moyglass ladies soccer team who were just crowned Tipperary league winners.
11. Mark Neville, Liam Kiely. Tipperary u/16 development squad members from Fethard who were beaten by Kildare recently in a shield final.
The winner will be announced on Friday night next, September 2 at Butlers Bar, Main Street, Fethard.