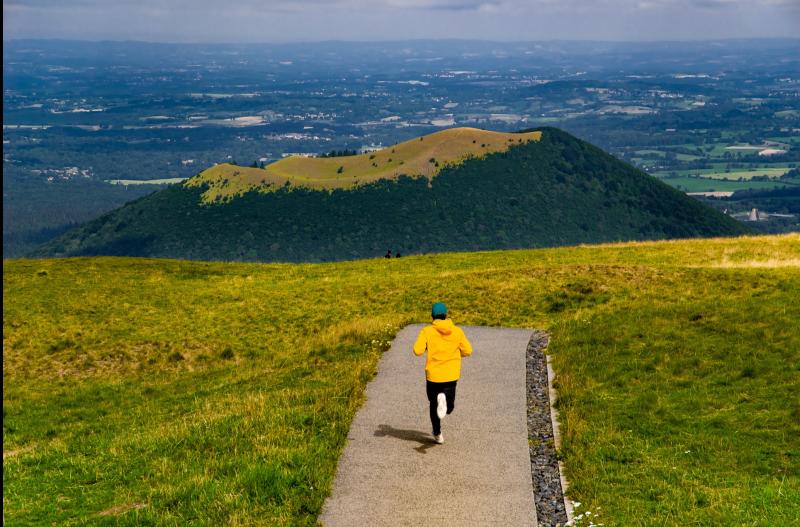 The view of the back of the Holy Year Cross on the Comeraghs, with Slievenamon in the background. Mass will be celebrated on Bank Holiday Monday at 11 am.

This coming Saturday, the 21st annual World Masters Mountain Running Championships takes place in Clonmel, Ireland. While Ireland has had strong representation at World Mountain Running Association (WMRA) events for several decades, this will be the first time this unique world championships for athletes ages 35 to 79 has been held on the emerald island. As veterans of past world masters, it was the dream of race directors Limerick based Tom and Tricha Blackburn to bring the event to Ireland. On September 3 their dream will be realized on the foothills of the Comeragh Mountains.

About the event, Tricha writes, “I am so proud to be part of the team that has worked so hard to bring the World Masters Mountain Running Championships to Ireland and especially to the historical town of Clonmel in County Tipperary."

Clonmel (Irish: Cluain Meala, meaning ‘honey meadow’) was founded in 1601 and is the county town and largest settlement of County Tipperary, Ireland.

Organized in conjunction with World Masters Athletics (WMA), the World Masters Mountain Running Championships has been the premier global off-road running event for thousands of athletes 35 years and older since 1998 when the championship was hosted by Kitzbuehel, Austria.

This weekend over 800 mountain runners from 29 nations will converge on Clonmel to test themselves against the competition and the course. Within each five year age category, medals will be given to the first three individuals and the first three Country/Nationality teams in all categories. As for the demographics of the field, 32% of registrants are women and the most well represented age group - age 45 to 49 - having over 150 participants.

"I look forward to drinking a pint of Guinness after the race, taking in the excitement and buzz of a World competition and to see how I compete on a world stage." - Steve Brightman (United States) M50

As expected, the highest number of mountain runners are coming from around Ireland with 430 per-registrants. Great Britain is sending 123 athletes while 61 are coming up from Italy and 27 from the United States. There are more than just North American and European athletes coming to Clonmel with those traveling the furthest coming from Japan, New Zealand, Venezuela and South Africa.

"The Romanian teams entering the races cautiously expect to end up with medals but are aware that the competition will be tough. The Irish do have a name for being dedicated sports competitors. Besides the races the expectation in the team is to be in touch with the Irish people, see green scenery, maybe rain and Guinness beer for celebrations." - Valeriu Rosetnc (Team Leader, Romania)

"We hope that the athletes, families and friends traveling here from all over the world have a happy and memorable experience of our mountains, our culture and of the Irish people. We look forward to spending these few days together competing for our countries and celebrating our achievements creating great memories and friendships. Wishing you all the very best of luck." - Laura Flynn (Irish Mountain Running Association) and Tricha Blackburn (Race Director)