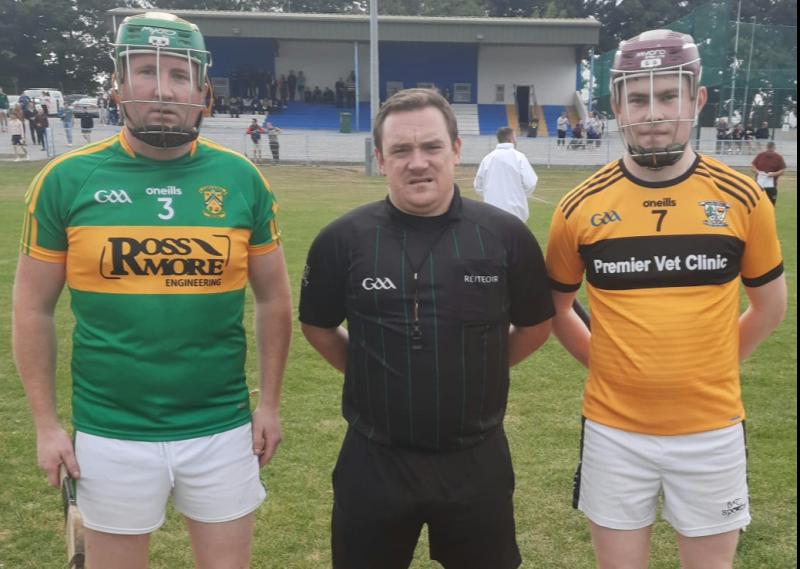 Kickhams are through to the final of the Tipperary Co-Op West Junior B Hurling Championship, following their two-point victory over the holders, Clonoulty Rossmore, at New Inn on Friday evening.

In a game that never reached the expected heights, Kickhams just about deserved this victory, they had match winners in Shane Morrissey and Brendan Ryan, who caused all sorts of problems to the Clonoulty defence throughout, with Morrissey’s goal after eight minutes laying the foundation for this victory. Kickhams also got in for goal number two seven minutes before the break, to lead by four at half time.

Play in the second half was held up for a good ten minutes shortly after the restart, following an injury to a Kickhams player and on resumption play was evenly enough balanced, with Kickhams relying on Brendan Ryan for most of their scores. Clonoulty made a late comeback with a Cathal Ryan (Raymond) goal, but time ran out for the holders, with Brendan Ryan having the final say when he put over at the far end.

Brendan Ryan got the scoreboard ticking over when he pointed at the village end, inside the opening minute. After this it took a while for both sides to get into any rhythm, but Keelan Ryan struck two long range points in quick succession to ease Clonoulty in front by the sixth minute. This was to be the only time that the holders would lead in this game, as Kickhams settled easier and more or less dictated the game. Shane Morrissey got in rather easily for the opening goal on eight minutes, and from that on, this goal proved to be the real difference between the sides.

Odhran Quirke began to cause problems on the edge of the square and hit two good points either side of similar scores by Brendan Ryan and Shane Morrissey. A Peter Comerford point put three between the sides before Cathal Ryan (Raymond) cut the deficit to the minimum with two good points, one coming from a placed ball.

Alan Butler got in for goal number two, seven minutes before the interval, finishing off a good Kickhams move. Shane Morrissey and Brendan Ryan added further points, cancelling out Oisin Fryday and Nicky Mockler, to leave the half time score, Kickhams 2.6, Clonoulty Rossmore 0.8.

Clonoulty started the second half in a much more positive fashion and Cathal Ryan and Oisin Fryday had points inside the opening three minutes. However an injury to a Kickhams player resulted in a ten minute delay, while medical attention was administered out on the field.

Play resumed around the twelfth minute and Brendan Ryan continued to be involved in most of the Kickhams attacks, hitting two points in a three minute spell before the seventeenth minute. Clonoulty hit back with points from Oisin Fryday, who was coming more into the game, and Odhran Quirke, but were unable to get the goal that was required to give them momentum. Anytime that Clonoulty hit back, Kickhams, and in particular Brendan Ryan, had the ability to pull back a vital score.

Heading down the home straight, Cathal Ryan (Raymond) managed to breach the Kickhams defence when he finished a good move to the net, to leave the minimum between the sides. Extra time looked a distinct possibility, but in a final attack, man of the match, Brendan Ryan put over at the far end to put two between the sides and a place in the final in which they will face Sologhead.