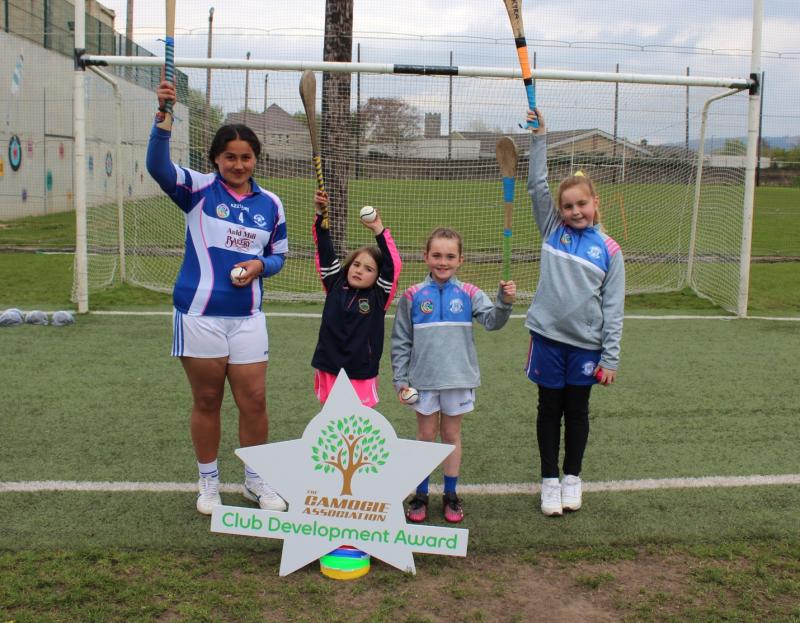 Pictured at the presentation of training equipment from the Camogie Association to St Mary’s Hurling and Camogie Club in recognition of their selection for the Club Development Awards.

St Mary’s Camogie Club has been selected for a National Club Development Award in recognition of the successful rejuvenation of camogie at the heart of St Mary’s club in Clonmel.

The award programme, run by the Camogie Association, has been developed to assist and acknowledge the efforts of volunteers in growing the game of camogie. Eight clubs were included across the country this year from Armagh to Wexford, with St Mary’s the only Tipperary club selected. It builds on the massive growth in recent years in the profile of women in sport and the importance of successful foundations in new clubs to sustain long-term participation in camogie.

St Mary’s recommenced its camogie club last year, alongside the well- established hurling club, and over the past 18 months has grown to 120 active members and now has teams at all grades from Under 6 up to Under 12s. The Under 12s girls’ team did the club proud this year, becoming the first grade to participate in championship action and the club looks forward to them moving up to Under 14 next year and continuing to build all the way up to senior.

The club continues to grow and attract new members, benefitting from a very active partnership with local schools. The club relies heavily on volunteers and a hard-working and dedicated parents committee, and has had good success this year recruiting a number of new coaches to get involved at each grade.

The club has established a progressive Sports for All initiative, providing one hour of inclusive sporting activity for children who cannot ordinarily take part in sporting activities. A Mothers and Others camogie group has also taken off, with many of the group new to the sport of camogie and enjoying the regular training sessions and picking up a new skill.

St Mary’s was delighted to receive some new training equipment from the Camogie Association and ongoing support to build capacity in key areas including PRO and coaching as part of the award programme.

According to club and education support officer at the Camogie Association, Liam Clancy:

“We are delighted to have such a vibrant club such as S. Mary’s engaging in the Camogie Association’s Club Development Award for the 2022 season. The club’s volunteers have shaped their efforts in further developing its sporting environment, both on and off the field, through the selection of project areas across social camogie, coach upskilling, PRO training and building constructive relationships. As programme co-ordinator, I am delighted to see clubs such as St Mary’s exercising this award as an opportunity for recognition of its extensive efforts to further enhance the camogie landscape within Tipperary, and indeed the Munster region.”