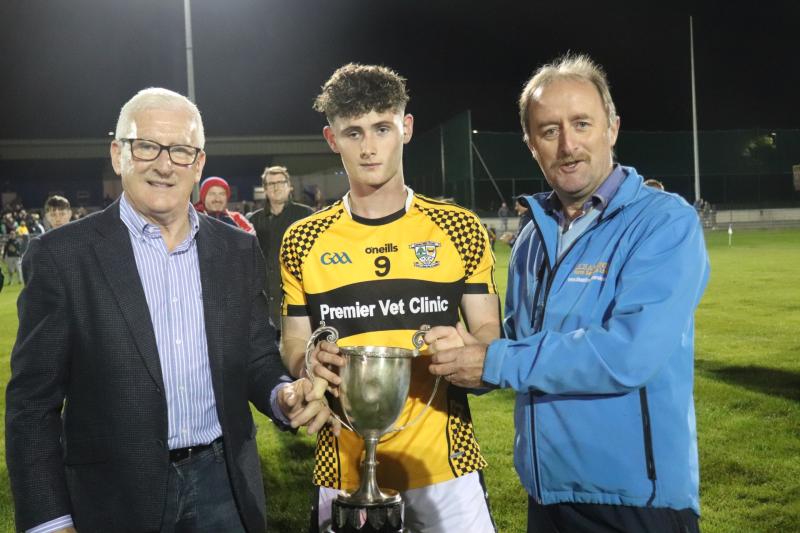 By: Francis Coughlan at New Inn

One hundred and sixty minutes, 15 goals, 80 points and just one point in the difference as Knockavilla Donaskeigh retained their Joe Hayes Cleanline West U19A Hurling title after two titanic battles against Clonoulty/Rossmore.

Part two of the saga unfolded in New Inn on Wednesday night was for the most a carbon copy of their meeting two weeks previous in Golden.

Just like the replay both sides had their periods of dominance and looked set to take the honours. Keelan Ryan was given the job of picking up Kickhams dangerman Orrin Jones and this would become one of the battles of the game. Robert Doyle injured in the game in Golden, started at full forward instead of centre back which meant Jamie Davern was deployed to six while Stephen Ferncombe came out the field. 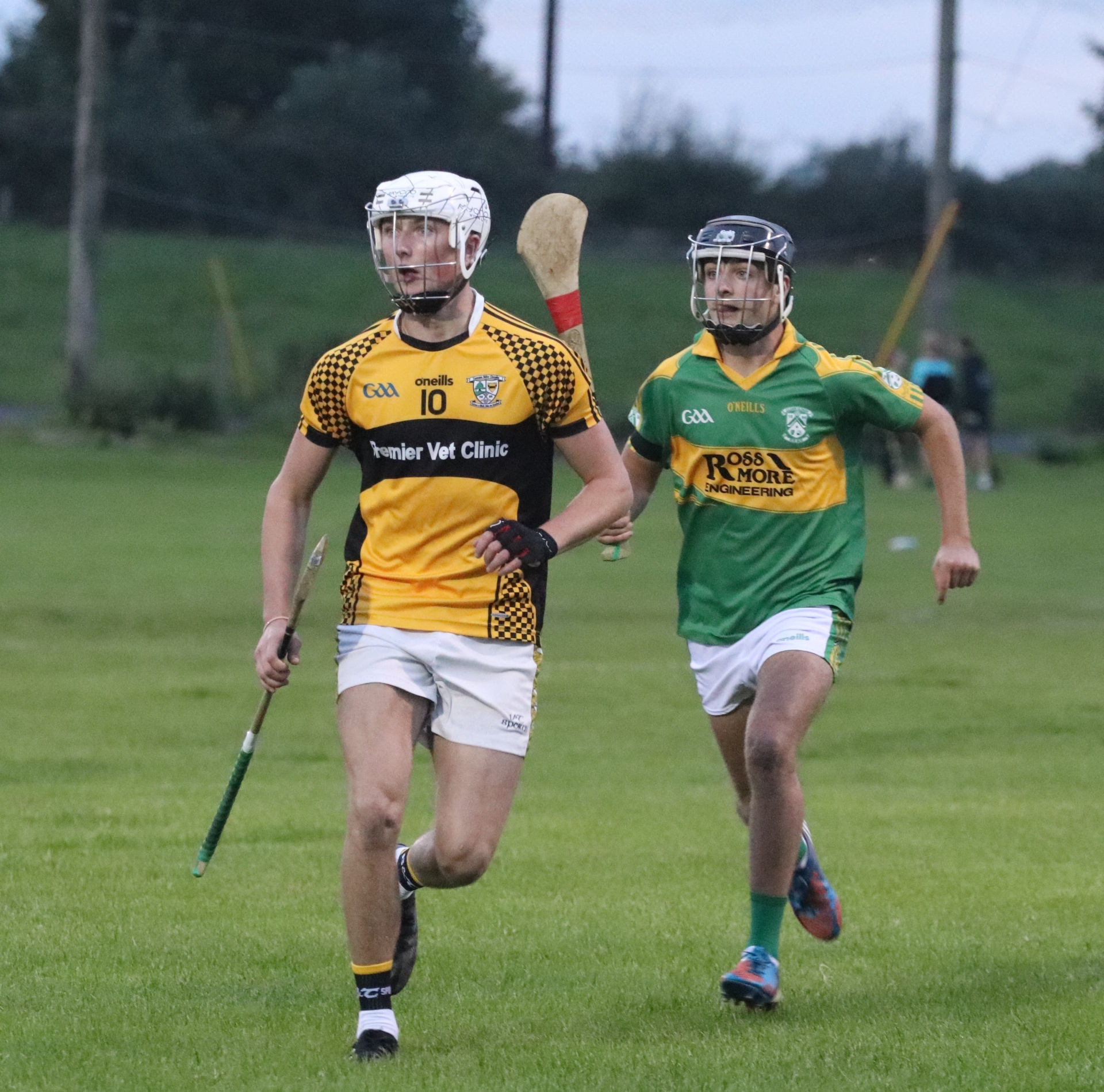 A tit for tat start saw the sides level three times in the opening nine minutes. Orrin Jones with three for Kickhams while Stephen Ferncombe continued his form from the drawn game with his sides two opening points before Robert Doyle opened his. Doyle starting to cause serious problems at full forward.

Clonoulty/Rossmore were coming far more into the game and not without goal chances with Conor Kennedy, Robert Doyle and Danny Slattery all having chances. Slattery’s effort saved well by Eoin Horgan with the resulting sixty-five pointed by Ferncombe. As the game entered the end of the first quarter Ferncombe pointed two further frees to edge Clonoulty/Rossmore ahead for the first time in the contest.

Frank O’Dwyer’s goal gave Clonoulty/Rossmore a big advantage as they started the second quarter. O’Dwyer putting his hand up bravely to gain possession before finding the net. Almost immediately Sean Cannon responded for the defending champions, cutting in from the sideline to find the top of the net.

Ferncombe’s accuracy was a big asset and he helped Clonoulty/Rossmore to a four-point advantage with eight to play in the half. A disruption in play seemed to allow Kickhams to settle and they dominated the remaining minutes of the half hitting five points without reply to take a one-point advantage at the break.

Adam Daly now finding his way with three points while Shane Buckley and the very dangerous Orrin Jones also found the range. Kickhams efficiency showing with just one wide in the opening half to Clonoulty/Rossmore’s six.

Conor Horgan pointed a free on the resumption for Kickhams but one each from Stephen Ferncombe and Danny Slattery tied proceedings. Kickhams looked in control when Orrin Jones found the net and Adam Daly pointed to now give Kickhams a four point advantage by the sixth minute.

It was out to five by the twelfth minute when Daly now finding space added two further points. Kickhams looked as though they could pull away but Clonoulty/Rossmore were putting up a stubborn resistance. Kickhams had earlier moved Aidan Duggan back to man mark Robert Doyle who was continuing to cause problems now moved Conor Horgan back to try and curb the effect of Stephen Ferncombe. Clonoulty/Rossmore though as a result seemed to find more space in the middle third with Danny Slattery running at the Kickhams defence causing problems while Alex Carroll was now coming far more into the game.

While Kickhams held sway on the board, Danny Slattery and Robert Doyle both pointed either side of an effort from Orrin Jones. The gap just three points with ten to play. Kickhams still looked the more threatening of the two sides when attacking and Michael Gleeson brought the gap back out to four points but in the space of four minutes Kickhams were now chasing the game.

When Robert Doyle was brought down heading for goal referee John O’Grady signalled a penalty which Stephen Ferncombe duly obliged for his first goal of the game. Three minutes later Clonoulty/Rossmore were awarded a twenty-one yard free. Ferncombe stepped up to take, would he wouldn’t he go for goal like the drawn goal – he went for it and now Clonoulty/Rossmore held the aces.

Above: The victorious Knockavilla Donaskeigh Kickhams panel and mentors pictured with the silverware

Conor Horgan now released from his man making duties responded with a point but Clonoulty/Rossmore looked the most likely to win. Frank O’Dwyer and Stephen Ferncombe (free) pointed to bring the lead out to three. The game now in the red and the tension building both sides swapped points.

Clonoulty/Rossmore failed to take another chance which would have pushed them four clear. Deep in injury time Micheal Gleeson found Conor Horgan just outside the edge of the square with a pass, with the latter turning 360 degrees to get onto his right before unleashing an unstoppable shot passed Jason O’Dwyer. With that went the full-time whistle and extra-time beckoned for the second game in a row.

Orrin Jones pointed twice immediately on the resumption from play and a placed ball giving his side a two-point advantage. The tit for tat nature of the game continued and by the eight-minute Danny Slattery and Stephen Ferncombe had tied proceedings once more. Orrin Jones had the last say of the half with a point from a placed ball to give his side a one-point interval lead.

Alex Carroll continued to be a threat for Clonoulty/Rossmore and he tied the game when the sides resumed. Kickhams through responded well with Conor Horgan from play while brother Eoin pointed a monster free from long range. They were two crucial scores and while Stephen Ferncombe pointed a free in response, Clonoulty/Rossmore despite having chances were unable to draw level.

Eventually this gripping contest produced a winner with Kickhams taking the honours by the minimum. Their efficiency in front of goal a huge bonus with Kickhams hitting just six wides to Clonoulty/Rossmore’s eighteen.