The game was played at Holycross 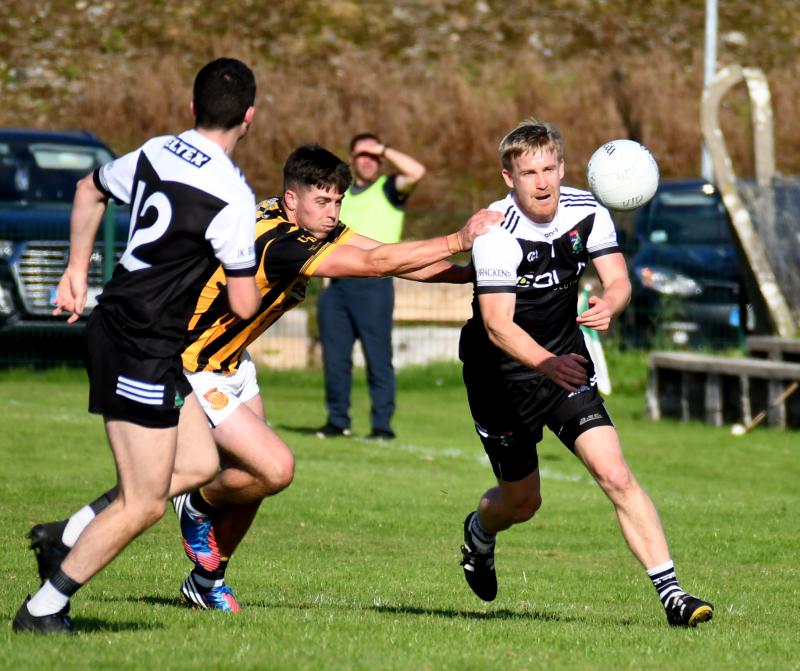 Upperchurch-Drombane’s rising football profile was confirmed by this four points win over a fancied J K Brackens in the FBD Insurance county senior football quarter-final at Holycross on Saturday.

Beaten at this stage of the championship last year, “The Church” are in the semi-finals for the first time and they are there on merit, thanks to a consistently high level of performance in terms of both the quality of their play and the energy they apply to it.

In this encounter they never allowed J K Brackens develop their running game with an “in your face” approach that the Templemore boys struggled to deal with. It was a very competitive encounter and at times referee Joe Leahy’s patience was tested but players held their heads, took the knocks, and got on with it. 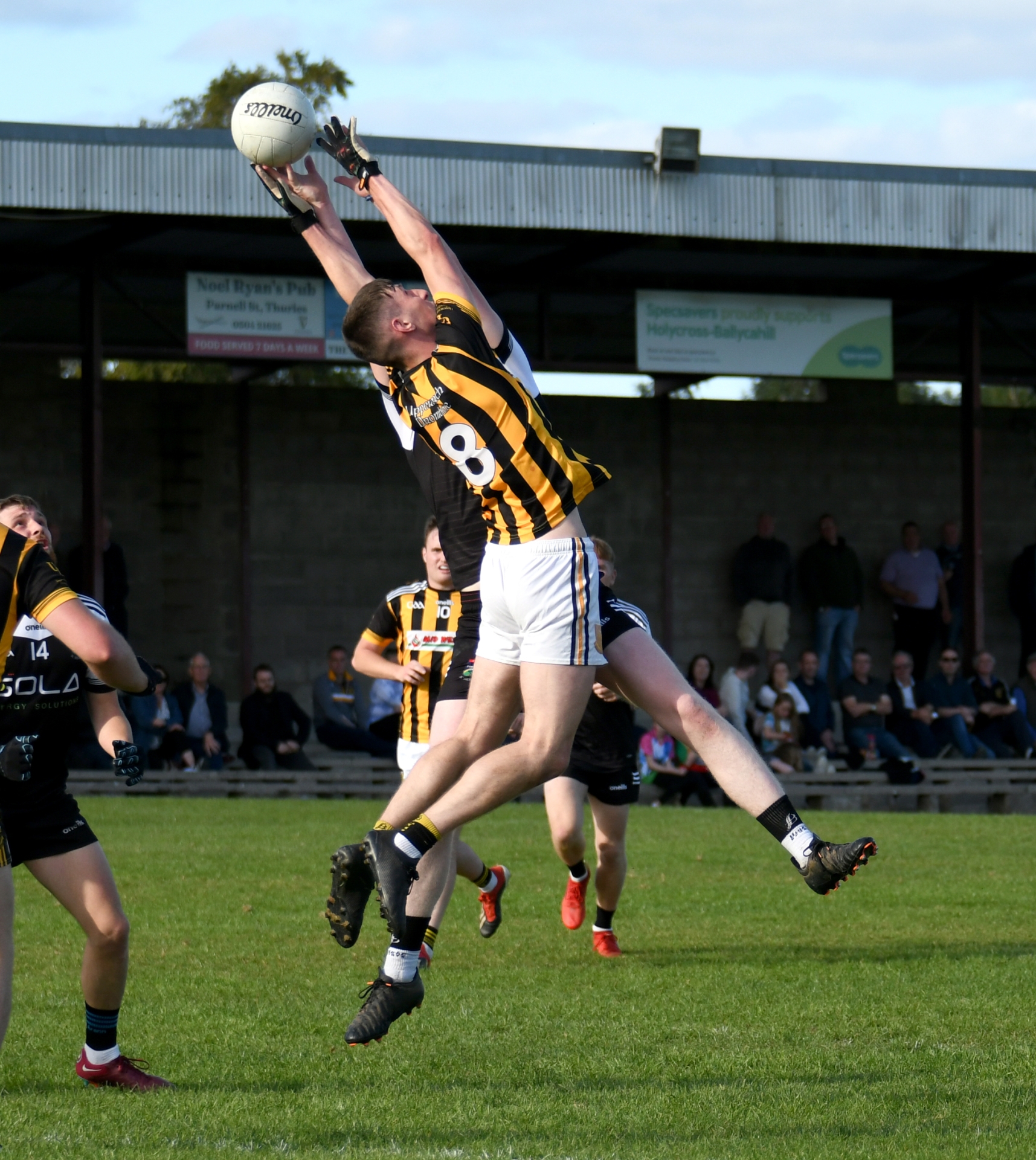 These sides meet again this week-end in the county hurling quarter-final and Saturday’s engagement will surely have whetted appetites for that encounter. There was little between them in the football quarter-final; it is unlikely the hurling contest will be any different and one can only speculate as to what, if any, bearing the football result will have on the hurling contest.

Essentially the score that decided this game came in injury time in the first half when Paul Shanahan confidently fired home his penalty shot after Loughlin Ryan was grounded by Brackens goalie Kuba Beben who got a black card for his effort to foil the Upperchurchman. That score put Upperchurch 1-4 to 0-3 ahead but Dean McEnroe’s pointed free for Brackens two minutes later left a goal in it at the break, 0-4 to 1-4.

Upperchurch’s work-rate in that period was very impressive as they stifled J K Brackens’ attempts to get their running game in motion. Brackens opened brightly with points from Shane Bourke and Jack Kennedy but Loughlin Ryan and Paul Shanahan levelled for Upperchurch after 13 minutes. Niall Quinlan and Jack Butler swapped points before Luke Shanahan nudged Upperchurch ahead in the 22nd minute.

It was all very tight, and a trifle niggly as Shane Bourke saw his goal bound effort smartly saved by James Griffin in the Upperchurch goal a minute later. The penalty goal came in injury time and at the break the eventual winners were 1-4 to 0-4 ahead. 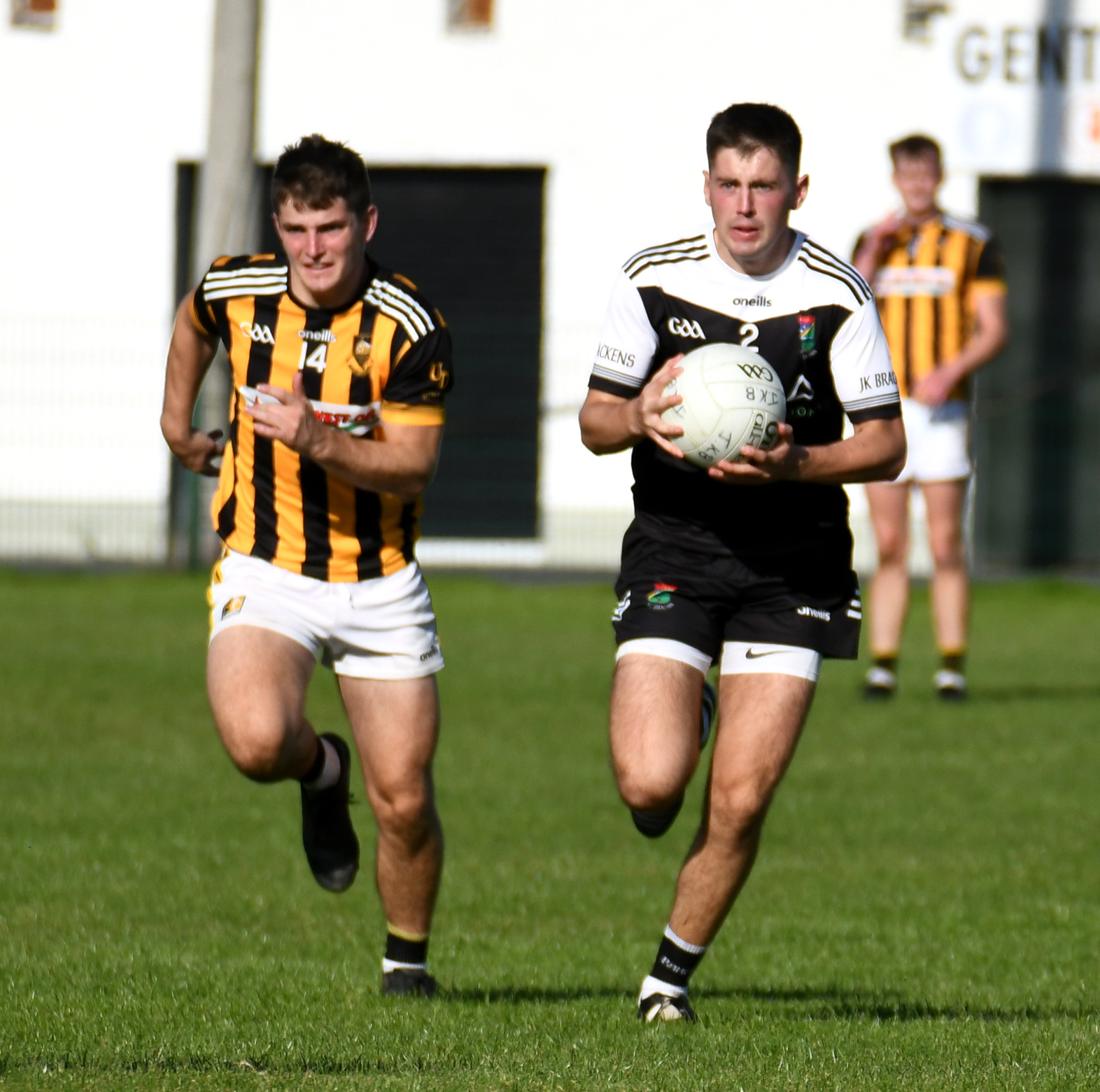 J K Brackens have been particularly strong in the second half of their games this year so their supporters were expecting a sharper focus on resuming but it was The Church who came out revved up and by the 40th minute they had extended their advantage to 1-8 to 0-6 as Brackens struggled to impose themselves. Luke Shanahan(2), Dean Carew and Paul Shanahan were the marksmen for The Church while Dean McEnroe and Conor Cadell responded for Brackens.

Just as it seemed Upperchurch were going to pull away, Brackens clicked into gear with three points in a row from Jack Kennedy and Lyndon Fairbrother(2), making an impressive entry, to cut the lead to two points going into the last quarter.
Some slack shooting now marred the Brackens recovery and ultimately cost them the contest but full credit to Upperchurch who were efficient on the counter-attack, Luke Shanahan and Conor Fahey points pushing them four clear as the hour mark approached.

Brackens were piling forward in numbers and had a Conor Cadell point but Upperchurch were equal to the challenge and with time on their side used possession well.

They had the final say when corner back Ailbe O Donoghue was up to support his attack, and showed them how its done with a neat point to clinch their place in the last four.