Callum Lanigan the top scorer in defeat of Killenaule 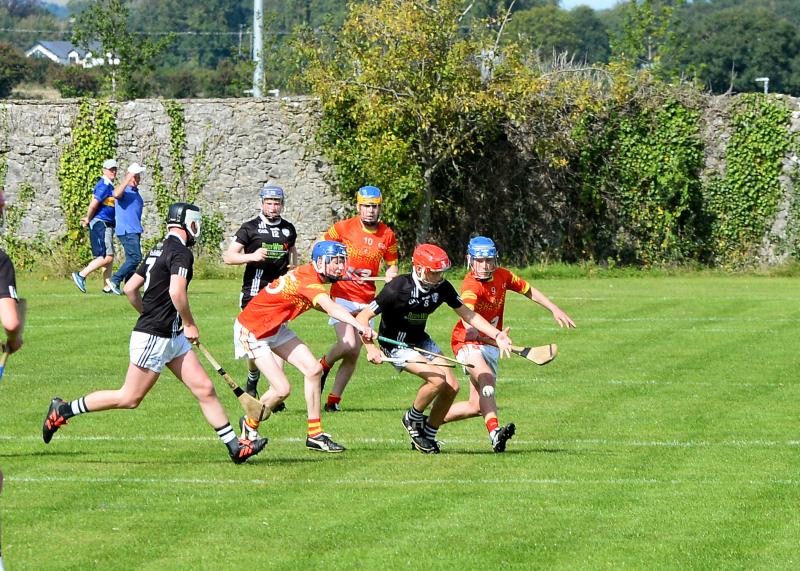 Carrick Swan's Stephen Tobin and Killenaule's Charlie Barrett and Shane Ryan were in the thick of the action during the South Under 17 A Hurling Championship final in Fethard. Picture: Michael Boland

A strong third quarter secured the Clonmel Credit Union South Under 17 A Hurling Championship for Carrick Swan at a sun-drenched Fethard last Saturday.
During that period the Carrick team scored 1-4 to Killenaule’s single point.
In a game played in front of a very large attendance, Swan had very solid performances from Aaron O’ Halloran, Stefan Tobin, Callum Walsh, Sean Foley and the standout player Callum Lanigan, who scored 1-11 (including 7 frees) over the hour.
Killenaule actually made the better start, scoring 1-1 in the first eight minutes. The goal came from Nathan Barrett and the point from a free by Oisin Shelly.
It was 10 minutes before Swan got off the mark with a point from a free from Callum Lanigan. In the 13th minute Stefan Tobin added a point from play before Darragh Doyle, Killenaule, scored a point from play.
At the end of the first quarter Callum Lanigan added a long-range point from play, leaving the score Killenaule 1-2 Swan 0-4.
The pace of the game and the rate of scoring increased in the second quarter. Callum Lanigan and Darragh Dunne added two points from play before Killenaule’s Oisin Shelly hit a great shot goalward-bound that Keane Harrigan got a hurley to to deflect over the bar.
Oisin Shelly added three great points from acute angles from frees to extend the Killenaule lead to four points.
Swan rallied before the short whistle with three points, two from Callum Lanigan, one free and a second point from the impressive Stefan Tobin, with Oisin Shelly converting a 65 metre free to leave the half-time scoreline Killenaule 1-8 Carrick Swan 0-9.
Sean Foley had been impressive in a sweeper role for Swan during the first half and on the restart Aaron O’Halloran scored a fine point.
The Carrick team then introduced Ronan Redmond for Aidan Walsh and they went into overdrive and were in control all over the field, scoring freely through Callum Lanigan (who scored 1-3, including 0-3 from frees), to a reply of just a point from a free by Killenaule’s Oisin Shelly. This left the score line Carrick Swans 1-13 Killenaule 1-9 at the three-quarter stage.
Swan extended their lead with a long-range point from Callum Walsh, which was followed by an exchange of points from Darragh Doyle and Callum Walsh.
Swan stretched their lead to six points when Callum Lanigan scored from play, while Oisin Shelly pointed a free to keep Killenaule in touch.
The Carrick team added two more points from midfielders Stefan Tobin and Callum Walsh.
Killenaule reacted with three pointed frees by Oisin Shelly. The final 10 minutes belonged to Killenaule, as they scored three points from play, but it turned out to be a little too late to make a dent in Swan’s lead, and they added the last point from a free by Callum Lanigan to run out deserving winners and march on to the county semi-finals.
Oisin Shelly, Nathan Barrett, Darragh Doyle and Fionn Fitzgerald gave their best for Killenaule.
Carrick Swan: Keane Harrigan, Daniel McCarthy, Ryan Hayes, Jack Walsh, Lorcan O’Sullivan, Aaron O’ Halloran 0-1, Harry Still, Stefan Tobin 0-4, Callum Walsh 0-3, Sean Foley, Callum Lanigan 1-11 (0-7 frees), Darragh Dunne 0-1, Callum Smith, Jack Hickey, Aidan Walsh.
Sub: Lee Casey.
Killenaule: David McCormack, Tom Ryan, Finn Nolan, Luke Ryan 0-1, Charlie Barrett, Padraig O’Dwyer, Luke Fitzgerald, Owen O’Dwyer, Shane Ryan, Thomas Maher, Fionn Fitzgerald 0-1, Jimmy Ryan 0-1, Oisin Shelly 0-13 (12 frees), Darragh Doyle 0-1, Nathan Barrett 1-0.
Subs used: Mark Maher, Darragh O’Gorman.
Referee: Tadhg Lonergan (Kilsheelan/Kilcash).