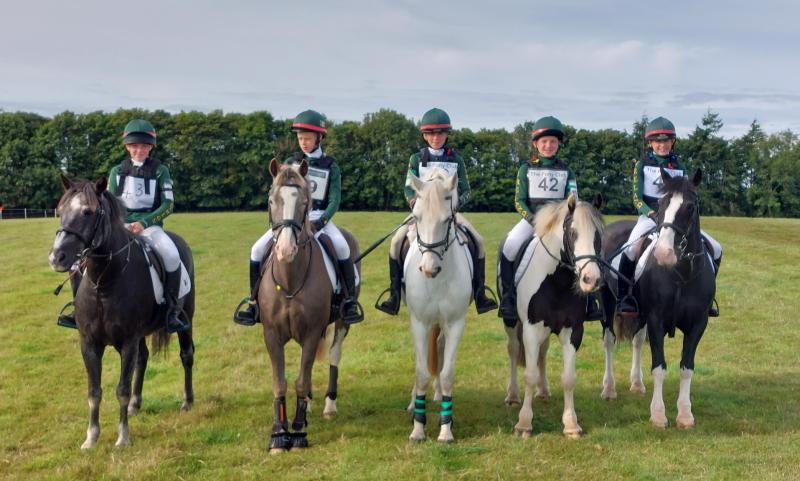 The Irish team, consisting of 5 boys and 5 girls, travelled to Scotland with their ponies (and families), to compete in The Pony Club Northern Minimus Tetrathlon Championships. The team was led by John Flood, Irish Pony Club Tetrathlon Chairman.

Tetrathlon is a challenging four phase competition consisting of Pistol Shooting, Running, Swimming and Cross-Country Riding. At Minimus level (under 12 age category) competitors shoot using an air pistol of .177 calibre at 7m air pistol targets from the standing position. Running is completed over a 1000 metre course and each competitor's time is measured. During the swimming phase competitors swim for a duration of 2 minutes and points are awarded for each metre achieved.

Jack Landy, New Inn who achieved individual succes at the Scottish event with a total score of 4,479, Jack won the shoot phase with a score of 980 and a clear round in the cross-country phase meant he retained all 1,400 points.

Individual success was achieved by Jack Landy (New Inn) with a total score of 4,479, Jack won the shoot phase with a score of 980 and a clear round in the cross-country phase meant he retained all 1,400 points. Jack was followed closely by Emmet Walsh, Patrick O'Callaghan, Jonty Purcell and Patrick Fitzgerald O'Connor. Julie McDonald (Waterford) won the girls championship with a score of 4,376 and Robyn Dempsey (Kildare) came third.

A strong cross-country course on day 2 offered a true test to each rider/pony combination with only 37% overall achieving a clear round scoring maximum 1400 points. Six of our Irish riders went clear with the other four not far behind.

A testament to the hard work and dedication from each of our team members.

While the success achieved was outstanding, the experience, friendships and memories will remain with each of these young athletes for a lifetime.