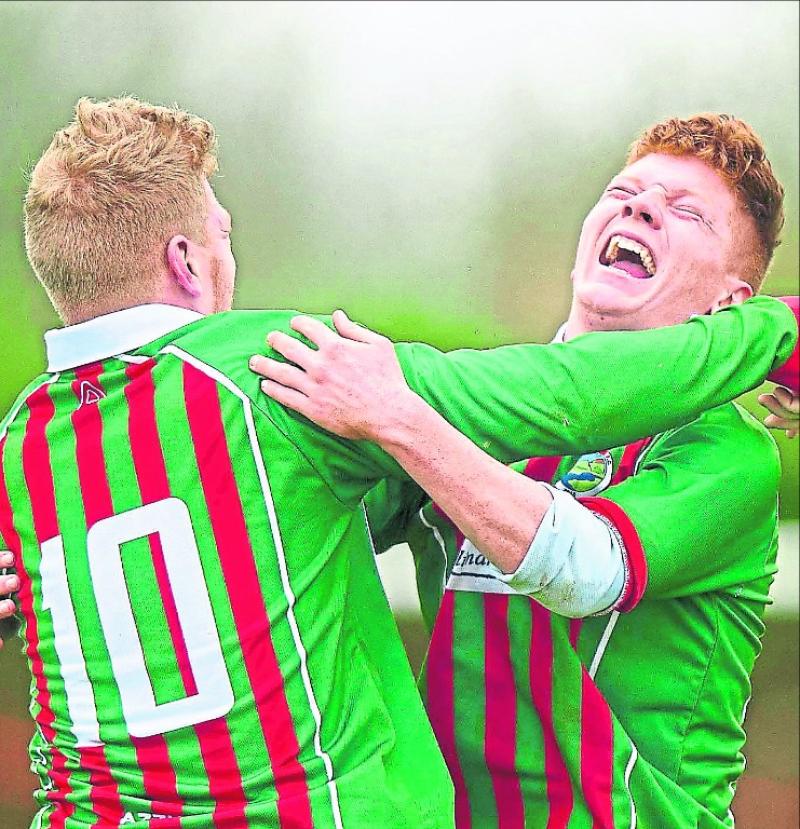 The Laslett brothers who both scored hat-tricks in Mullinahone FC's 11-2 win over Suirside on Sunday last in Division 2 of the Tipperary Southern and District League game played at Mullinahone.

In the South Tipperary and District League Division 2 game played at Mullinahone yesterday morning, the home team produced quite a performance when hitting the Ardfinnan side, Suirside, for 11.

The game was remarkable in that it produced not one, not two, but three hat-tricks, with the Laslett brothers, Ashley and Wayne, both bagging a memorable trio.

The understrength visitors travelled to 'Kickham Country' to take on a home side finally back to full strength and the result was a completely one-sided affair that pushed Mullinahone closer to the top of the TS&DL Division 2 table and chasing a second promotion in a row.

It was also a remarkable game in that the home side had the luxury of missing two penalty kicks, but with a hat-trick of hat-tricks from the Laslett brothers Ashley and Wayne and a third from Kevin Walzer, added to by a goal each from Mike Cooper and Tony Watters, they recorded their biggest tally since return to the TSDL two years ago

Suirside did get two goals themselves from Aaron Cowan and Jason Coffey but these were no more than consolation efforts on a day the Ardfinnan side will want to forget.

After McKevitt’s early first half goal James Harding equalised  for the visitors just five minutes into the second half. But it soon went rapidly downhill for Cashel Town thereafter.

Sean Wade put the Thurles side back in front with a well taken goal.

It was a four minute spell 20 minutes from the end that really changed the whole complexion of this game. Matthew McKevitt was on fire in scoring three goals in four minutes in what could have been the fastest hat trick in TSDL history to completely end this game as a contest.

Two more goals within a minute ten minutes from time scored by Pippy Carroll and James O’Sullivan made the game an embarrassment for Cashel, and a final goal four minutes later for Carroll again, turned the tie from comedy to farce.

Peake Villa on this performance are going places again, while Cashel are only going in one direction and that is downwards.