Terryglass Arts Festival kicks off for five days of music, art, drama and plenty for everyone 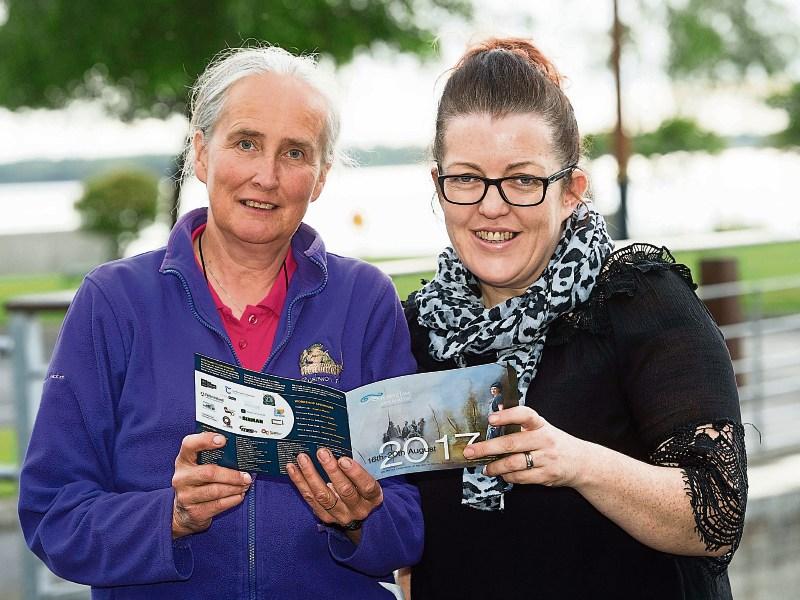 Gerardine Wisdom and Clodagh O'Flynn at the launch of Terryglass Arts Festival, which runs until Sunday, August 20, in the lakeside village

Five days of drama, comedy, music and arts and crafts are due to begin this Wednesday, August 16, with the opening of the 19th Terryglass Arts Festival.

The event, one of the major highlights on the country's arts calendar, is due to be opened by Cllr Phyll Bugler, Cathaoirleach of Tipperary County Council.

There will be some road restrictions around the festival over the coming days and motorists are being urged to excercise caution on the lakeside village's roads.

A large attendance is expected for the opening in Terryglass Hall which will be followed with music by local musician Jamie Lee Forde and performance poetry from Richard Brennan. There will also a screening of Love and Friendship, based on Jane Austen’s comic gem novella, Lady Susan. Filmed entirely in Ireland, this 2016 film is is a delightful jaunt where manners and social standing are key, and a lady is only as good as her last husband. Admission €5.

“The festival has received tremendous support and good will from our local community here in Terryglass and I would like to extend a warm invitation to members of the public to attend the official opening and support our opening programme this evening,” said festival co-chair Aoife O'Rourke.

Headline acts include Kíla, one of Ireland’s most exciting and innovative bands. Kíla will perform in Terryglass Church on Friday, August 18, at 8.30pm. Admission €25.

Drama and comedy takes centre stage in Terryglass Hall at 8pm on August 17 with a performance of Katie Holly’s one woman show Marion, “a comedy inspired by a decade of being an embarrassing singleton in Ireland, during and after the boom.” Admission €12.

This year’s festival is a celebration of the visual arts with the appointment of its first ever artist in residence, Jenny Fox, who will create an installation entitled The Places In Between based on two interlinked areas an exhibition, containing finished paintings; and a re-creation of her studio. The event takes palce in Old Church from 11am to 5pm daily.

Damer House Gallery, in collaboration with Terryglass Arts Festival, presents Homeland - a selection of short films that document life and livelihoods in Ireland’s towns and villages, in Terryglass National School 11am to 5pm daily.

Tipperary-based Lynn Kirkham will host two drop in workshops on Friday 18th and Saturday 19th August to create artworks based on plant life.

The festival will host a bumper programme of 60 workshops providing a weekend bursting with fun filled entertainment for all the family.

There will be a change to previous years on Saturday with non-stop entertainment in the village from 5pm. The evening events kick off with a screening of Song of the Sea at 5pm, and is followed by live entertainment with circus skills, mime artists, stilt walkers, a juggling show and live music from One Horse Pony, followed by the fire show finale.

The festival concludes on Sunday, with a food and craft fair, street entertainment with Grant Goldie and free music entertainment from the dynamic and culturally diverse Galway Street Club, a 14-piece collective of buskers based in Galway. They will be joined by band members from Ireland, Spain, France, Germany, US, Russia and Argentina, for an energetic set of reggae, folk, trad, ska and rock.