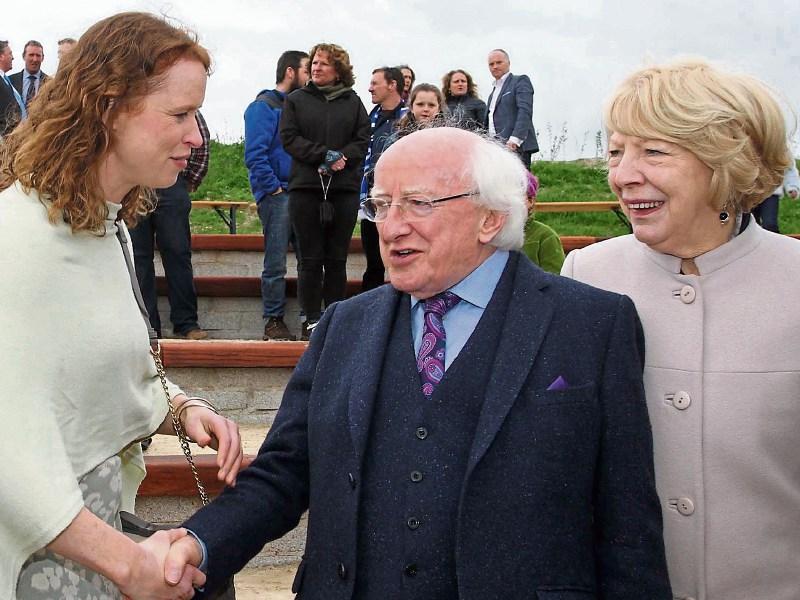 Over 300 people turned out at Cloughjordan's Ecovillage to see President Michael D Higgins give a sparkling performance as he opened the village's new amphitheatre.

Ms Drysdale spoke of how MacDonagh was inspired by the beauty of the environment and read from the poet and patriot's work, Knocknacree.

She said her great-grandfather appreciated what the arts could do, not just for children, but for family and community and the work ethic.

“Creating a performance is a team effort,” she said.

President Higgins spoke of the legacy of MacDonagh, who, he said, “understood that you must have integrity and imagination to allow everything in without restrictions or censorship”.

He pointed out that the event was taking place on the eve of Earth Day and one year after the Paris climate agreement had been signed, saying Cloughjordan was “putting Paris into practice. You are using science for what it should be used for and not for war or mindless consumption.”

Lamenting the decline of the co-operative movement, President Higgins said that a lot had been achieved by the people who came together and co-operated eight years ago to set up the ecovillage.

Remarking that the village had gone from three houses to 55, with more to come, he said it was important that this had been done by merging and bonding with the existing village.

The 200-seat amenity, which was designed by village resident Martin Canny, has cost €70,000 to date, with funding coming from the Department of Arts, Cutlure, Heritage and the Gaeltacht, Tipperary County Council, local fundraising and the JVM Trench Trust. It is built from the spoil of digging out the village

On behalf of the trust, the Rt Hon Salters Sterling said that they were delighted to provide funding as it was in keeping with the vision of Patrick and Julie Trench, for whom the arts had “made life delicious”.

As part of the opening, Hollywood actor and local resident Patrick Bergin read Francis Ledwidge's Lament for Thomas MacDonagh, while music was performed by local musicians Weave along with Angela de Burca and Deirdre O'Leary.